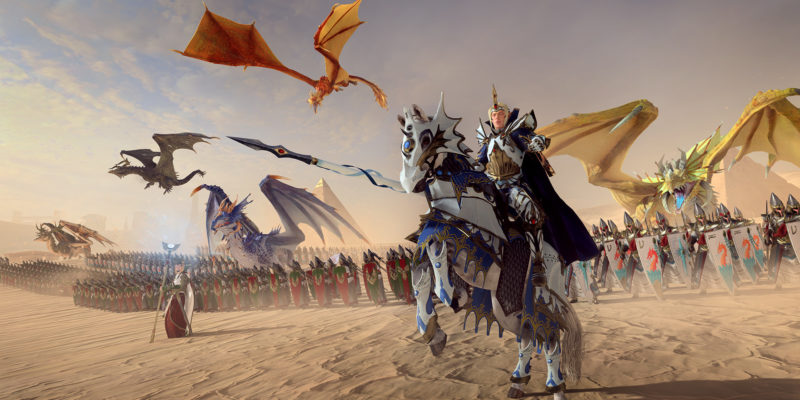 The first few steps in Prince Imrik’s Total War: Warhammer II Vortex campaign are quite easy enough. All you need to do is build a Rally Field and research a tech (both provide you +500 gold and +1 influence). The other mission is to occupy any settlement held by the Dune Kingdoms (+1,000 gold and +8 way-fragments to get you started on your rituals). 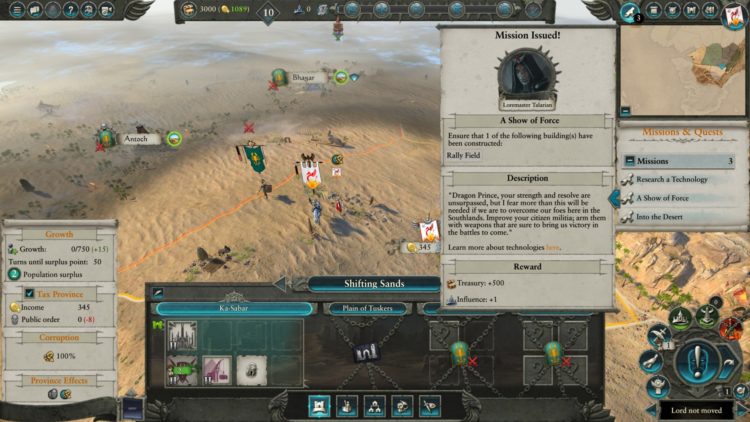 The next question is: Should you be auto-resolving battles? In my opinion, you shouldn’t try to as Imrik especially when you’re facing the Tomb Kings. Given their weakness to fire and your army’s propensity to scorch everything around them, you won’t find any issues trouncing early-game armies.

The general idea is to have Imrik and your Dragon Princes charge opposing forces head-on, provided that you’re not running straight towards spearmen. With this distraction, your other units should be able to advance unmolested. Don’t forget to have your Sun Dragon incinerate the undead with its breath attack: 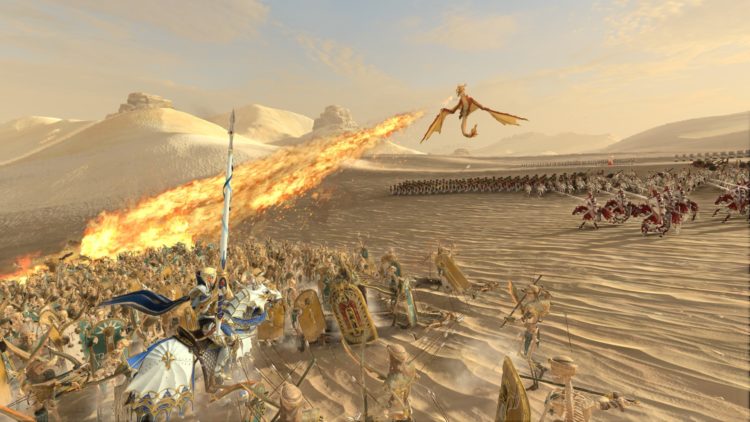 Much later once Imrik and Mikaela have leveled up — and after you’ve recruited more infantry units — the goal is to let your lines clash with the enemy’s. With Imrik popping his armor-piercing, charge, and flame buffs, get Mikaela to cast The Burning Head or Flame Storm and watch hostiles melt like butter:

Note: You should stick to your own lands and recruit additional troops before you end turn 1 rather than quickly marching for Antoch. This will be important due to an upcoming quest. 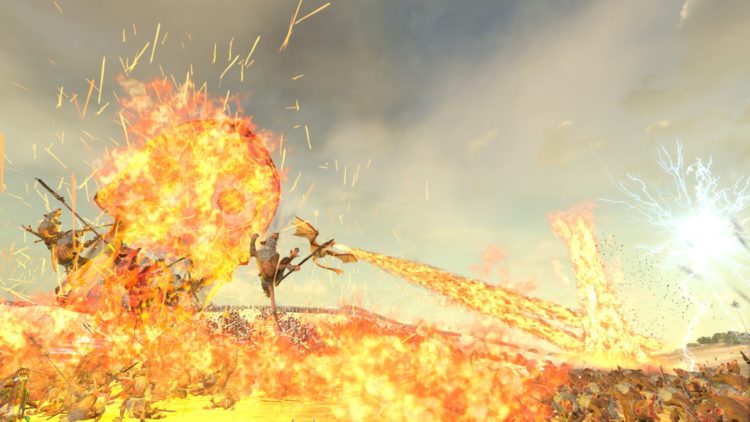 Diplomacy and Confederation with Caledor part 1

On your second turn, you should get a very important quest to occupy, loot, sack, or raze six different settlements. Here are the rewards:

Confederating with Caledor is very important since it gives you a foothold on Ulthuan. Likewise, you’ll be able to play the diplomacy and influence game with the other High Elf factions (perhaps confederating with them in turn). Of course, you’ll control Vaul’s Anvil which lets you collect way-fragment resources for your Vortex ritual as long as you have an Ancient Waystone building.

Note: Now that this quest is active, capture Antoch and get 1/6 settlements in the tally done. 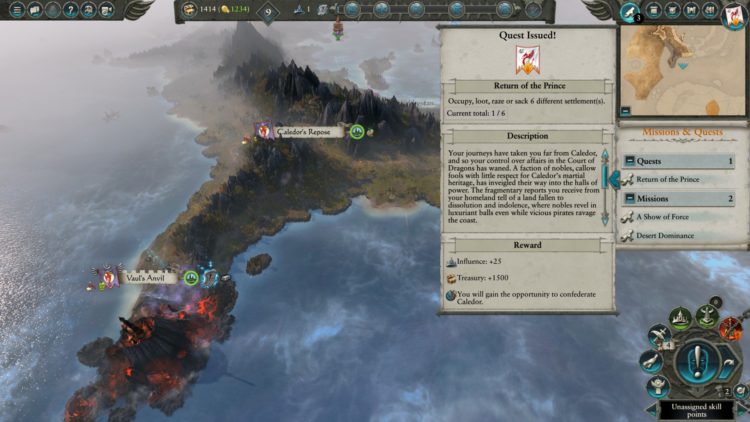 You’ll get another set of quests on your third turn:

After you take over Bhagar, you should be able to enact diplomacy with the undead factions. Go ahead and have trade agreements and NAPs with Settra (Khemri), the Rakaph Dynasty, and the Strygos Empire. Avoid defensive or military alliances so you don’t get embroiled in their conflicts. 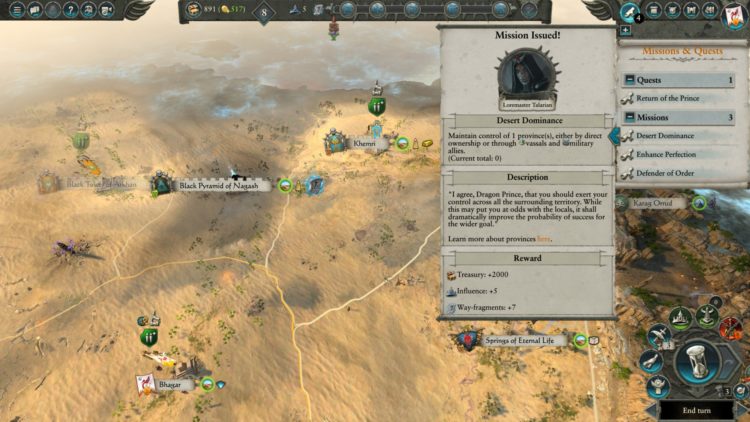 You’ll get a couple of new missions in a few turns: 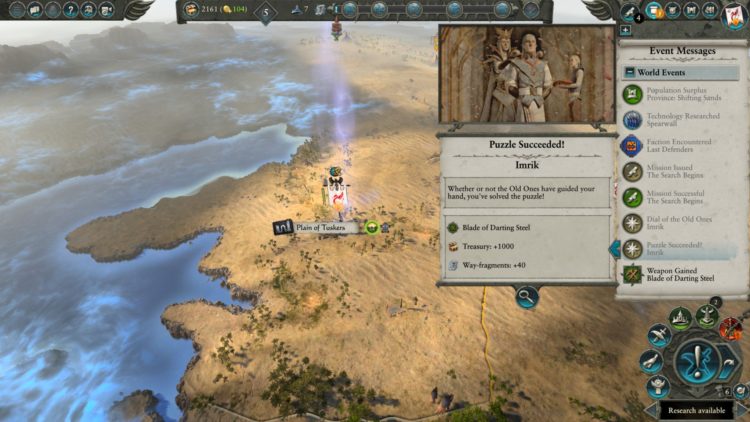 If you’re buddy-buddies with the shambling dead, then you should head south to eliminate the Leaf-Cutterz Greenskins. They’re likely at war with the Bowmen of Oreon, the Last Defenders, or Tlaqua (heck, they’re probably at war with all three). That should let Imrik make new friends with other races.

You’ll get even more missions after this:

Note 1: You’ll likely have your first Dragon Encounter around this time as well, so head over to our Dragon Taming guide for more info. 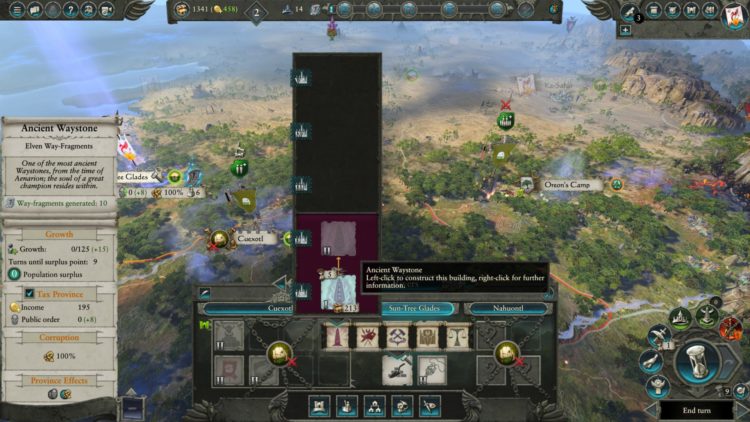 Diplomacy and Confederation with Caledor part 2

If you’re quick (and lucky), Imrik’s army can capture two additional settlements in the Northern Red River province (Cuexotl and Nahuontl) held by the Leaf-Cutterz before the Lizardmen factions do. This will complete the settlements tally (6/6) and the decision to confederate with Caledor will pop up. Here are the options for this dilemma:

The first option is easily the best since Ulthuan will remain relatively safe throughout your Total War: Warhammer II campaign. Caledor will be yours (along with its Waystone building), and you can start buddying up with the other High Elves of Ulthuan once the confederation penalty elapses. Just remember to disband some of Erethond’s troops because his army can be costly. 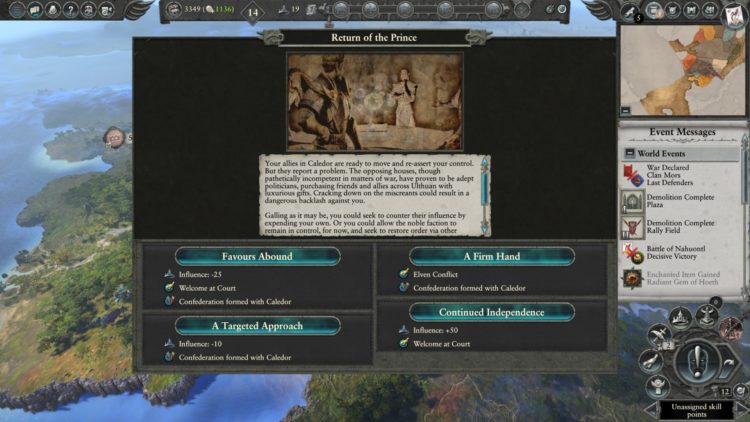 Although the luck dragon, Falkor, isn’t one of them, Prince Imrik is still able to field multiple unique dragons to his side. These powerful units will, undoubtedly, completely change the way you approach Total War: Warhammer II‘s campaign. Given his buffs to dragon units and Dragon Princes, as well as the Fire Mage Mikaela, you’ll soon become unstoppable, aggressively annihilating anyone who gets in your way. Now that Caledor is yours, Ulthuan is ready for the taking whether by force or by diplomacy. 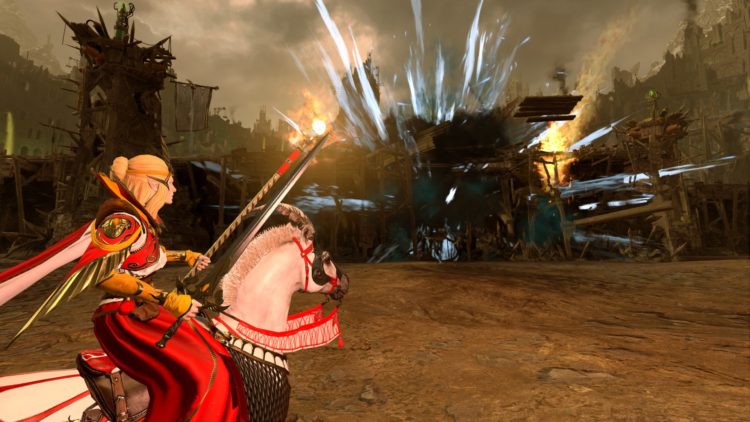 As for the remainder of the Vortex campaign, be reminded to defend your fonts of power from intervention armies. If you secured your flanks in the Southlands (with the Tomb Kings to the north and the Lizardmen to the south), then you’re free to expand anywhere you please. Perhaps you could conquer Sudenberg to gain a port city and have trade agreements with your High Elven cousins.

In any case, after many turns, you’ll encounter even more unique dragons to battle. Knowing that you’ve leveled up and improved your army, you’ll be more than prepared to handle these challenges. Don’t forget that these unique dragons can be swapped back and forth your armies at no extra recruitment cost or turns, allowing you to muster all the “firepower” you need in areas that are being attacked by Chaos or intervention armies. 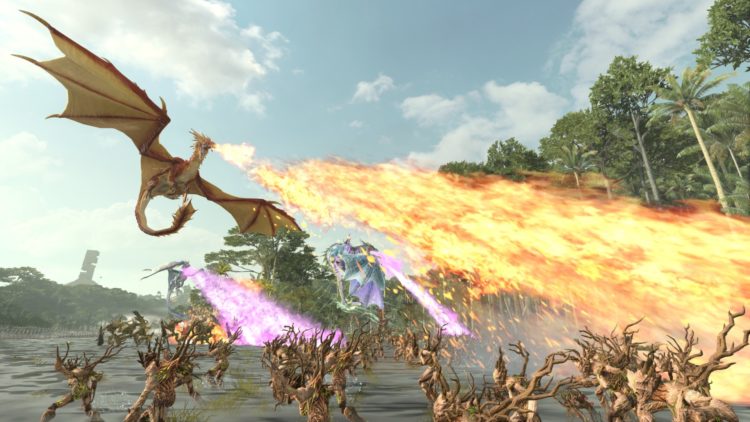 Total War: Warhammer II – The Warden & The Paunch is available on Steam. Since Prince Imrik is a free/FLC lord, you’ll simply need to download him separately. For more information about the latest add-on, check out our guides and features hub.