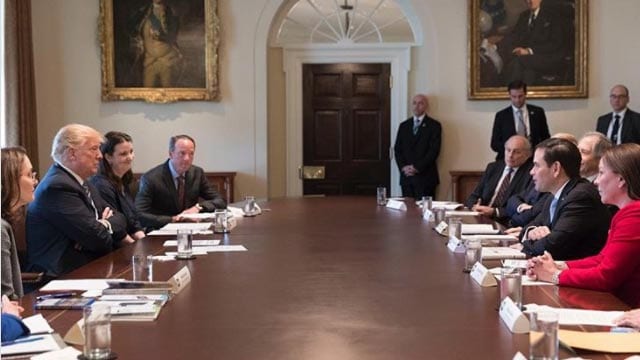 For the past couple of days, we have been waiting to see hear the outcome of President Donald Trump’s meeting with the video game industry on violence in video games. The meeting was called in the wake of the recent Florida shooting in which seventeen people lost their lives. The meeting took place this evening with representatives from the video game industry including the ESA, the ESRB, and executives from Bethesda and Take-Two.

A statement from the White House was issued following the meeting:

Today, President Trump and senior members of the Administration met with leaders in the video game industry and experts on violence to discuss violent video game exposure and its impact on our children.  To date, the Administration has led many discussions about how to prevent violent behavior in our schools, with a focus on stopping those intent on committing mass murder.  During today’s meeting, the group spoke with the President about the effect that violent video games have on our youth, especially young males.  The President acknowledged some studies have indicated there is a correlation between video game violence and real violence.

The conversation centered on whether violent video games, including games that graphically simulate killing, desensitize our community to violence.  This meeting is part of ongoing discussions with local leaders and Congress on issues concerning school and public safety and protecting America’s youth.

During the meeting, clips of violent scenes from video games were also shown to all in attendance which included scenes from games such Sniper Elite 4, Call of Duty, and Fallout 4. The 1 minute 28-second clip was also posted on the White House Youtube channel. After it was shown Trump commented, “This is violent, isn’t it?”.

Following the meeting, Rep. Vicky Hartzler (R-MO)  issued a statement via Twitter which said, “Today’s meeting was an opportunity to learn and hear from different sides about concerns and possible solutions to violence in schools. I believe significant progress was made today, and my hope is that we can build on this progress in the future”. The ESA also issued a prepared statement following the meeting.

“We welcomed the opportunity today to meet with the President and other elected officials at the White House. We discussed the numerous scientific studies establishing that there is no connection between video games and violence, First Amendment protection of video games, and how our industry’s rating system effectively helps parents make informed entertainment choices. We appreciate the President’s receptive and comprehensive approach to this discussion.”

By all accounts, today’s meeting was non-conclusive and a waste of time, but in the wake of the horrific Florida school shooting, the President is at least attempting to look like he’s addressing the issue. Unfortunately, the problem of easily available firearms is not being looked at close enough and that is the real problem and primary cause of gun violence in the US.

This was not the first time, and it certainly won’t be the last, that video games have come under the spotlight in the wake of a mass shooting and no doubt the discussions will continue with President Trump in the weeks ahead.