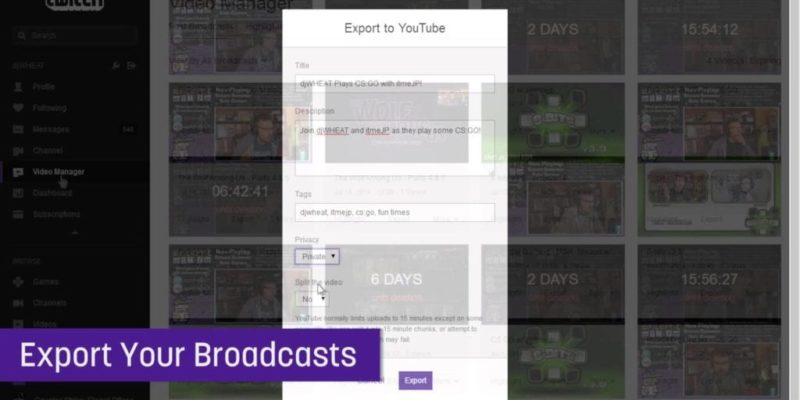 Twitch has been analysing their video storage data and decided that old videos will be removed from accounts.

In three week old videos stored on Twitch accounts will be removed in an effort to provide users with a better experience. Based on their viewing data it’s become apparent that old video are not being watched so to provide better VOD quality and to allow viewers to watch them on mobile and other platforms, they will be removed.

Don’t panic though. If a VOD is made into a highlights reel of under two hours, the video can remain in the Twitch system. How long a full video is stored on the system before being removed will also depend on their membership tier. The new system will work as follows.

Twitch released a video to explain the new system and updated Video Manager which might make creating highlights a little easier. You can of course export your videos from the Video Manager directly to Youtube.

Twitch state that these changes are not being made to save on storage and they want to improve the service in the following ways.

The removal of VODs has not gone down well with the Twitch community, and even though there are some tools in place to help with creating highlights, the Twitch interface is still a pain to use and it’s going to be more work for casters. Videos that require longer than two hours such as speed runs or playthroughs may also struggle with the new changes.

To answer more questions on the above, a Reddit AMA is planned  via /r/Twitch on Thursday7 August at 10:30am PST.

You can always try the new GamingLive.tv service if you think all this is going too far.

Update: Now audio will be flagged for copyright. Read more…

Watch the Hellraid weekend gameplay stream of the E3 demo