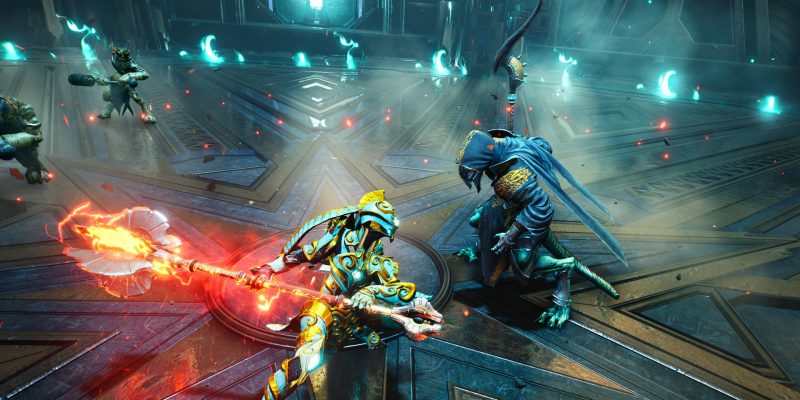 Gearbox’s E3 show featured few announcements that fans had not already been aware of. Many of the announcements and trailers already appeared during the Summer Game Fest two days prior. One of the rare bits of new information came in the form of two new expansions for Godfall, the “loot-slasher” action RPG that released in late 2020. One of the updates, called the Lightbringer update, serves as a free content patch, while the other update, dubbed “Fire and Darkness,” will be the game’s first paid expansion.

According to Senior Technical Producer Dick Heyne, Fire and Darkness will allow players to explore the Fire Realm. In this new location, players tackle a whole host of unique challenges, bosses, and enemies while earning new trophies and other bonuses. The Lightbringer update will introduce a new endgame loop in which players “fight off the darkness that threatens Empyrean” to obtain a new loot type. This loot type grants players specific objectives to complete, after which they will “lift the curse.” Heyne also ensured that both expansions will add a wide array of unlockable cosmetics to the game, as he and the other developers “want to make fashion the forefront of Godfall.”

A major update to an unpopular game

Godfall received a rather mixed reception from critics upon release. The game earned an overall score of 59 on Metacritic, with reviewers criticizing the title for its repetitive missions and uninspired mechanics. Despite these issues, critics generally agreed that the game’s combat and visuals were of high quality.

Regardless of Godfall’soverall reception, fans of the game certainly exist, and they are likely more than happy to hear about the hefty degree of support it will receive. Alongside news of the upcoming expansions, Heyne also revealed a new matchmaking beta for Godfall, which intends to help players struggling through the game. This beta will arrive alongside the expansions on August 10.