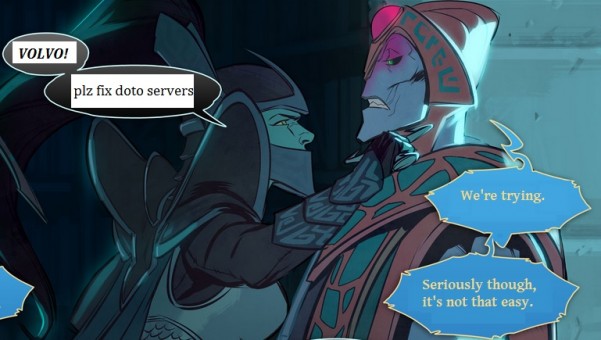 Dota 2 has been hamstrung by server problems – particularly on US East and EU West – for the last week, and Valve have now posted up details on how they’re dealing with it.

According to the post, the network problems Dota 2 players have been experiencing for the last week primarily stem from connectivity rather than from limited server capacity. Two specific issues are down to DDOS attacks, and one is down to ISP connectivity.

First are the DDOS attacks on the data centre for an entire region, which is the problem most players are having. This is apparently a “recent type of attack” which saturates the entire connection into the data centre, and basically makes players freeze up or drop from games because the data centre is basically incapable of accepting them. This is also apparently the type of attack that’s been hitting a number of high-profile games, of late. Right now Valve are having to respond to these on a “case-by-case basis”, but they’re “building out a long-term infrastructure to bring better stability and protection.”

Second are DDOS attacks on single game servers, which have been generally targeted at pro players and specific tournaments. The attacker could pinpoint the IP address of the server on which the match was being played, and then attack just that one server. Dota 2, Dota TV servers, and Steam have all been updated to make it harder to pinpoint that address, and the local lobby system has been improved so that tournaments can fall back on that in case the IP address is leaked anyway.

Third are network connectivity issues with particular ISPs, which is apparently most common in the South East Asia and South American regions. There’s apparently no simple solution for this, but Valve are working on it and have implemented a new network monitoring system so that they’ll get more data from players and can hopefully work out where the issue lies and how to resolve it.

The short version, then, is that it should be harder for arseholes to attack individual games, and the ISP-related problems will hopefully be resolved before too long, but the attacks on entire regions are likely to continue for at least a little while longer. Not exactly ideal, but it’s good to have confirmation that Valve are attempting to address the problem.

On the plus side, this week’s update (which may or may not be Oracle-related) will include improved detection of Poor Network Conditions, so that DDOSed matches won’t count towards your stats. “Previously, our detection algorithm was only triggered when multiple players completely lost connection to the game server,” reads the update. “This new algorithm will now monitor the actual quality of the server’s connection to its players, and trigger in the case of poor connectivity for multiple players.” In short, you can (hopefully) safely play Ranked matches without fear of losing MMR due to the servers being hit.

On the downside, I wonder how accurate this is. I mean, if I’m on EU West and people with terrible ping from halfway around the world are also playing on EU West, is that going to trigger Poor Network Conditions? We’ll have to wait and see.

That, or this is the weirdest Day 2 post for the Oracle update I could’ve imagined.