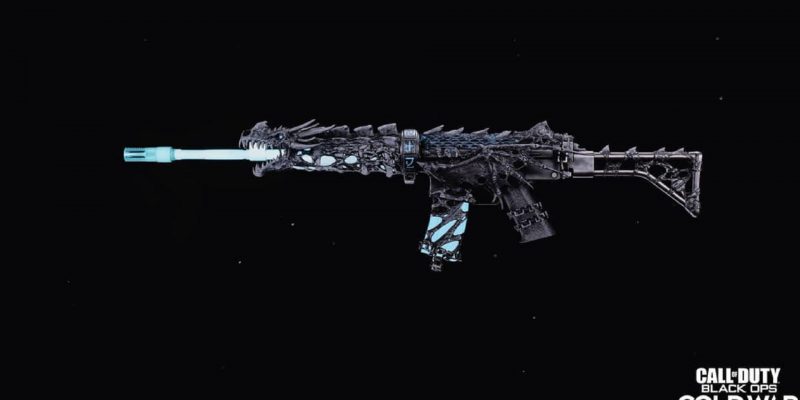 The Call of Duty in-game store is always full of various bundles for players to purchase. This allows you to get your hands on some brand new items including skins, calling cards, weapons, and more. The NecroKing bundle launched into Call of Duty: Black Ops Cold War and Warzone on March 21. However, not long after it was released, the NecroKing bundle was removed from the in-game store. The bundle had some significant bugs that released alongside it which caused players significant problems.

The NecroKing bundle contained the most unique weapon skin that has been released into the store to date. The weapon skin is for the Krig 6, is dragon-themed, and has unique visual effects such as dragon wings which deploy when inspecting the weapon. Unfortunately, the bundle appeared to be more problematic in Call of Duty: Warzone than multiplayer.

For starters, the weapon has various visual issues, making the gun not look as intended. A clip was posted on the Call of Duty: Warzone Reddit page, showing a comparison between how the Mastercraft was supposed to look and how it did look when purchased. As you can see, the weapon does not closely resemble the intended design. In addition, various other players have commented on bugs they have experienced with the NecoKrig Mastercraft in Warzone. One player outlined that if you use the weapon as your loadout, you are left with nothing in the game, not even your fists. Also, a couple of players stated that they kept getting booted form the in-game store since the bundle was added.

The response to the Warzone NecroKing bundle issues

Activision was quick to respond by temporarily removing the bundle from the store. In a tweet, the developer also outlined that using the 16.5” Ultralight Barrel attachment fixes problems specific to Warzone. At the time of writing, it is unknown when the bundle will be available to purchase again. If you purchased the NecroKing bundle before it was removed, you may not want to use it in Warzone for now as it could cost you those all important wins.

We're aware of Warzone-specific issues with the NecroKing bundle when using the default Barrel on the "Ice Drake" Blueprint. Currently, attaching the 16.5" Ultralight Barrel fixes this issue.

The bundle will be temporarily removed from the Warzone Store while this is addressed.

Resident Evil: Welcome to Raccoon City is the title of movie reboot