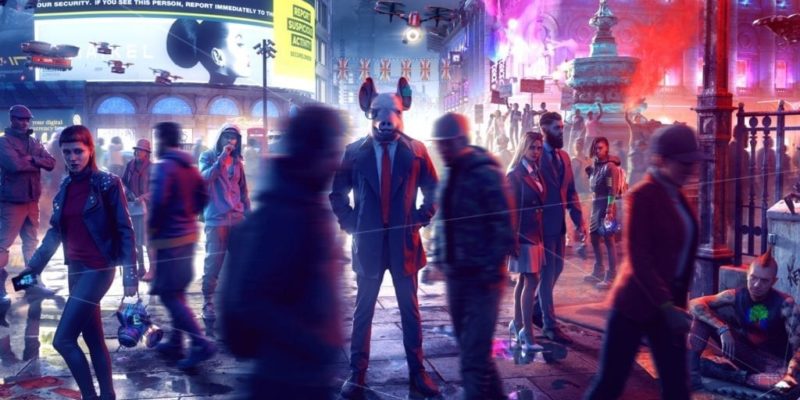 Even on paper, the concept behind Watch Dogs Legion seems like a huge undertaking. Firstly, the main mechanic in the game is that you can play as anyone. You can hijack, track, and then recruit any NPC on the streets of London to have them join your regime of hackers. However, after sitting down and spending some time playing the game, I couldn’t have been more surprised how well it was executed.

Exploitation at its finest

The trailer for Watch Dogs Legion does a great job previewing exactly what this game is like. For starters, the game builds on the previous games in the franchise further expanding your hacking capabilities. The trailer shows off the capabilities of how you can gain information on the various NPCs within the game. After profiling a person, you can then start to track their everyday habits. This is done so that you can exploit their daily routines, learning more about them and ultimately the possibility of recruiting them to DedSec.

Granny’s got a gun

One of the main focal points in the reveal trailer for Watch Dogs Legion was the elderly group of hacker women. This was a great way to emphasize that anyone in the world of Watch Dogs can join up and become an effective hacktivist. So, in the hands-on demo for the game, this is precisely what I wanted to do. 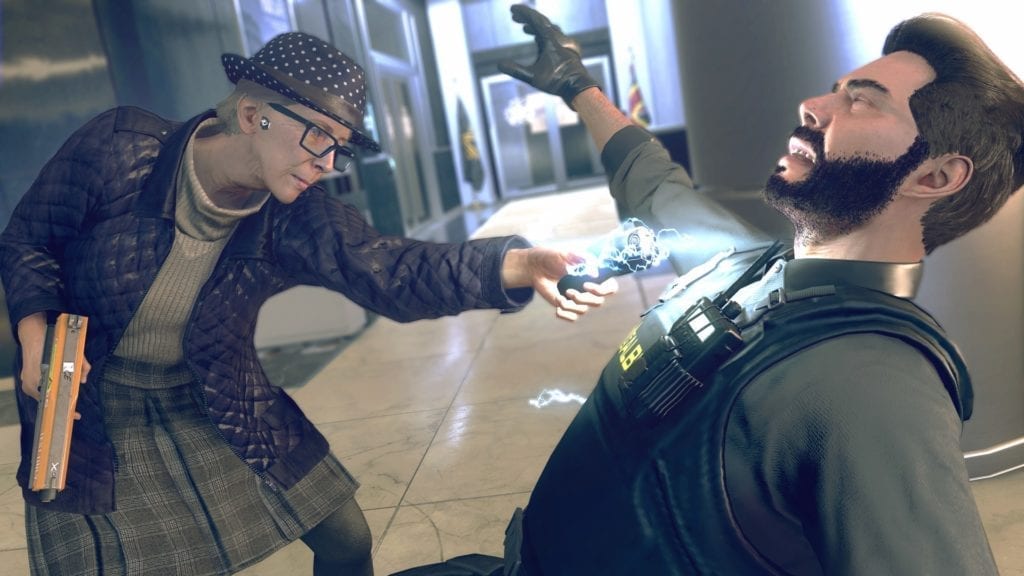 From the start of the demo, I was in the shoes of granny, ready to start my hacking spree on the streets of London. The first order of business was to start observing the strengths and weaknesses of the citizens of the busy city.

In Legion, surveillance is king. There are CCTV cameras just about everywhere, not to mention drones making unwanted appearances. This allows certain people, like grandma, to hack these and use them to gain information. I ended up learning more about a face tattooed gentleman who seemed like he would be a great ally to groom.

When you gain intel on people within Watch Dogs Legion, it will open up a window that shows their like or dislikes towards DedSec. For example, in scanning some of the NPCs for consideration, it was even noted that some of the people ran DedSec fansites. Although this might be true, it doesn’t mean that they are one-hundred percent on the side of the hacker community. This meter acts as an indicator as to how much work will be cut out for you in swaying their opinion about the group — and, most importantly, how much work it will take to bring them over to your side. 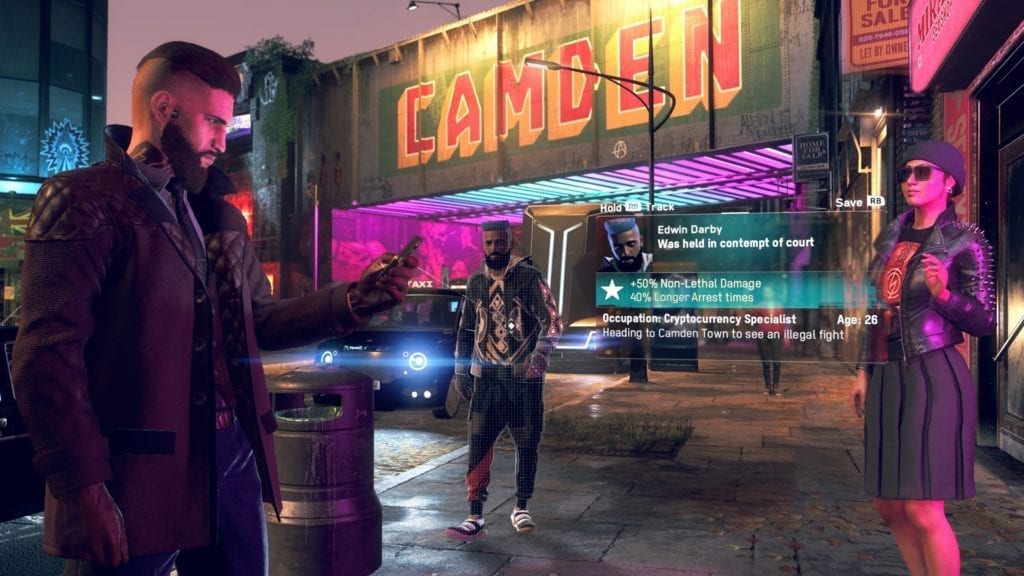 The first person that I approached would only join if I could wipe their record clean. When I asked the NPC if they would join if their record was completely wiped, they replied, “I’d swear a blood debt to anyone that could do that.” This meant I had to infiltrate a security headquarters and hack my way into the offices in order to wipe the servers clean.

When I made my way into the offices, I had to power down the metal detectors, hack the guards, and then find my elderly self to the server room to accomplish my task. This would have been much easier if I hadn’t donned my pig mask and showed my true allegiance to the hacker group. 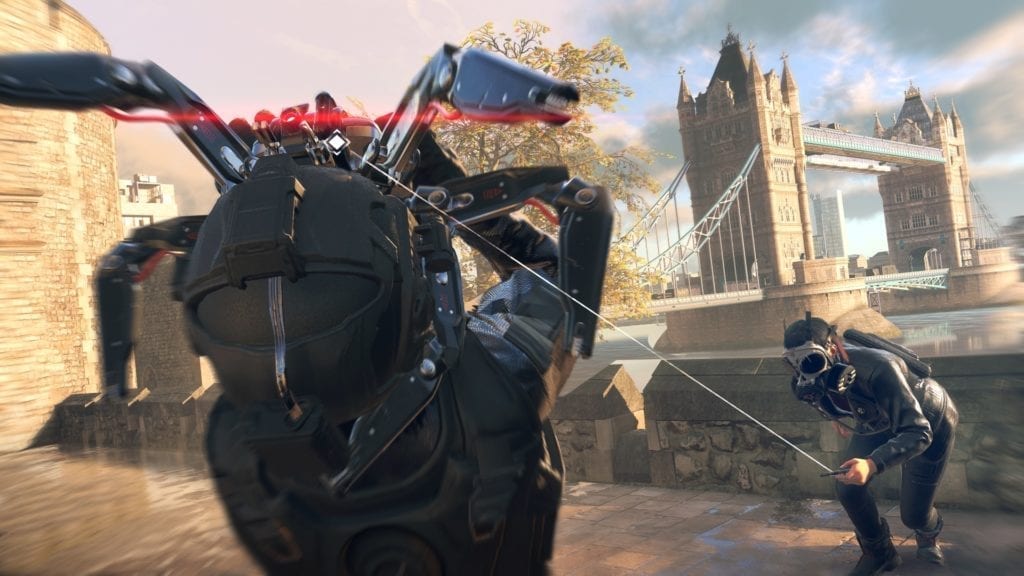 With a bit of ingenuity and some wispy blows thrown by my senior citizen fists, I made it upstairs to do so. Of course, I did have to drop some spiderbots, one of the other abilities of hackers, in order to act as a turret and hold off some guards while I did my work. Then, it was a leap of faith out of a second story window to safety.

For the sake of the demo, the meter for DedSec allegiance immediately turned to green after the server wipe so that new missions would open up. Ordinarily, in Watch Dogs Legion, you would have to do multiple favors in order to bring them from red (dislike) to green (extreme like) and then recruit them to join DedSec. Once you accomplish this, you can assign them a skillset and abilities. So in this case, I was able to assign them as a hacker, giving them additional abilities like having another spiderbot to drop to make situations like the security building infiltration an easier task.

One of the last pieces of the demo I played focused on the driving. This isn’t just about jumping in a vehicle and driving towards your next objective. Both your team and objectives are available in the game menu. This is where you can view upcoming missions and your squad you’ve assembled. 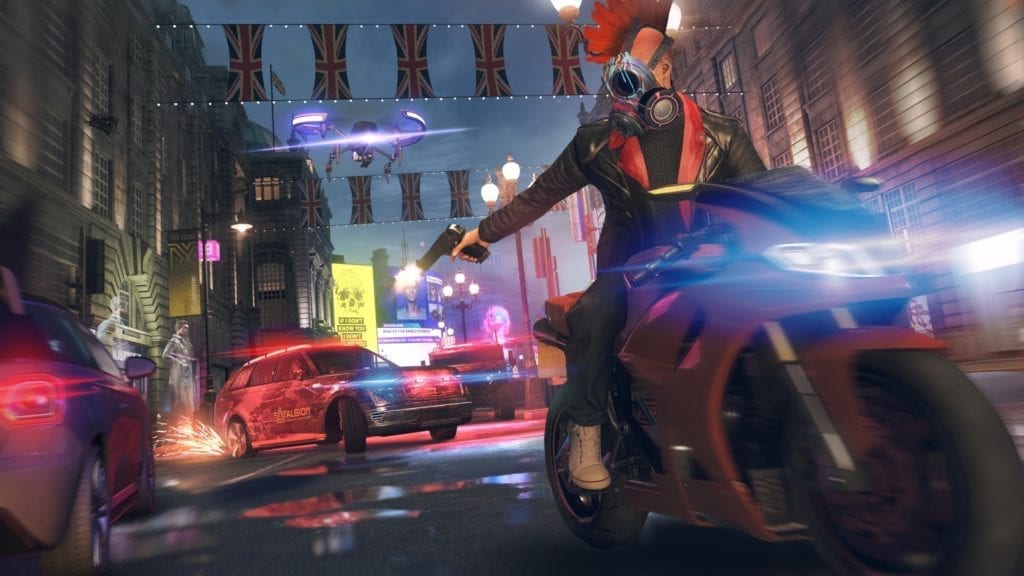 When heading towards a location, you can drive yourself or simply set the car to autopilot, a la Tesla, and let the computer do the steering. This small inclusion lets players enjoy the surroundings and the simple additions to the game, all while heading to a destination.

Although the demo session was rather short, the one thing that really stood out was the audio. Even in short conversations where I was gaining intel, I could hear how busy the city was around me. In the distance there were people fighting with the man, yelling in the streets, and people just going about their daily business. This gave the world an exceptional layer of depth, providing several layers of world building during my brief session.

The depth that Ubisoft has built for Watch Dogs Legion utterly surprised me. The approach to each mission, NPC, and hacking abilities promised much more to come for the rest of the experience ahead. I honestly am more excited about the game after spending some hands-on time with it, and if you’ve been a Watch Dogs fan over the years, I most definitely think you should be too.

Watch Dogs Legion will release on PC, Xbox One, and PlayStation 4. It arrives on March 6, 2020.