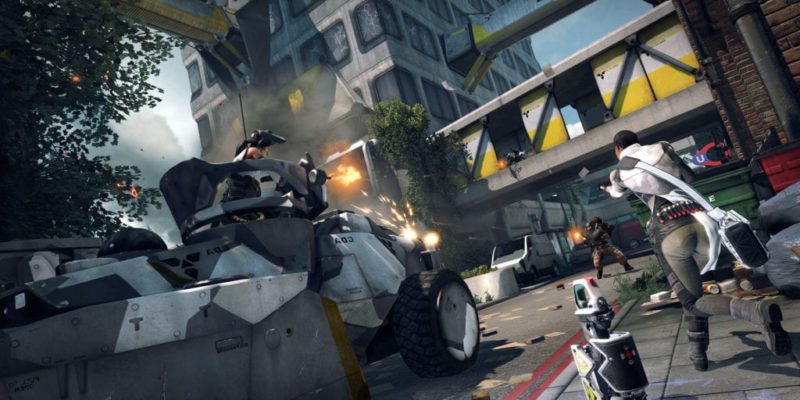 For the past few weeks I have struggled to find a game I want to play on a regular basis. After Epic canned Paragon there was a void that needed to be filled. A game where I could dive in for a few games then call it a day. After looking through my Steam library and trying out a few things I had never tried before, I found myself looking through the list of games I had for something that was multiplayer and required team cooperation. I then spotted Dirty Bomb.

I was actually a Dirty Bomb Founder and quickly signed-up when Splash Damage was funding the game themselves prior to Nexon getting involved.  I was a huge fan of their work on Quake Wars: Enemy Territory so it seemed like a no-brainer to back their new project.

When Dirty Bomb eventually released for testing I admit I was slightly disappointed with the direction. I loved Quake Wars for its large levels with open spaces that allowed for vehicles. Dirty Bomb was going in another direction, tight levels that encouraged close combat. I really tried to stick with it but struggled to enjoy it enough. My aim and reaction time is not what it was twenty years ago and that was also proving a problem.

Last week I fired the game back up for the first time in a long time and decided I was going to persevere this time and get to grips with the combat, Mercs, and levels. Splash Damage was just about to drop the MERCSERV update which tweaked progression so it felt like a good time to give it another go. 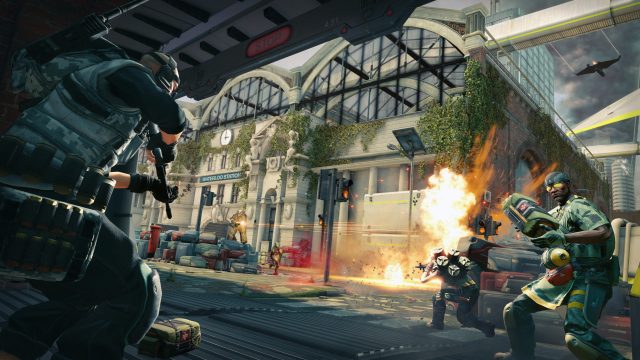 The first couple of games were a disaster, I could only vaguely remember some of the levels and I certainly couldn’t remember where most of the strategically important spots were on the map. There were new levels too that I had not even played like Castle which is a recreation of the Tower of London. I was running around like a headless chicken for the first couple of days dying a lot and not killing much in the process.

I needed to rethink my approach to the game. How could I prove useful in a match? As I’ve said, my aim is not as brilliant as it was (not that I was ever an ace sharp-shooter back in the day), the obvious choice was to take on a more supportive role. I had never played as support previously in Dirty Bomb but it was worth a shot. It was the right decision because hanging back a little and helping players get back on their feet as Merc Aura. It was also a great way to get to the grips with the maps again. Let other players lead the way and try and keep them alive. I was also pleasantly surprised at how enjoyable she was to play. With some loadout tweaking and crafting, I managed to get her off the standard shotgun onto something with a little more range. With Aura’s ability to drop health stations, it was also one way to keep myself alive for more than ten seconds while I stumbled around trying to revive teammates.

In Dirty Bomb, you take three Mercs into battle, and now I’d got to grips with Aura, I needed to finds a second and third. As a Founder, I have a few to choose from and having always been a fan of deploying weapons in the field Bushwhacker beckoned me as my second pick. I love Bushwhacker with his faster repair and disarming but his deployable turret has always felt a little weak. That’s still the case, it can be taken out so easily it almost feels pointless deploying it. The trick is to keep it hidden but that’s easier said than done on maps that are quite tight. Still, I am sticking with him for now.

The third pick is something I am still not decided on. A toss up between Skyhammer with his air bombardments or, well I am still not sure. Having only managed to catch one hero rotation since I started playing again there are some I have yet to experiment with. Despite that, the two picks I am using have proved pretty solid. 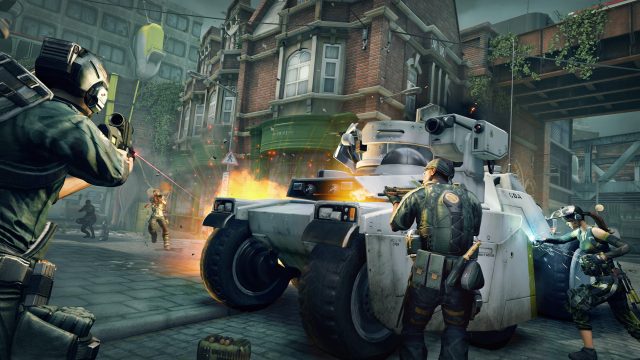 If there was one thing I have to be critical of it’s all the loudout cards and fragment crafting stuff. For anyone coming to the game for the first time, it’s still a little confusing. I never really played around with it too much before and being away for so long it’s a matter of learning what does what and on what screen. It could be better but that’s the joy of free to play games, there are almost always confusing systems in play to encourage you to drop a little bit of cash on the game. Oh one last thing, the melee weapons are definitely overpowered. I  can pump a load of bullets into someone and then watch them run up to me with a cricket bat and take me out with one swipe. Not cool.

The main reason I went back to Dirty Bomb is the objective focused gameplay which is unsurprisingly similar to Quake Wars. Plant an explosive, escort the EV, take something from A to B. It’s the multiple objectives on any one map that appeals which means it’s unlikely any match will ever be the same.

I will admit that this week’s play has not been without problems though. There have been hackers in games. One guy was using a hack where he could kill anyone on our team instantly as soon as we spawned. There have also been some suspicious aiming activities going on. I have only encountered this twice but it did screw-up a few games. The best option was to just leave the match.

There has been a lot of changes to the game since I last logged in and it was pleasant surprise to see how it had come along since Splash Damage took back control. It’s a cracking shooter that really doesn’t get enough attention. At least now I have found my next go-to game outside of work gaming.

P.S If anyone from Splash Damage reads this, you still owe me a Founders pack which I never got!

Dirty Bomb is free to play and can be picked up on Steam.

Just Cause 4 leaked by Steam

Dead or Alive 6 heading to PC next year