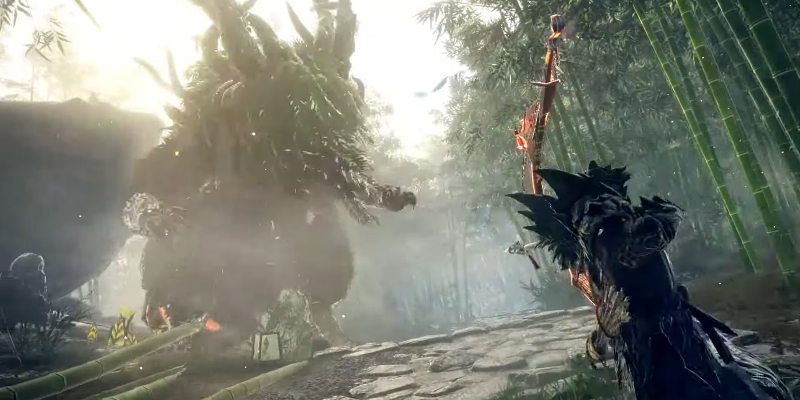 EA has revealed Wild Hearts, an upcoming hunting action game in the same vein as Monster Hunter. Developed by Omega Force as part of the EA Originals program, Wild Hearts will release on February 17, 2023. It will be available for PC on the Epic Games Store, Origin, and Steam.

The reveal was made via a new trailer posted on Wild Hearts‘ official YouTube channel. The trailer shows off some of Wild Hearts‘ gameplay as well as its setting, Azuma. Azuma is a fantasy nation that’s  inspired by feudal Japan.

Much like Monster Hunter, the gameplay of Wild Hearts revolves around slaying large creatures. Either by yourself or with a team via co-op, you’ll have to hunt down vicious beasts. Once defeated, monsters drop various materials that can be used to craft better gear. Crafting is an important aspect of Wild Hearts and is central to its progression.

When Wild Hearts‘ release date arrives, players will be able to slay monsters will all kinds of weaponry. Similar to Monster Hunter, you’re armed with a weapon of choice, but that’s not all. Players can also construct wooden structures to climb for mobility or convert them into dangerous weapons. In the trailer, we see these structures turn into explosive mines and a deadly harpoon.

Wild Hearts clearly has a lot in common with Monster Hunter, but they aren’t identical by any means. For one, Wild Hearts utilizes a distinct art style that looks more colorful and fun than its Capcom counterpart. Furthermore, the combat in Wild Hearts appears to be faster-paced and more action-centric.

Its faster pacing isn’t too surprising, as developer Omega Force has previously worked on Dynasty Warriors, a franchise known for its over the top fast-paced action. Wild Hearts seems to continue down that path and builds on what made Dynasty Warriors so popular in the first place.

Skull and Bones gets delayed out of November to March 2023