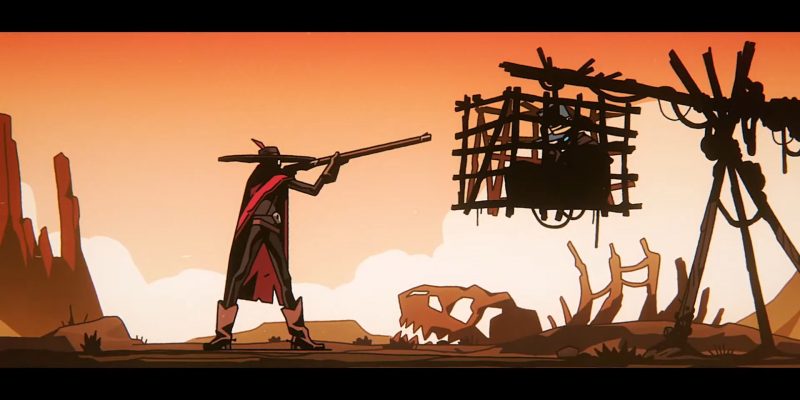 Devolver Digital announced a new game during its showcase today. The game featuring wizards with guns, aptly titled Wizard With a Gun, is a sandbox game with weapons and spells galore, and we got to see it for the first time in a new trailer.

A new trailer revealed by Devolver opens with a stylish, animated brawl between some of the wizards and creatures in the game. The mash-up between wizardry and the classic American western precedes some of the gameplay we can expect to see. Players can catch a glimpse of some of the game’s combat, material gathering, and crafting mechanics in the trailer. Developer Galvanic Games previously released Some Distant Memory and Gurgamoth, so there may be some familiarity there.

Wizard With a Gun takes place in the magical wild, with creatures and mysterious secrets abound. Up to four players can embark on a journey together, crafting weapons, bullets, and furnishings for your home. It appears you can’t just craft everything on a whim, as too much magic may “burn it all down.”

Guns are indeed an important feature in this game. The trailer shows that in Wizard With a Gun weapons are utilized for just about everything. This includes farming, fighting monsters, and even placing down furnishings. I don’t exactly know why these wizards need guns over a magic wand, but one thing’s for sure: the customization for these weapons is important.

Sandbox and survival games remain a tidal force in the gaming space, with games like Valheim and Stardew Valley gaining popularity. Indie games, too, have surged, with games like Hades receiving top accolades for Game of the Year. With this game combining the mechanics of a sandbox game, as well as the charm from an indie game not unlike Supergiant’s best, Wizard seems poised for success.

Wizard With a Gun is set to release in 2022, and you can check out more on its Steam page.