Telltale announced a triplicate of titles today, including a new Batman and a final season of The Walking Dead. Last, but absolutely not least, was confirmation of a return to the shadowy streets of Fabletown in a second season of The Wolf Among Us. This is excellent news for those of us who enjoyed the first set of episodes.

In fact, The Wolf Among Us is probably the last Telltale series I could wholeheartedly recommend to others (note: I didn’t play Tales From The Borderlands, but have heard good things). I think it struggled to carry through its early promise, and it suffered from multiple delays to episodes (reportedly due to necessary re-writes, which in themselves may have had negative consequences), but it’s right up there with Grim Fandango in terms of defining videogame noir.

The Wolf Among Us represented a time when I thought I could see how Telltale’s approach to adventure games was evolving with their audience. Esoteric object combinations had been out for a while; the studio’s first Walking Dead title in 2012 barely bothered with it, and the more traditional Sam & Max days had ended back in 2010. Phasing out the puzzles has done little to hurt Telltale’s popularity, so it’s probably safe to accept that only a minority of their players would want to see them return. That’s fine. Things change.

But The Wolf Among Us offered a few glimpses of what Telltale interactivity without traditional adventure game puzzles could look like. One scene from the first episode (‘Faith’) sticks with me in particular. It’s the part where Bigby can (optionally) go to investigate the Woodsman’s apartments after getting a call from Toad.

Protagonists of film noir (or noir fiction in general) rarely find themselves solving cases by using large numbers of objects on various hotspots. They do, however, pursue lines of inquiry, interrogate witnesses, and apply their observations the prior pieces of evidence about the case. In that first episode scene with Toad, that’s exactly what the player gets to do. It’s pretty straightforward, and I don’t recall if you can even ‘fail’ that section, but Bigby’s observations and cross-references with Toad’s obvious lies are a pretty good sketch for a deeper investigative game. 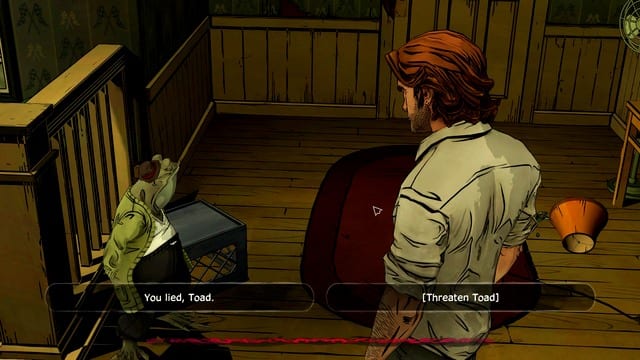 Toad, you’re a liar, and I can prove it.

There’s no doubt that The Wolf Among Us squarely covers the other quintessential aspect of noir: the troubled and often reluctant detective with a messy personal life. Bigby has an unpleasant past, a tense relationship with Snow White, and has to struggle to keep his demons in check in a literal, and physical, sense. The first season also managed to incorporate another staple of noir; fist-fights. Once again, the very first episode shines with the bone-shattering brawl against Gren.

As the episodes progressed, though, the more in-depth investigative sequences almost entirely disappeared. In the final episode fight against Bloody Mary, you didn’t even need to respond to the quick-time prompts in the majority of cases.

Calls for Telltale to return to their adventure game puzzle days are almost certainly futile (and besides, plenty of other developers are filling that niche). But the early episodes of The Wolf Among Us showed signs that the studio was capable of adapting a different kind of interactivity – the investigative action of noir fiction – to a videogame format. Those sequences elevated the episodes in which they appeared, and their loss was felt as the season progressed.

That’s the kind of interactivity I’d love to see return in expanded form for The Wolf Among Us Season Two. Telltale have already shown they can provide exquisite atmosphere; my great hope is for them to give us more opportunities to use procedural, observational, and conversational tools to investigate the crimes of Fabletown.

By Kevin Carignan6 hours ago
Features

By Jamie Sharp4 days ago
Features