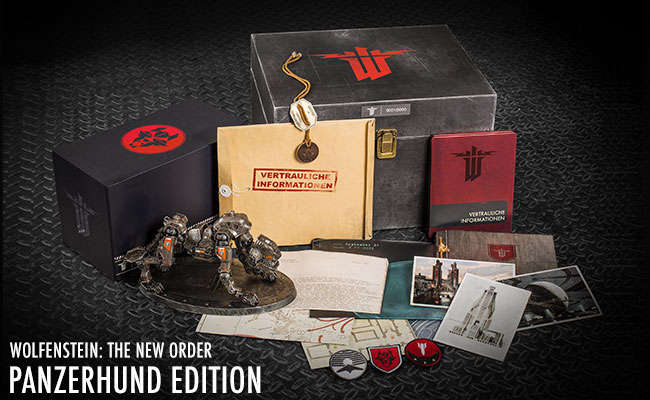 Bethesda has announced a very limited “Panzerhund Edition” to their upcoming Wolfenstein: The New Order. The very limited collectors pack will include an 8-inch hand-painted Panzerhund statue and base, as well as a “classified folder” containing documents like maps, case files, letters, and an X-ray for protagonist B.J. Blazkowicz.

The bundle also packs in a set of 14 full-color postcards stemming from The New Order’s alternate 1960s, as well as three embroidered patches and a replica dog tag. Lastly, the premium bundle includes an “exclusive” steelbook for the game. The “Panzerhund Edition” will sell for $100 at select retailers.

One thing you will notice missing from the Collectors Edition is . . . The Game. Yes, that means that you have to purchase the game separately. This edition will release along side the game on May 20th for Xbox 360, Xbox One, PlayStation 3, PlayStation 4, and PC.

“Keep your preorder at your favorite retailer and we’ll send you these goodies separately,” Bethesda said. “This way we can ship these boxes worldwide and you’re not stuck waiting for your game to come along with an oversized, expensively shipped box.”

Facebook Has Big Plans For Oculus Rift – But Not Facebooculus

3D Realms Fires Back On Gearbox Lawsuit: They Still Own Duke Nukem