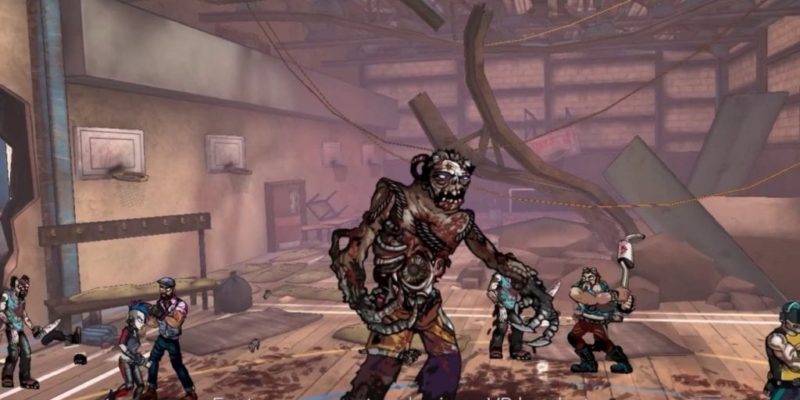 The first game I ever owned on the Super Nintendo Entertainment System was Battletoads/Double Dragon. The side-scrolling beat’em up was a mashup of the Battletoads and Double Dragon franchises, providing tons of challenges and enemies from both realms.

Throughout the years, I’ve played games like Double Dragon: Neon, Final Fight, and most of the Ninja Turtle scrolling games. One thing that all of these titles share in common is the 2D foundation on which they are built. The most 3D-like aspect that I can think of to come out of these games has been in something like Ninja Turtles: Turtles in Time, where you can helicopter spin and launch members of the Foot Clan at the screen. It was really cool to see something like that sort bend the landscape of games of its kind. But, can 2D and 3D environments really co-exist in the same game? What about at the same time?

“Team up. Bash brains. Save London.”

Bloody Zombies is currently in development by Paw Print Games Ltd. The company is taking a rather different approach when it comes to the 2D brawler, side-scrolling genre. First and foremost, your squad of up to four players are out to run the streets of London, pummeling the guts out of zombies who have infested the streets. But, the biggest change and deviation from traditional games of its kind comes in the form of VR. Whenever VR players are present, the game adds another layer of depth as those players can now explore and see more areas of the map. It offers an almost isometric camera angle to the level, allowing for additional secret areas to be discovered or power-ups to be nabbed. You might think this a little gimmicky at first, but after playing the game during E3 2017, I was utterly surprised at how well it plays out.

Using special moves along with combo’d hits will cause zombies to explode with gore.

Whenever VR players are present, the game adds another layer of depth as those players can now explore and see more areas of the map. It offers an almost isometric camera angle to the level, allowing for additional secret areas to be discovered or power-ups to be nabbed. You might think this a little gimmicky at first, but after playing the game during E3 2017, I was utterly surprised at how well it plays out.

Honestly, I was skeptical at how well the two realms could work together in a seamless game. The team at Paw Print Games has created a true 2D VR experience with finesse and style. There was something satisfying when placing the Vive headset on and veering not only left and right on the streets but looking around the entire locale. When peering above the action at the top of your screen you can see things like hovering, spinning blades that are moments away from raining down on your squadmates. You might also spot loot boxes in the distance that can only be opened by jumping box ledges that only you can see from your VR point of view. These viewpoints are additional to the now floating camera angle that you have of the streets as you still bash enemies and aim for hit combos.

The best way in which I could describe the combat is a mix of all 2D brawlers. You can execute traditional moves to the genre, like a small sprinting jump kick, juggles or even simple button mashes to string combos. But, there are also moves, like pressing Left, Right and then the Y-button, to do special moves at the cost of your special meter bar. When you bring these moves together with combos, enemies will explode, creating a small fountain of gore. These moves can be learned and swapped as the game continues. Instead of each of the four selectable characters having only a specific set of skills and moves, each character can have access to the full pamphlet of maneuvers.

Bloody Zombies transforms the classic co-op brawler into an original experience.  Players team up to battle the undead in the streets of London, regardless of whether if they are playing in VR with its unique viewpoint or on console or PC,” said David Corless, VP of Publishing, nDreams.

The moves really are an important factor when you compare it to the difficulty and events within those levels. Each level is split into two sections, with traditional boss battles at the end. Level events include things like evading a giant set of blades (mentioned earlier) and breaking through cement barriers in order to escape certain death. Once the game is beaten, a new difficulty level opens up. Each time a playthrough is completed, enemies will spawn differently than the time before, offering almost limitless playthroughs based on enemy variations and character move combinations.

You can time your attacks or jump in for non-stop attacks. You can also evade the heavy attacks dealt by some bosses.

I still can’t get over the depth that Bloody Zombies has managed to provide with simply adding a VR aspect to a 2D, side-scrolling beat’em up. Traditional levels open up to anyone that is wearing a VR headset, assisting the rest of your crew that is battling it out on screen. More than one person can be in your squad with a VR headset, which is shown by your character sporting it on screen.

Bloody Zombies is slated for release in 2017 on the PC via Steam, PlayStation 4 and Xbox One. PlayStation 4 users can play via PS VR, and PC supports the HTC Vive and Oculus Rift.