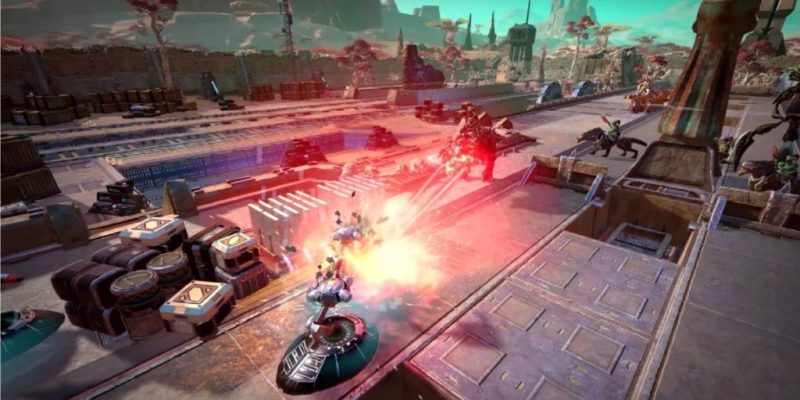 War. War never changes. Well, unless we’re talking Age of Wonders: Planetfall. There are a number of mechanics in play that provides strategic and tactical depth worthy of any 4X game. In this guide, we’ll take a look at diplomacy, tactical combat, elemental attacks, operations, doctrines, and covert actions.

Note: We also have our official review and technical review, which cover some of the features and mechanics in Age of Wonders: Planetfall. 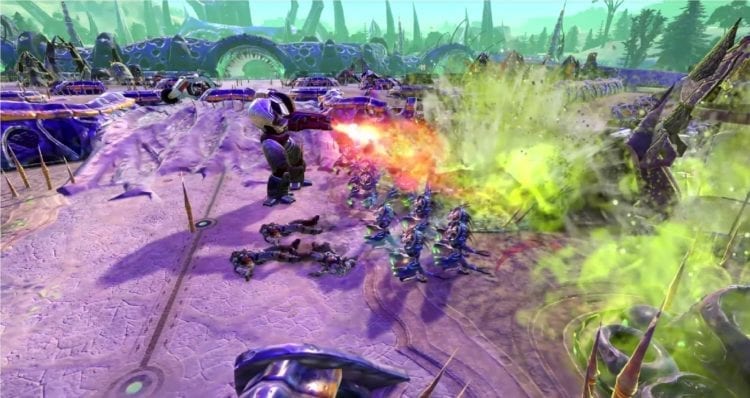 Age of Wonders: Planetfall – Combat, the basics of elemental attacks

We’ve mentioned this before in our research/tech guide and our commander customization guide. But, yes, Age of Wonders: Planetfall will have you worrying about the types of elemental attacks that your faction/leader focuses on.

The types of elements are Kinetic, Thermal, Arc, Biochemical, and Psionic. Each faction/race, unit, weapon, mod, operation/”spell,” secret tech — practically every offensive or defensive maneuver — will be governed by these elements.

Knowing the types of elements being used is critical in Age of Wonders: Planetfall since some tactics and techs can nullify or boost their effects. Oh, and even one race, the Assembly, is highly resistant to Arc damage.

Note: Most attacks in the Firearms category will generally do kinetic damage. Laser and Explosives weapons groups do thermal damage. Ideally, you’ll want to look at the unit, weapon, or mod description to see the type of damage it does.

Take a look at this Vanguard trooper below and notice how the unit’s weaponry uses kinetic damage: 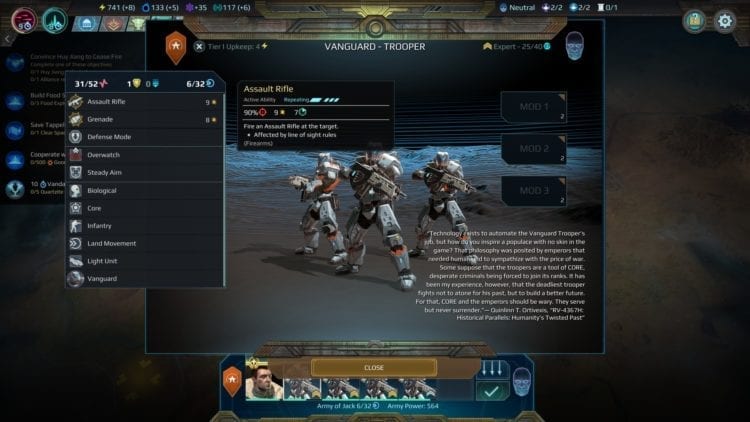 Whenever you move your army to a space occupied by a neutral or hostile force (ie. Marauder faction), you can engage them in combat. In Age of Wonders: Planetfall, you can have up to 42 units in a battle especially if you fully surround an army or colony on the world map before engaging.

It’s possible to auto-resolve most battles if you want to, but do take note of the risks. Each match-up will tell you if it’s a “safe battle,” “low-risk,” or “high-risk.” Insurmountable odds will even show up as an “impossible battle.”

If you do plan on fighting a battle manually, the scene changes to an X-COM-like experience. It’s turn-based tactical for your enjoyment!

Defending armies get to go first and you’ll move your units hex by hex. You can also go into cover, and there are even perks that improve your accuracy or range if you’re in cover. Most attacks will do the default damage as-is unless it’s buffed or defensive measures are in place. Another factor to consider is “grazing” where you only partially hit a target, doing half the damage.

Most units have a default attack and a special attack and making any offensive move will end their turn. Likewise, certain units (such as those in the Vanguard or those using the Firearms weapons group) can activate “overwatch” mode. 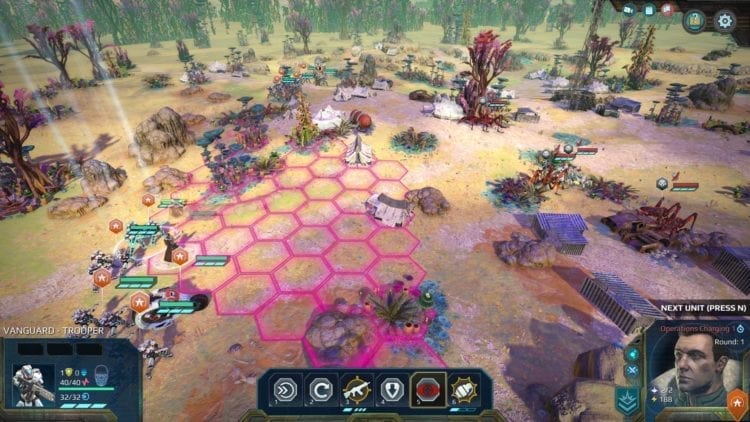 An Age of Wonders: A time of peace

Combat is almost always unavoidable in Age of Wonders: Planetfall. Think of it like Civilization except you’ll be at war 90 percent of the time. With multiple roaming armies and creatures of the wild, you’ll be hard-pressed for allies. That’s when minor factions controlled by the AI come into play, and your knack for diplomacy.

Each game you start in Age of Wonders: Planetfall will have various sentient alien races who are neutral. They’re usually found next to your first colony. If you don’t want to fight them, you can safely do quests. These provide you with objectives but, more often than not, it’s as simple as finding an enemy army to trounce or giving them some resources.

As you complete quests from these AI minor factions, your relationship with them increases. This is when you can start using Influence. Remember our basics guide? You gain incremental amounts of Influence each turn to help with diplomacy. You can use Influence to:

The major factions from the six playable races also have their own diplomatic options but they’re fairly barebones. You can denounce, go to war, become pals, exchange information, vassalize/become overlord, or trade resources.

Note: You can check your diplomacy options and relationships via the Contacts menu on the top left of the screen. 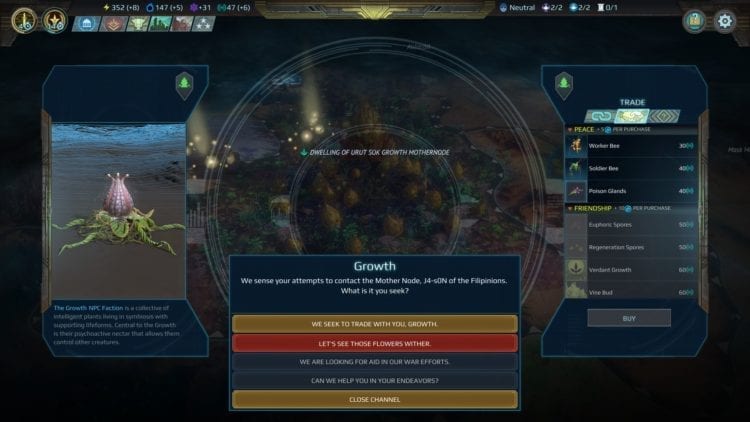 Last but not least, you’ve got the final ingredient in your Age of Wonders: Planetfall playthrough — these are your Operations. They come in three flavors:

You can consider Operations as the espionage mechanic in Age of Wonders: Planetfall. This is due to the sneaky nature of each action — you’ll never know what your opponent has up its sleeve. Tactical Operations can turn the tide of battle. Meanwhile, Strategic Operations if successful (based on your covert offense) can impair your opponent on the world map. Even if you’re not engaged in combat, you can slowly grind your enemy down. 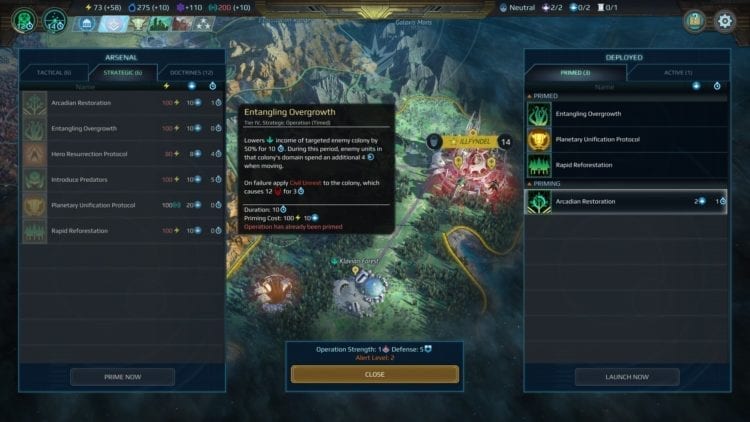 That does it for our Age of Wonders: Planetfall diplomacy, combat, and operations guide. Be sure to head over to our guides and features hub for more information. You can grab the game via its Steam store page.