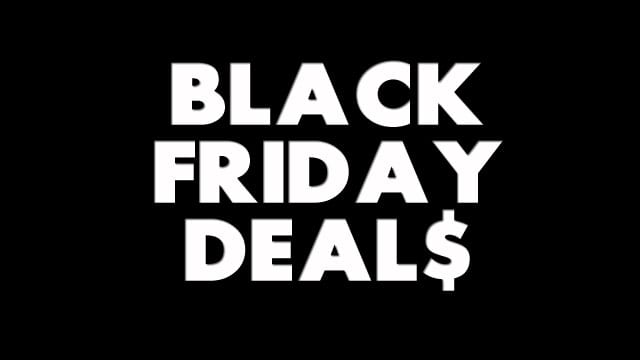 Once upon a time Black Friday was only enjoyed by our US cousins but now it’s a “thing” everywhere. Whether you celebrate Thanksgiving or not, there’s no getting away from Black Friday. It’s here to stay and you may as well embrace the shopping frenzy and try and take advantage of some of the deals.

We’ve been having a trawl through some of the offers which may save you a few pennies. It’s a minefield and you are going to have to compare prices at the different retailers to find the best deal but it could save you cash, especially if you’re looking to buy something like a complete new system. Prices can change over the next few days, especially on sites such as Amazon so be careful and take notes before parting with your cash.

While we could point you in the direction of specific items, prices are changing, and new deals are appearing all the time so these links below are a good place to start when hunting for a bargain.

Nothing more to add here really. If you want cheaper games then the Autumn Steam sale is the place to be for a PC gamer. Thankfuly there’s no flash sales so it makes finding bargains a little less stressful.The sale is on now until 1 December. Make the most of it.

GOG’s sale will include The Witcher 3, it always does, but there are other great deals to be had on some classic titles.

EA’s Origin sale is now on, and although it offers discounts, they are not always that great so choose wisely.

With the Elite Dangerous: Horizons expansion coming soon, now would be a great time pick up a discounted copy of Elite: Dangerous. It can be grabbed for £9.99 until 1 December.

Heroes of the storm has a 50% real money discount until 8 December. World of Warcraft games have been heavily discounted for the original game and Warlords of Draenor.

The MechWarrior Online Black Friday Sale runs from Wednesday November 25th until Tuesday December 1st. All MC purchases come with an additional 20% Bonus amount of MC, and all Hero and Champion ‘Mechs are 50% off. Double XP Conversion is also in effect.

Indie Game Stand will highlighting over 200 indie games on sale for “Cyber Weekend“. Starting on November 27th and ending on December 3rd at 11:59 EST

There are a few deals up on Greenman but not nearly as good as what can be found on Steam. For example Dark Souls 2 is £5 more on GGG compared to Steam in the sale. Make sure you compare prices before taking the plunge.

The digital retailer has joined the sale action with lots of Thanksgiving discounts but again you may want to check the equivalent titles on Steam to compare prices.

Amazon’s game offering are not fantastic today but you can pick up a copy of Outlast for $4.99. Amazon’s listing do change so keep checking this link on a daily basis for new additions.

Game’s Black Friday deals are now underway, you’ll just have to sift through the console stuff to hunt down PC bargains. We couldn’t find much here today (26 Nov).

Save 25% on almost every Hero and Costume and receive a free random Hero or Costume. Also, from 9:00 AM PT until 11:00 AM PT ONLY: all heroes in black and all black costumes are 50%off. Check the details here.

Unsurprisingly there’s a ship and merchandise sale for Star Citizen. All ships will be available at once from Friday, November 27th to Sunday, November 29th.

If you fancy some podcasting then the Blue Yeti microphone is now on sale at Amazon US for $84.00 and Amazon UK has the Blue Snowball for £32.99 in the UK

Overclockers UK will have Black Friday deals running from 9AM Thursday morning if your’re looking for hardware of even a new system.

Newegg UK are joining the sale action with deals on RAM, monitors,  a stack of graphics cards covering just about all price bands and power. There’s even a ASUS ROG PG278Q Black 27″ Gaming Monitor for £365.99 saving you £232.00!

The Newegg US site also comes with a load of deals on RAM, monitors CPUS and more.

We’ve been sifting through the Cyberpower US deals and there’s discounts to be had on a variety of component upgrades on systems. Cyberpower in the UK also have autumn deals on with free games and system discounts.

iBuyPower has deals up now for Black Friday with discounts on systems saving anything up to $500 USD on high-end systems.

The sale is not live yet and we don’t hold out much hope of finding many bargains here but it might be worth a little look for PC hardware and gaming bits and pieces.

Like John Lewis, Argos is counting down the hours until the sale goes live and again you may just pick up a hardware or peripheral bargain.

We’ll update the page if anything mircaculous appears but these links should point you in the right direction depending on what you’re looking for. At least you won’t have to get crushed by shoppers when stores open on Friday.

If you spot a great deal then share it with the community in the comments below. Site viewers will appreciate any pointers.