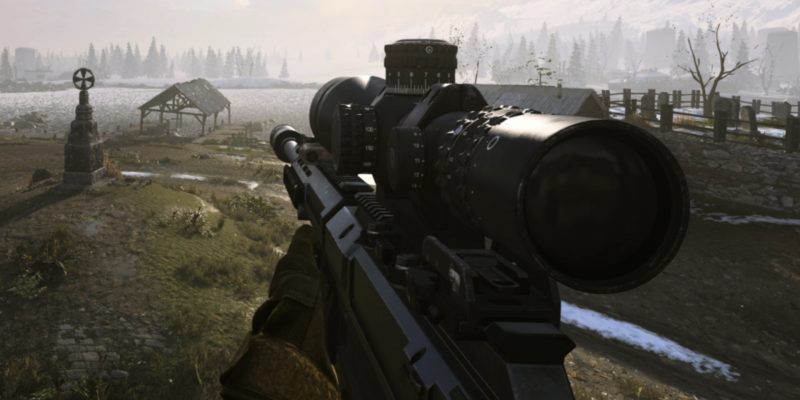 Throughout the history of Call of Duty: Warzone, many sniper rifles have come and gone. Currently, the Kar98k is the best overall sniper rifle, but it isn’t for everyone. Its low-scope magnification can make landing shots at extreme ranges difficult for some players. That’s why, for many players, this AX-50 Warzone build has become an attractive option.

The AX-50 has the highest scope magnification of any sniper rifle in Warzone. It’s fantastic for landing headshots beyond 200 meters, which is often necessary in such a large-scale battle royale. While its competitors demand small adjustments to your aim, the AX-50 is generally more forgiving. This makes it a great choice for those looking to get into sniping in Warzone.

To reiterate, this is not the optimal sniper for high-skill players. Both the Kar98k and SP-R 208 outperform the AX-50 due to their superior bullet velocity and aim down sights speed. However, this AX-50 Warzone build is still viable and easier to use than its meta competitors. Just don’t be overly aggressive with this build, as its handling characteristics leave a lot to be desired.

As with any decent sniper, it’s best to maximize bullet velocity where possible. For this reason, both the Monolithic Suppressor and 32.0-inch Factory Barrel are great attachments to use. The Monolithic Suppressor comes with the added bonus of making this AX-50 build far quieter. Without a suppressor, it is possible to be heard from hundreds of meters away. This distance is shortened greatly with a suppressor equipped, decreasing the likelihood of third parties joining in on the action. 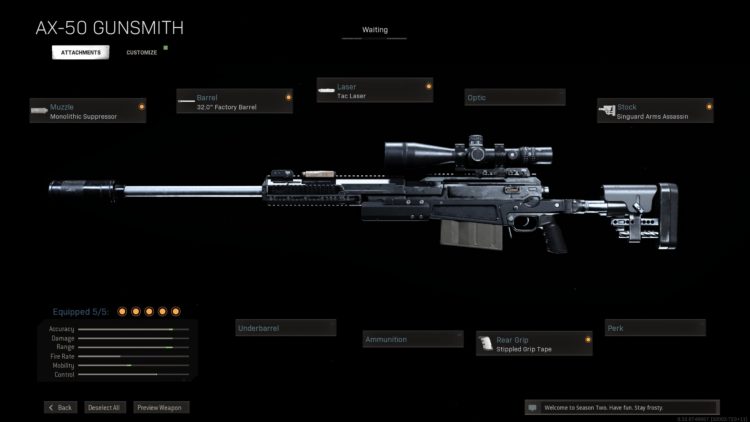 The 32.0-inch Factory Barrel is primarily needed for the sizable boost to bullet velocity it provides. However, it also slightly reduces vertical kick between shots. As the AX-50 is a bolt-action sniper, the vertical kick isn’t a big deal, but the barrel can be useful for when you’re lining up subsequent shots.

Both of these attachments slow down our Warzone AX-50 build considerably. To mitigate this, the remaining three attachment slots are all used to improve weapon handling. The best attachment to do so is the Tac Laser, which greatly increases our aim down sights speed. Unfortunately, the Tac Laser is visible to enemies while you’re aiming, and that can give your position away. Be wary of this when using the AX-50 to scout nearby areas. 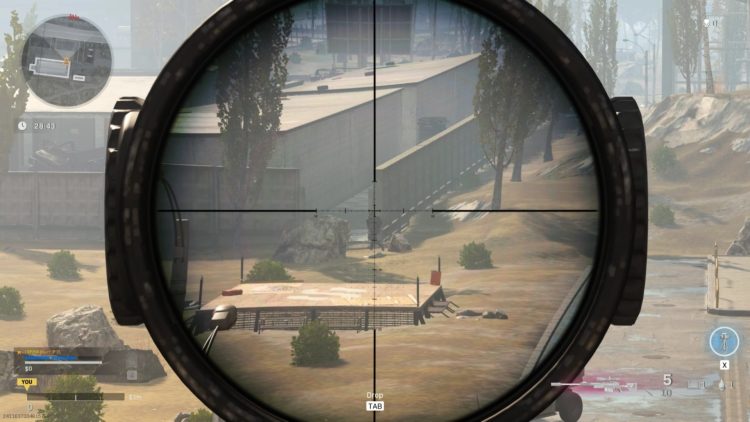 For the remaining two attachment slots, it’s best to use the Singuard Arms Assassin stock and Stippled Grip Tape. Although the Grip Tape does marginally improve our sprint-to-fire speed, it’s the increased aim down sights speed that’s most desirable. The only downside to running these attachments is a penalty to our aiming stability but this is offset by the Tac Laser.

This AX-50 Warzone build is fairly standard, but there are a couple of potential tweaks that can be made. Some players opt to swap out the Stippled Grip Tape for the 9 Round Mags. The larger magazine reduces the likelihood of having to reload in the middle of a team fight. Alternatively, the Sleight of Hand perk reduces reload time, which slightly increases this build’s theoretical shots per minute.

Eximius: Seize the Frontline review — A game of two halves