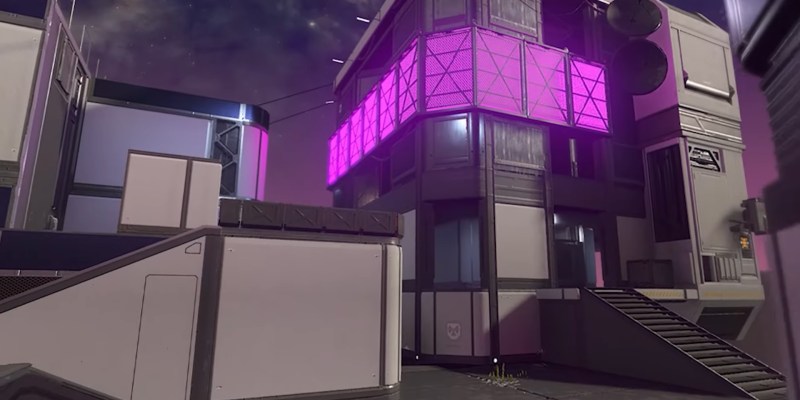 There’s some good news for those who were around for the heyday of Halo 3 multiplayer. One of the most popular maps in Halo‘s history is making its comeback. The Pit is returning in Halo Infinite, but not in a way that you might expect. The map is being remade using the game’s Forge mode, which will allow players to create their own maps and game modes. As such, the map looks a bit different from how you may remember it.

The trailer showing off The Pit for Halo Infinite is mostly a highlight reel of classic matches from Halo 3. But in the last 10 seconds, there are a few comparisons between the old and new versions of the map. And let’s just say that it looks pretty different. The grungy aesthetic of the original version of The Pit has been swapped for a much cleaner-looking arena, but the one thing most people will notice straight away is the bright purple neon lighting.

Michael Schorr, Forge lead designer at 343 Industries spoke about The Pit’s return at HCS Orlando. Schorr pointed out that the map has been rescaled to “accommodate the new Infinite movement.” He also made sure to mention that the map now takes place on top of a skyscraper, which explains the drastically different style. So, it’s definitely different from The Pit’s original appearance, but it looks like the broader elements are still present in Halo Infinite. Some Halo pros including Walshy and Snipedown took the map for a spin at the event, and it still seems fun.

Prepare to duke it out in The Pit

Now, this is where things get a bit confusing. The release date for The Pit in Halo Infinite is a bit unclear at the moment. Forge is planned to come to the game on November 8, but The Pit is due sometime after that, with no word on when that will be. As of now, the map is still a work in progress. It’s fair to say that Halo Infinite players are frustrated with the wait for the game’s post-release content. After all, the game’s only getting one map in the next couple of months. And with Season 3 due for March 2023, it’ll be a long wait for something substantial.

Forge should hopefully inject some more excitement into Halo Infinite, though. Plus, The Pit’s inclusion in Halo Infinite is something cool to look forward to. From this point on, the future for Halo Infinite should be bright.

Capcom’s Onimusha is getting an anime series on Netflix, and here’s what it looks like