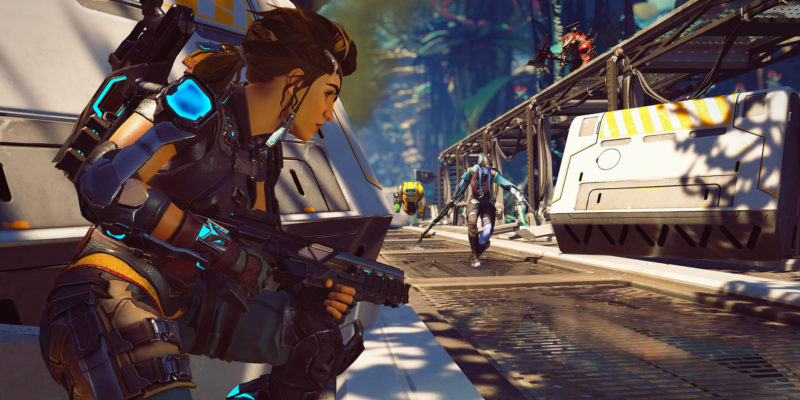 The hero shooter sub-genre has seen plenty of meaningful additions over the last half a decade or so. Inspired by Team Fortress 2, the likes of Overwatch, Apex Legends, and Paladins have all brought their unique offerings to the table. At this point, the genre is over-saturated so any newcomers have to differentiate themselves to succeed — a goal that Amazon’s new free-to-play game Crucible has tried too hard to achieve, much to its detriment.

Crucible tries to stand out from the crowd by being a sort of MOBA / hero shooter hybrid. It has the character design and cooldown system often seen among the hit hero shooters. However, the time to kill, objective design, and overall pacing is far more reminiscent of a traditional MOBA.

In concept, this could work, but the execution just isn’t quite there. It ends up failing to effectively fit into either genre, with the most notable issue being the complete lack of teamwork-focused mechanics. 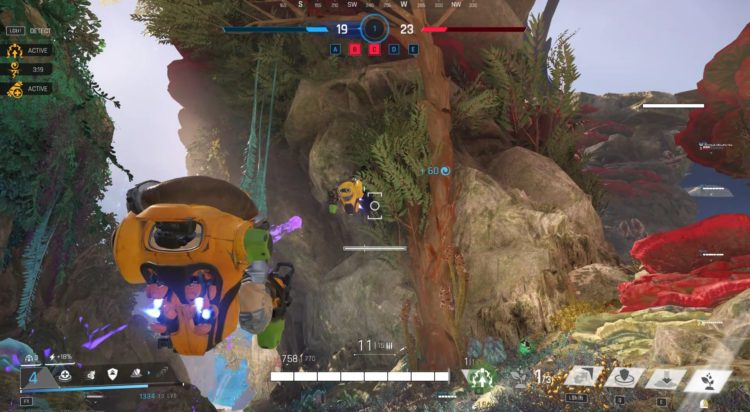 Both MOBAs and hero shooters alike integrate team-based combat at their core. This usually gives those games great competitive potential, helping them last into the distant future as players look to constantly improve their gameplay. In contrast, the most teamwork needed in Crucible is shooting the same target to kill them a little faster.

The biggest reason for this is Crucible ditches the age-old tank, damage, and support design. Instead, all 10 playable hunters can fit into just about any role you need them to. Self-healing is in abundance, health pools are generous, and just about every hunter has some form of damage mitigation. Unfortunately, when you don’t need to cover for other characters’ weaknesses, the need for meaningful teamwork dissipates.

The modes on offer

To its credit, Crucible has launched with a decent amount of content. The three core game modes all offer a decent degree of variety. Heart of the Hives pitches two teams of four against each other in a duel to capture three objectives. It’s unfortunate that, due to Crucible‘s lack of team-based mechanics, each team fight effectively plays out like a generic deathmatch. Whoever’s team is more mechanically skilled usually ends up winning the game. There’s no ultimate economy or even team strategy that I’d expect in a hero shooter.

If you fancy something faster-paced, Harvest Command is a joint domination-deathmatch game mode comparable to Battlefield‘s Conquest. Of course, there are no vehicles and the map is far smaller, but the idea of capturing points and getting kills to win remains much the same. I found this to be a great option for improving mechanics since duels are so frequent, but it’s likely too chaotic to function at any competitive level. 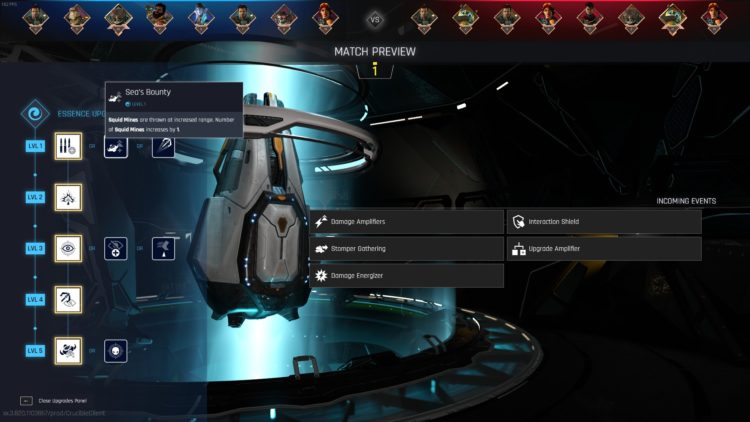 Finally, Alpha Hunters is probably the strangest game mode choice since it doesn’t really play into Crucible‘s strengths. Simply, Alpha Hunters is a battle royale mode that features eight teams of two. Alongside fighting to be the last team alive, you’ll be leveling up your hunter by killing trash mobs for experience. This is functionally very similar to how character leveling works in the likes of League of Legends. Although here you simply improve abilities rather than unlock them throughout the game.

This leveling mechanic works well as it provides a clear gameplay flow to the slower-paced modes. You farm mobs and stack up healing supplies in-between team fights. Once you’ve upgraded abilities and have enough resources, you go into the team fight and fight for the objective. It’s slow, but I was surprised how well this can work, even if it doesn’t necessarily fit in what is supposed to be a hero shooter.

If Amazon Games wants to spin Crucible as a team-based hero shooter, it should probably introduce some communication options. I honestly assumed I was doing something wrong when the usual spam of T, enter, and Y didn’t bring up a text chat. It was also very noticeable that throughout my time playing Crucible I never heard a single voice in-game.

But no, this isn’t me going crazy. Crucible has launched without the majority of basic communication features you would expect in any team-based game. Even worse, the only system in place is a limited ping tool that doesn’t offer many options. 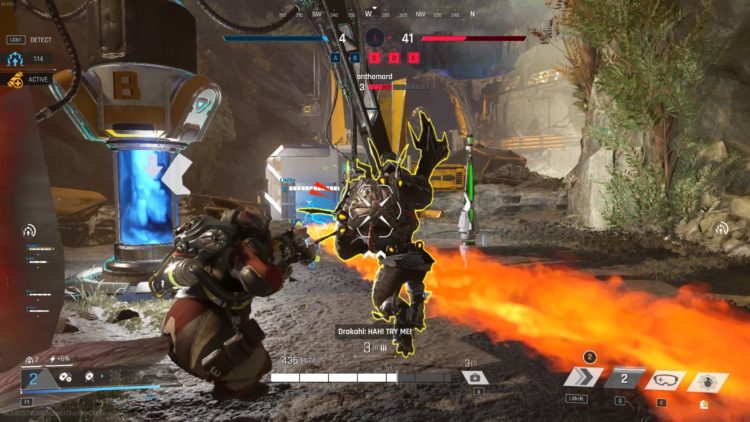 Beyond that, there is no mini-map or scoreboard, melee feedback is lackluster, and, perhaps worst of all, the reticle often lies to you. I’ve tested this intently and I’m sure that half of your shots won’t even go where you aim. This is most noticeable on precision hunters like Shakirri and Ajonah.

Thankfully, all of that is fixable. With time and effort, developer Relentless Studios should be able to amend these issues and at least make Crucible a well-made hero shooter, if nothing else. Although I think that amending its general gameplay flow issues and identity crisis will be far more difficult.

It’s clear that the art team behind Crucible put a lot of passion into the game. The characters and environments look fantastic, with the player models in particular being some of the best I’ve seen. Even when settings are dropped from high to low, the game still looks good. That’s not necessarily a feat many of its competitors can claim.

Unfortunately, this comes at a cost. At 1080p, high settings, SMAA 1tx anti-aliasing, I could only get Crucible to scrape an inconsistent 60 FPS. This would often dip into the 50s and, more worryingly, even as low as the mid-40s. 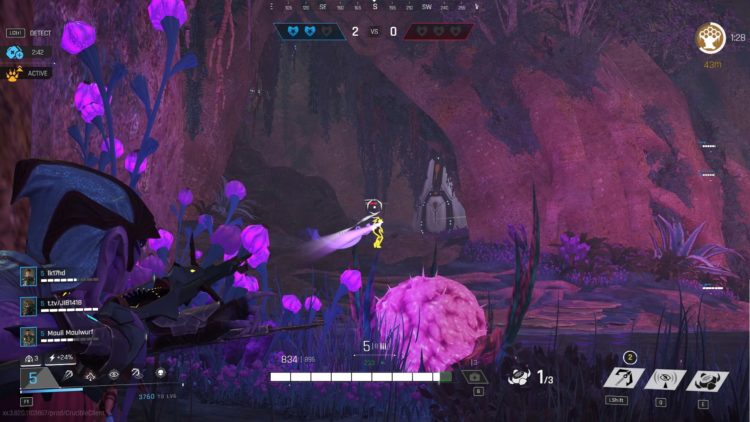 Dropping my settings to 1080p, low, FXAA anti-aliasing didn’t have the impact I expected. At first, my game ran at a far better 90 FPS, even spiking at high as 110. This didn’t last. After just a couple of team fights, even on low settings, I was struggling to maintain above 60 FPS. Strangely, my general performance was similar regardless of what settings I ran.

Call me a PC elitist, but I expect my RTX 2060 to manage more than an inconsistent 60 FPS at 1080p. It’s clear that Crucible is lacking optimization, and that’s a problem if it wants to become a serious competitive hero shooter in the future. Especially when you consider that my machine can comfortably reach above 120 FPS, high on Apex, and 160 FPS, high on Overwatch.

By my judgment, Crucible is not a great game. At least not right now. It has too many fundamental oversights and technical issues to justify playing it over the array of better alternatives in its genre. It tries so hard to be both a hero shooter and MOBA at once that it ends up failing to be either. The most unforgivable design choice is the developer’s failure to promote any form of meaningful teamplay.

Without defined roles, communication options, and more engaging objectives, I just don’t see how Crucible can sustain a player base long-term. Hero shooters are built on their team fights and competitive game modes. Without either of these being present, it’s difficult to see a world where people are still talking about Crucible in three years’ time. If Amazon and Relentless Studios can turn things around, they deserve full credit for doing so. Right now though, you’re better off playing just about any other hero shooter on the market.