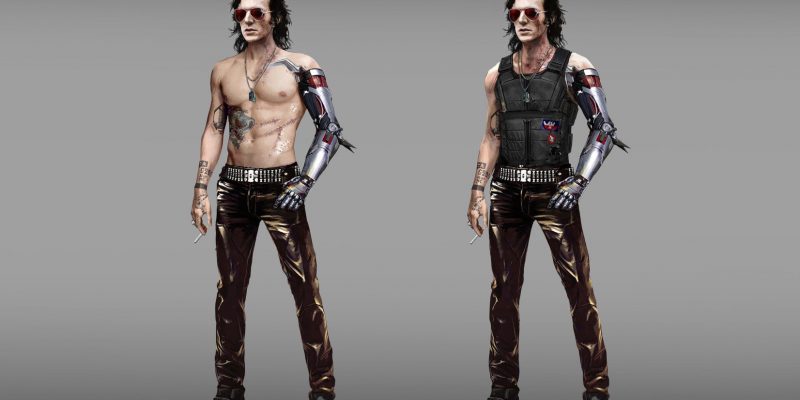 Cyberpunk 2077 likely caught your attention when Keanu Reeves walked on a stage and revealed he would be a character in the game. He plays the part of Johnny Silverhand, the rocker boy with a history of detonating nukes in city centers. The character doesn’t just sound like Reeves though; Silverhand bears the actor’s likeness. In trailers, the resemblance is uncanny, while in-game, it’s a bit of a toss-up. Thanks to new art from one of CD Projekt Red’s concept artists though, it’s clear that having Reeves portray Johnny Silverhand wasn’t always part of the plan.

This early art was shared by CD Projekt Red senior concept artist Lea Leonowicz via artstation. For the most part, Silverhand looks the same, at least from the neck down. He still sports a pair of tight leather pants, a studded belt, bulletproof vest, and dog tags. In many of these early sketches, Johnny is also taking a drag from a cigarette, a trait that holds up in the actual game.

Would the real Johnny Silverhand please stand up?

Silverhand’s namesake silver arm (with hand attached) is also there, although some sketches have it on the opposite arm. However, when you get to his face, things are radically different. There are multiple different interpretations of Silverhand here, some looking less world-wary while others are simply grizzly. They all have their consistencies though — Silverhand’s gun, his sunglasses, and Samurai gear all made it to the final version of the game.

Looking through Leonowicz’s page on artstation, there’s some other concept art of Johnny Silverhand. Of particular interest are the multiple early sketches of Silverhand’s arm. These early looks at the shiny prosthetic show how it would be grafted onto Silverhand’s body. They’re also incredibly detailed, providing closer looks at the strips of cable that actually form the arm. A final picture depicts something a bit more curious — different versions of the hand with damage on it. It seems that at some point, Silverhand’s silver hand was going to get crushed or slammed against something.

If you’re interested in seeing more Cyberpunk 2077 concept art, head over to Leonowicz’s page on artstation. It’s chock full of early sketches and renders from the hit/miss game.