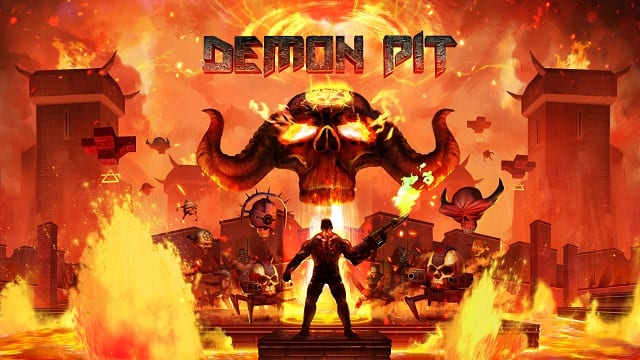 2019 is the year that gave the old-school first-person shooter a magnificent resurgence. Ion Fury is out today, and our review was about as positive as it gets short of a 10. Amid Evil released back in June, and it also had an equally positive reception. There are other examples out there, either already released or on the way. Today, publisher Digerati and developers Psychic Software and DoomCube joined that club. They’ve announced Demon Pit, a single-player arena shooter with the fast-paced trigger-happy action you expect from the best in the genre. And it looks like Doom and Quake rolled into one, somehow.

As the title should tell you, you’re in some sort of hellscape, attacked by hordes of demons in waves. That’s the Doom part. Except, if you look at the art style and the gunplay, I’d say it looks and plays more like Quake. To be clear, I mean both the original first titles from 1993 and 1996. It really does look like it’s Doom made with Quake engine (which is also the Half-Life engine, though heavily modified). And that’s a pretty cool combo for a new old-school FPS that looks as fast-paced and fun as it gets.

According to Paul Conway, artist and designer on Demon Pit, the development “has been an exercise in balancing speed, challenge, purity and chaos. I want players to fight forward, experiencing its unrelenting pace as they progress through waves of enemies and grasp for their place on the leaderboard.” You can expect 10 types of hellspawn to spray with bullets, and 7 varied weapons in total. A unique feature of Demon Pit is the soul grapple, which you can see in the trailer when the player does some pretty fast leaps, both to the sides and upward. It looks a bit like the Blink ability in Dishonored, which is pretty cool.

Other than that, you can expect all that retro-authentic, low-poly 3D goodness we’ve been seeing in all those new old-school shooters released recently. We’ll have to wait and see if Demon Pit is just as well-received. Based on the trailer, though, it looks like it might offer that uncompromising skill-based gameplay that fans of the genre expect.

Demon Pit is a collaboration between DoomCube and Psychic Software, two developers based in Galway, Ireland. It also features music by composer Thomas O’Boyle. It will release later this year on PC via Steam, but also on PlayStation 4, Xbox One, and Nintendo Switch. For more information, you can check the official website.

What do you think of Demon Pit? A bit too copycat or an original combo? Leave your comments below!

Superhot is now funding indies with Superhot Presents, but it’s totally not a publisher