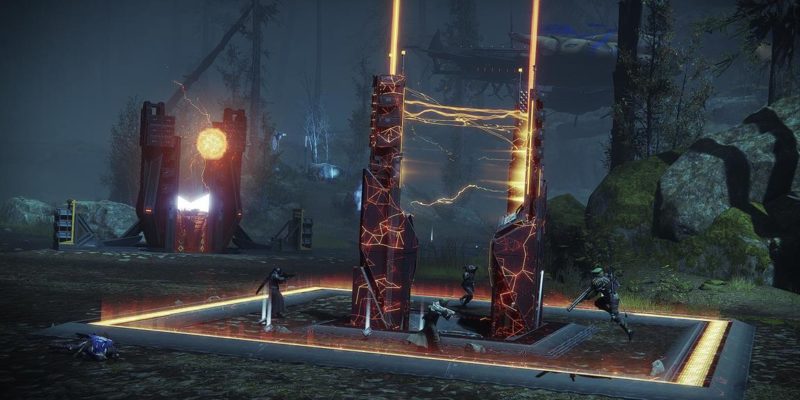 Destiny 2: Season of the Worthy has a new public event called Seraph Towers and it’s available for all players. Blueberries and little lights don’t even need the season pass. Here’s our mini-guide on how to successfully complete this activity.

Note: Before doing Seraph Towers and Seraph Bunkers, you’ll need to complete “Into the Mindlab,” an introductory quest that lets you obtain the Warmind Khanjali seasonal artifact. For more information about Destiny 2: Season of the Worthy, you can check out our guides and features hub. 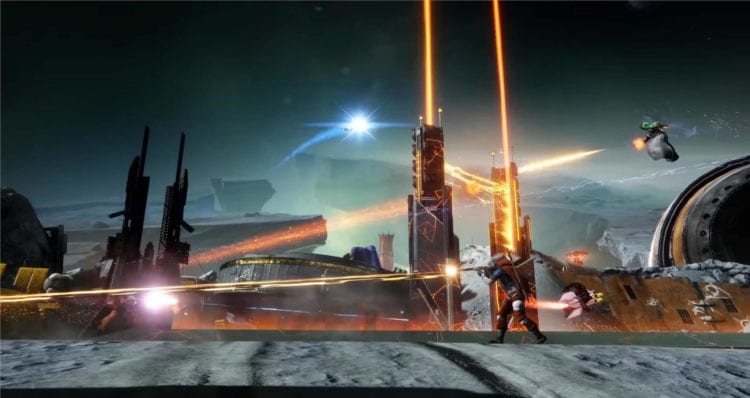 Destiny 2: Season of the Worthy – How to complete Seraph Towers

After completing “Into the Mindlab” and getting the Warmind Khanjali artifact, you’ll be told to head to the EDZ to check out Rasputin’s Seraph Bunker in The Gulch. Then, you’ll be asked to complete a Seraph Tower activity in the Winding Cove. You and other randoms will likely fail your first run. That’s totally fine. You only need to finish one event and success or failure won’t matter. Just follow the quest steps after that until you clear the Seraph Bunker.

Anyway, there are three Seraph Tower events in Destiny 2: Season of the Worthy. The first one you’ll spot is the one on the EDZ (Winding Cove) as part of the quest. The other two are on the Moon (Anchor of Light) and Io (The Rupture). Think of these events as similar to Escalation Protocol. Anyone can start the event and anyone who drops by in that patrol area can join in.

The difference between Seraph Towers and most public events is that there’s no heroic version. Also, unlike Escalation Protocol, there are no waves and, as far as I can tell, no amazing rewards to chase for (ie. a bit like the Ikelos shotgun). Instead, your rewards will be Warmind Bits. This is a new type of currency used to buy Rasputin’s Seraph Bunker upgrades which we explain in another guide. 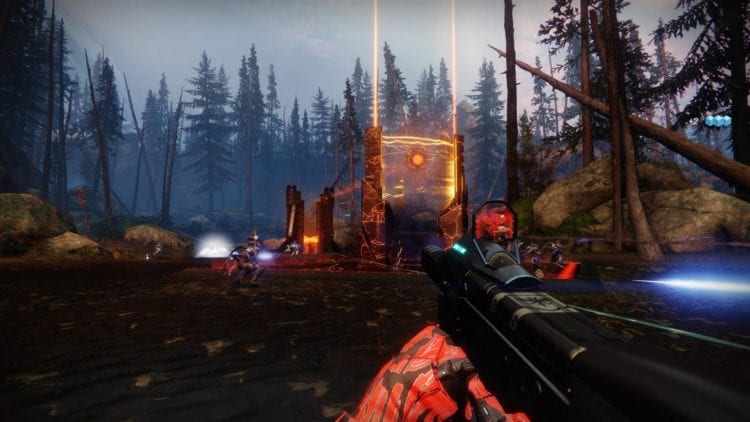 Regarding Seraph Tower mechanics, they’re actually quite simple. There’s a main tower that lets you start the event. Once it begins, there will be a support tower that spawns off to the side. You’ll have six minutes to do the following: 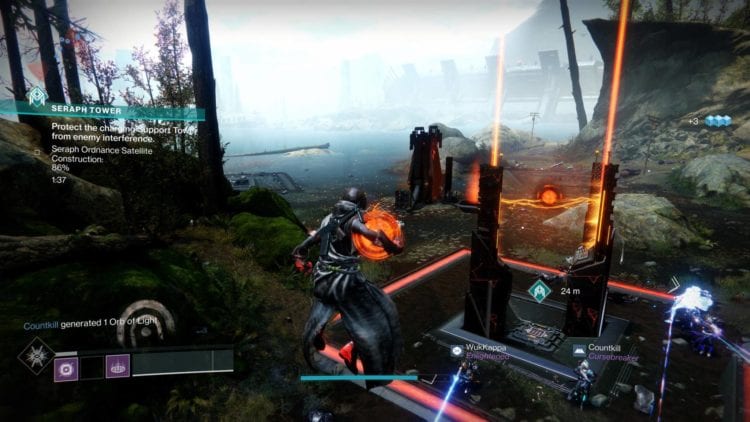 They were the champions, my friends

Once you reach 100%, a couple of champions will spawn and you have two minutes to finish them off. These can be of different varieties such as Barrier Hive Knights or Overload Fallen Captains. Naturally, you’ll want someone to have some form of anti-champion mod. These can be obtained by leveling up the Warmind Khanjali seasonal artifact. 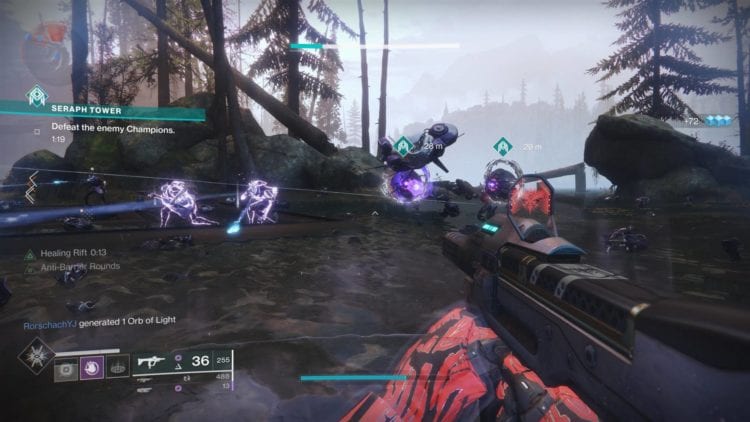 After the champions are dead, a small chest will spawn containing “two tokens and a blue” — the aforementioned Warmind Bits currency and blue gear. There’s also Rasputin’s Seraph Tower cache which is a larger chest. However, you’ll need Encrypted Warmind Bits to open these. You can refer to our EDZ Seraph Bunker guide for additional info about currencies.

Note 1: Failure to complete the Seraph Tower event will still yield a small amount of Warmind Bits, but the cache will no longer spawn.

Note 2: Once your EDZ Seraph Bunker reaches rank 4, the Seraph Tower chest can provide powerful drops but only once per weekly reset. 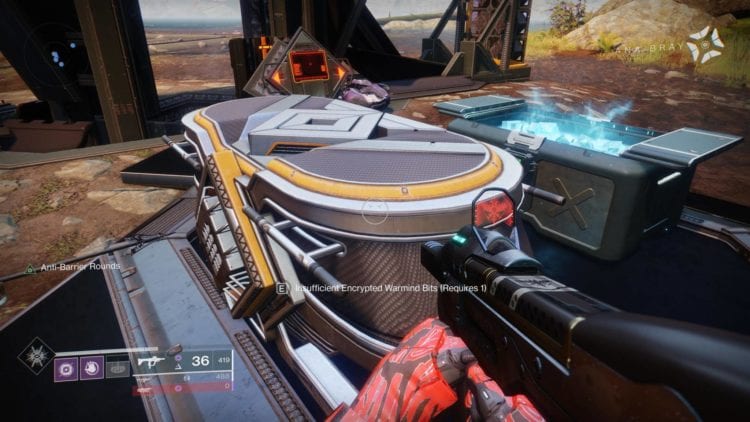 Destiny 2: Season of the Worthy‘s Seraph Tower activities aren’t hard at all. The main problems you’ll encounter are communication and player knowledge. As mentioned in our official review, players aren’t automatically opted-in when they head to a patrol zone, and there may be blueberries who don’t know that you’re typing instructions in the chat.

Also, this isn’t like the Menagerie or Sundial; there’s no matchmaking and planning while in orbit. As such, you’ll need to rely on anyone who ends up dropping by in the area just like Escalation Protocol. There are even some instances when a zone wouldn’t have players and you’ll need to keep going back and forth to find people such as while on the Moon and Io. 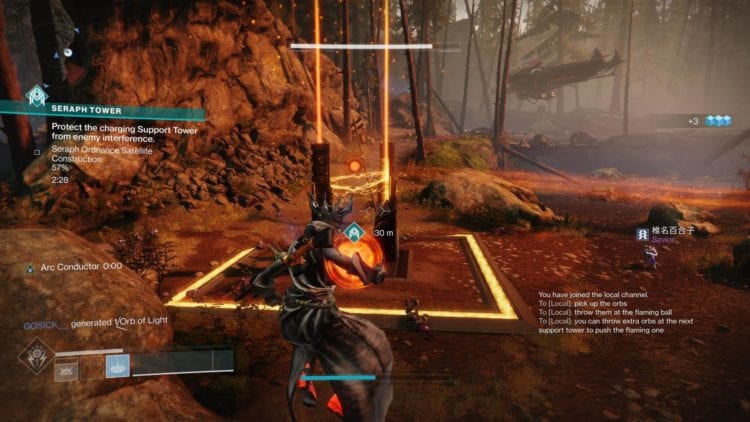 As for classes and loadouts, here are some tips: 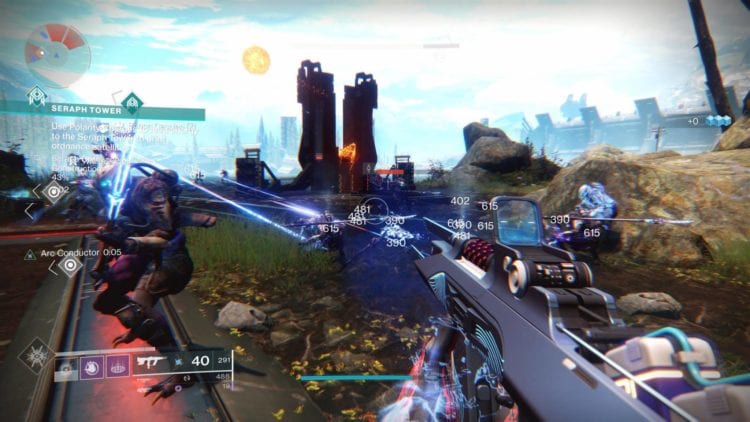