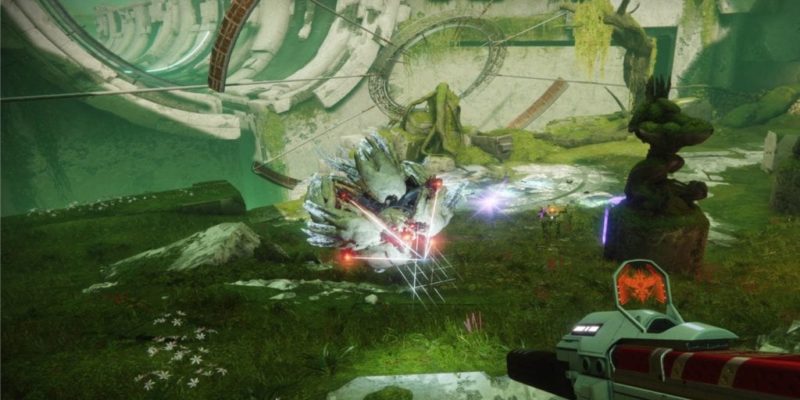 A month after Destiny 2: Shadowkeep‘s launch and we finally have the raid challenges. These have a secret mechanic for each Garden of Salvation encounter, one that players need to follow in order to gain extra loot. This mini-guide aims to give a more detailed look at the Leftovers raid challenge this week.

Note 1: If you’re new to Destiny 2: Shadowkeep‘s endgame content, then it’s best to check out our complete Garden of Salvation raid guide. This should help explain the general mechanics of each fight.

Note 2: The reward for completing raid challenges is an extra chest/loot. Given that you get double the pinnacle drops, its best to wait until Thursday to complete this. That’s because there’s a hotfix inbound that’ll increase pinnacle rewards from +1 to +2 power level. This is perfect for those looking to reach the 960 base power cap. Even a pop-up warns you about it once you start the game:

The Leftovers raid challenge is fairly easy enough to do. The mechanics were discovered by Destiny 2: Shadowkeep player Gigz who made note of it on Twitter:

Go through the first encounter without killing any Cyclops. There is 1 Cyclops in each room that you can kill to progress the encounter. A little confusing, but it makes more sense when you're in the encounter. The reward is an extra drop

That’s basically it. You just need to keep several Vex cyclopes alive throughout the first Garden of Salvation encounter.

The general rule of thumb is that if a Vex cyclops has already spawned once you enter a room, you can (and should) kill it, along with the rest of the mobs, to spawn the Angelic. If a cyclops spawns after a room is opened/after the Angelic dies, then it needs to be left alive.

Here’s how the entire run should go:

Check out a complete run from YouTuber Fallout Plays:

That about does it for the Leftovers raid challenge. You can expect one raid challenge each week, much like how things were during The Taken King and Rise of Iron expansions back in the first game, and for Destiny 2‘s Leviathan raid. Again, it’s best to wait until Thursday for the pinnacle rewards hotfix. The same goes for the Iron Banner’s pinnacle bounties which you can turn in on Thursday as well.

Destiny 2: Shadowkeep is available on Steam. For more information, you can check out our guides and features hub.