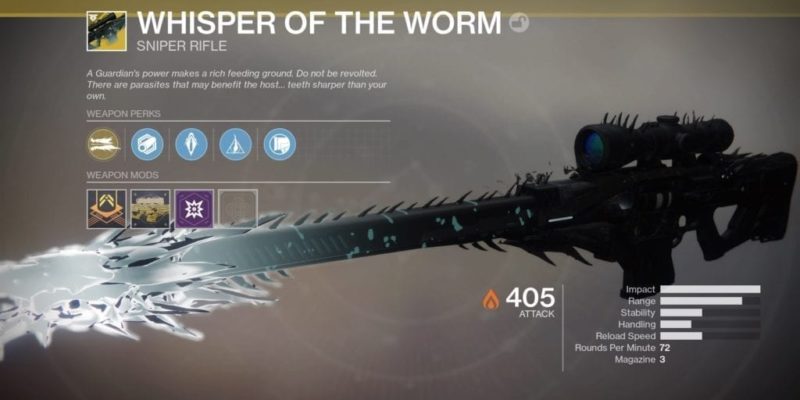 Earlier today, Destiny 2 players found “The Whisper,” a secret mission in one of the game’s locations. Community members joined in until it was discovered this mission would lead to an exotic sniper rifle known as the Whisper of the Worm. It is essentially Destiny 2’s version of the Black Spindle (or Black Hammer) to be more accurate. The weapon can be fired indefinitely provided you landed a string of critical hits which would return free ammo to your magazine.

Whisper of the Worm is also fairly challenging to get, that’s why PC Invasion has got you covered with every secret shortcut and tip there is. Please note that I’ve included gameplay videos of my completions. Although I do have the game for the PlayStation 4, the mechanics remain the same for the PC version of Destiny 2.

Wait for a Taken Blight public event in the Lost Oasis sector of Io. Be patient, it’s highly likely that you’ll spend hours hearing “Cabal again” because the wrong event is popping up. Once the Taken Blight starts, just look for a unique Taken enemy roaming the area. Kill it and a portal will open for you to bring your fireteam in.

This one can make or break your team depending on how fast everyone goes. The pathway to get to the part where you need to fight enemies and bosses can be tricky. You might fail a few times and need to wait for another event but don’t fret. Practice makes perfect. If ever you have problems making those jumps, try equipping a sword which might help you out. You can also equip exotic armor that can help with your jumping such as the Titan’s Lion Rampant and the Hunter’s Stomp-EE5.

Here’s a video of my run through the jumping puzzle.

The first shortcut is actually right at the beginning once you spawn in The Whisper secret mission. Instead of running all the way around the cave, jump on a tree branch and clamber up the ledge. You can destroy a mini blight which allows you to drop down the hole.

The second shortcut was discovered by Destiny 2 player Gigz and subsequently posted on Reddit by user GimmeFuel21. Once you reach the big, open room with grass ledges, simply look to the right side corner beside the rocks. You’ll see a small nook that you can crouch and fall down into, allowing you to get to the next area.

Once you’re past the jumping puzzles, it’s finally time to kill some aliens. The next rooms will be filled with Taken enemies out to delay your success while the clock winds down. Show them who’s boss by using your supers to clear them out quickly. In one of the rooms, you’ll also encounter Taken wizards and acolytes with void shields so make sure that you can switch to void energy weapons to take them out.

Also, you’ll be fine replacing your jump-improving exotic armor with something else to boost your damage. Ideally, you’ll want add-clearing subclasses such as an Arcstrider with Raiden Flux or a Stormcaller with Crown of the Tempests. Don’t pop supers at the same time and cycle them when necessary so that everyone will have theirs available for the boss fight.

Begin by clearing out the blights in the left, right, and center of the room. You don’t need to destroy the others, just these ones as the bosses will use them to hide for cover. Next, get one teammate to use a super to clear out the adds. This will spawn the first boss, a Taken captain which throws annoying, giant orbs that can blind you. Have another player use a super to take him out too.

When that Taken captain boss is around half health, the two other bosses will spawn — a Taken knight and a Taken centurion. The Taken knight’s pathing is hilariously terrible so you can snipe him at your heart’s content. The Taken centurion is a little more annoying since he throws big, homing globs.

Sniper rifles are your best friend here as you can easily whittle down their health with headshots while remaining at a safe distance. Here’s a video of a kill with when I was with an LFG team. I was already on my third character (Warlock) doing The Whisper secret mission. We had only five minutes remaining and I even arrived late since I was messing up the jumps badly, yet we still managed to do it.

Now you have Destiny 2’s version of the Black Spindle, what now?

Heroic Mode for the Masterwork Catalyst

First things first, rejoice. Now you no longer have to wait for the Taken Blight public event to start. You can fly into the Heroic Mode of The Whisper from your menu.

It has an Arc Singe modifier and that element will change each week. Equip your Arc weaponry and subclasses. However, remember to have something that’s void elemental for one of the enemy rooms later on, as well as your jumping shoes. There are no other differences between Normal and Heroic save for tougher enemies.

Once you complete the Heroic version, you’ll get the Whisper of the Worm’s masterwork catalyst so go ahead and put that on your weapon. In order to get 100 percent progress for the masterwork, you’ll need to collect Blighted Essences. These can only be obtained inside the The Whisper’s Heroic mode from secret chests and clearing it once more.

There are five secret chests inside The Whisper mission. Each one drops a Blighted Essence which adds to your masterwork progression for Whisper of the Worm. Here are their locations.

Chest #1: Just past the beginning part, in a nook to the right side just after you drop down the hole.

Chest #2: In the large room with eight circular vents per side, go down the far/top left vent. It’s the one opposite the far/top right where you usually drop down in to get to the next area.

Chest #3: Just after that, in the grassy ledge room, turn to the left and it’s hidden in a cubbyhole.

Chest #4: Still in the grassy ledge room, you’ll need to climb all the way to the top and then drop down to get on a tiny ledge. The chest is there.

Chest #5: Past that, instead of going left to run around the circumference, jump to the right instead. Follow the rock ledges until you get to a lone island with a portal reminiscent of Destiny 1’s Vault of Glass. Hop on the ledge and go around it for the fifth and final chest.

Once you’ve opened all five chests in one run, Oracles, those pesky buggers from Vault of Glass, will start spawning around in mid-air. There are seven of them in total so number them accordingly, 1-7, from left to right. Once all of them spawn at the same time, you’ll need to shoot and destroy them in a specific order for three successive sets. The puzzle was first solved by Destiny player Teawrex.

Doing this correctly will spawn a chest which contains an Enigmatic Blueprint. It’s an exotic ship which you can get by completing heroic mode each week depending on the weekly singe/elemental burn that it has. It looks like Arc Singe is not yet completed since you just got the blueprint. That means you’ll need to kill the bosses again.

Back to Heroic Mode

Yep, same as before. Do the jumping puzzle. Kill the mobs in the encounter rooms. Finally, take out the bosses. You’ll also notice a new modifier which increases damage based on the Whisper of the Worm masterwork completion. Once you’ve beaten the bosses, you’ll gain more Blighted Essences for your masterwork catalyst progress.

At the moment, you can only gain a maximum of 36 percent progress across all characters. Unfortunately, means you won’t get more even if you run the mission again on your alts. Much like the exotic ship blueprint, you’ll need to wait a couple more weeks in order to get it completed.

Do it again on your other characters

Even if you don’t gain masterwork catalyst progress on your alts, you can still go ahead and run The Whisper mission. It will always award a Whisper of the Worm/Black Spindle in the end. You could also help out some other Guardians looking to get the weapon. Remember that you’ll need to wait for the Taken Blight event just to do normal mode. After that, just rinse and repeat. 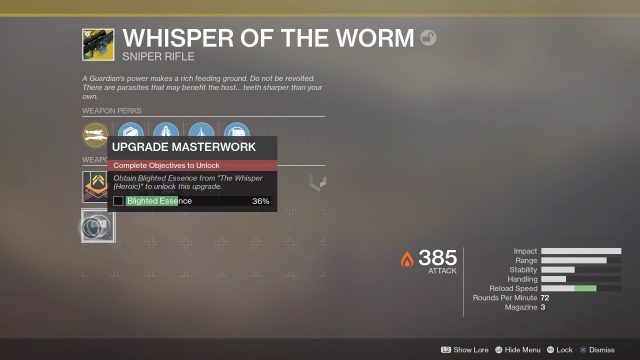 The Whisper of the Worm acts much like the Black Spindle or Black Hammer in Destiny 1 and is an amazing weapon to behold. Sadly, if you wish to obtain the cosmetic skins, you’ll need to shell out cash and buy it from Eververse. Oh well, no big deal unless you truly want those ornaments.

Still, the secret mission is fantastic and has breathed new life in the Destiny community. I know it did for me, as I’ve already completed the entire process (Normal > Heroic > Chests/Oracles > Heroic) on my Titan and Hunter. I’m in the middle of redoing the entire thing on my Warlock as well.

We hope this guide has helped you out with everything you need to know about the Whisper of the Worm secret mission in Destiny 2. Naturally, if you have any questions or concerns, let us know and we’ll happily provide more tips.

Get ready for the next Overwatch Free Weekend

By Jason Rodriguez59 mins ago
Guides