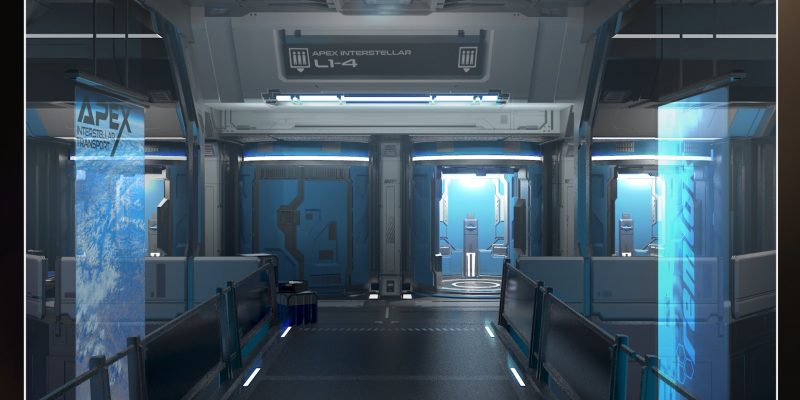 During the Future Games Show Spring Showcase, Frontier Developments treated fans to a look at the Apex Interstellar shuttle service coming to Elite Dangerous: Odyssey. For a fee, players will be able to hop into a space taxi and catch a ride to another planet. If you’re stranded in the middle of nowhere, you’ll also be able to hail a space taxi to come and collect you.

Elite Dangerous: Odyssey is the most significant expansion the space exploration game has gained to date. It will allow players to ditch their spaceships and explore planets like never before. It will also feature first-person combat with three types of sci-fi weapons.

In the new trailer from Frontier Developments, you can see this intense combat in action. However, we’ve seen a lot of the shots before. What we’ve never seen before in Elite Dangerous: Odyssey is the Apex Interstellar network. It’s just a pity we don’t get to see some inflight footage of the shuttle service.

Just as the nice woman behind the Apex Interstellar desk says, the shuttle system is your gateway to the stars in Elite Dangerous: Odyssey. You could fly your own ship. But wouldn’t you rather let an AI pilot do the hard work so you can sit back and enjoy the view? You can book local or long-range shuttles for a relatively small fee from the desk. Then you just head into the terminal area to catch your personal shuttle.

It all sounds very luxurious and convenient. Piloting a ship in Elite Dangerous is complicated. I’ve hit many a wall in my time as a space explorer. The Apex Interstellar system will make space exploration a lot easier for rookie pilots.

Elite Dangerous: Odyssey is scheduled to release on PC in late spring this year. However, the PC alpha launches in just a few days on March 29.