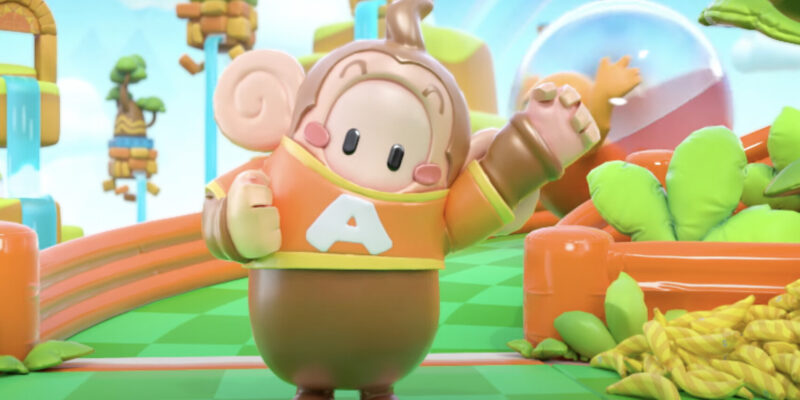 In just over a week, players can finally get their hands on Super Monkey Ball Banana Mania. The wait for this game has certainly turned out more interesting than many probably thought, especially considering all of the unexpected character trailers that dropped recently. Announcements like these probably contributed to more interest in the game than it would have received otherwise. And at the very least, it should offer plenty of fun to both fans and newcomers alike once it comes out. To tide players over in the meantime, the massively successful Fall Guys: Ultimate Knockout now features a Super Monkey Ball-themed AiAi costume that players can obtain from today until September 30.

As one would expect, the announcement of this celebratory crossover coincided with a trailer that briefly shows the in-game AiAi costume. The trailer specifically pays homage to the Super Monkey Ball series with the animated sequence at the start, which depicts a checkerboarded jungle environment reminiscent of the various obstacle courses from those games. Of course, this does not mean that Fall Guys will receive a Super Monkey Ball-themed map or mini-game. The in-game footage in the trailer mostly showed minigames already added in Fall Guys Season 5.

Much like Banana Mania, Fall Guys has seen plenty of strange crossovers, but the addition of the AiAi costume feels more natural than many of the others. After all, both Fall Guys and Super Monkey Ball task players with navigating through abstract, perilous obstacle courses. Additionally, Season 5 of Fall Guys sports a “jungle adventure” theme, which makes the crossover feel even more appropriate. Ultimately, the AiAi costume is a nice way for both Mediatonic and Sega to commemorate the upcoming release of Super Monkey Ball Banana Mania. Players of Fall Guys will want to hurry up and accrue 10 Crowns to unlock the costume before September 30 passes, as it will no longer be available after that.