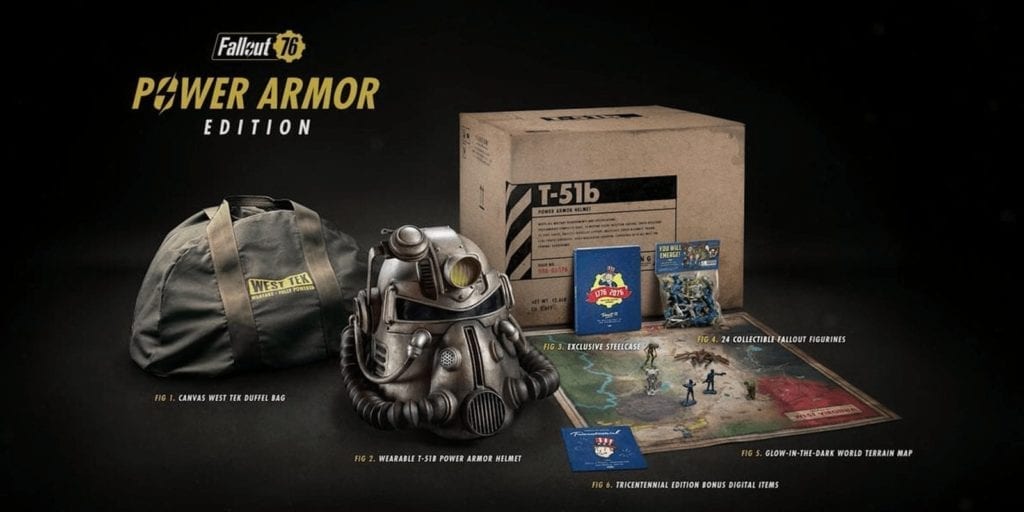 Bethesda just can’t catch a break, it seems. Fallout 76, their open-world MMO rendition of the franchise, is considered a critical flop. Critics and players consider it one of the worst games that the company has released. Similarly, their communications haven’t been stellar. Although they did mention some changes in the way they address criticism and speak to the fanbase, another fiasco has reared its ugly head. Enter “Nylongate” — Bethesda’s latest snafu. This time, it involves the Fallout 76 Power Armor Collector’s Edition which costs $200. While it originally touted a West-Tek duffel bag made of canvas, players have reported receiving a nylon counterpart instead.

We did a little bit of digging to find out where it all began: 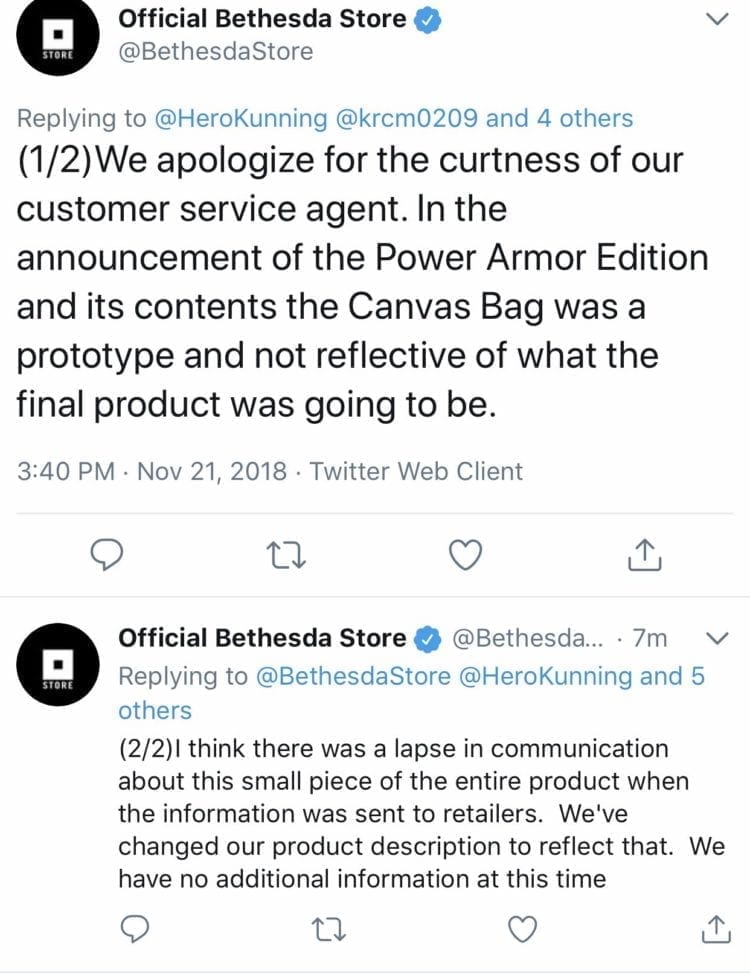 The above was presumably Bethesda’s initial reply on Twitter. A Twitter user by the name of @HeroKunning mentioned that he had received a nylon duffel bag instead of the promised canvas bag.

From there, other players have also chimed in. A Twitter user @LanternCupcake mentioned receiving a particular reply on November 21 regarding his email queries. Check out the user’s tweet below to @HeroKunning:

Response I got … so in the many months leading up to packing and shipping our editions they couldn’t let people know not happy @DCDeacon @Bethesda_ANZ @Fallout @bethesda pic.twitter.com/C8p5oIgV7Q

We Won’t Do Anything About It

From a cursory glance, we know that canvas fabric is marginally more expensive than nylon. If you’re buying backpacks or tents, you know that canvas is for the rugged sportsman, and nylon might be for the filthy casual (so to speak). So it’s a case of cutting costs to save. It’s still, however, false advertising.

Looking at Bethesda’s store nowadays would show that the Fallout 76 Power Armor edition will have a “Nylon Carrying Bag.” There’s just one more problem, the actual metadata of the store page itself does not reflect that. Here’s what it looks like when you search for it via Google:

Still, another related incident that has infuriated players was when a customer service representative replied curtly via email that, while they understand the customer’s frustrations, they simply “won’t do anything about it.” That’s since gotten gamers up in arms because of the dismissive way the respondent was treated.

It’s worth noting that the response shouldn’t necessarily be indicative of any company (although it does reflect poorly on them). We know that, more often than not, companies tend to outsource customer service jobs to countries like India or the Philippines, and there might be a handful of agents who aren’t well-trained. 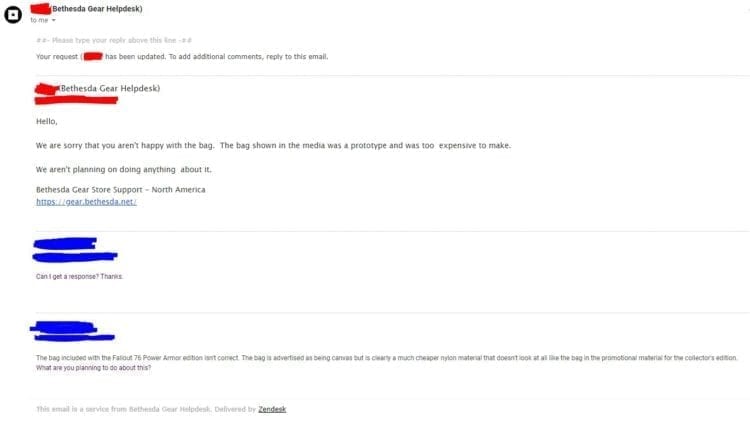 Note: As a former call center agent myself back in college (roughly 15 years ago), I can tell you that there only a few bad apples and a majority are out there to help.

It’s also worth noting that other players have come forward to cite that they’ve received damaged goods such as the wearable Power Armor Helmet. Some have reported items that were scratched or didn’t have sounds at all.

It might be bordering on an overreaction for players to suddenly feel that the bag was the be-all-end-all of the entire collector’s edition. For instance, the aforementioned @HeroKunning admits that he does enjoy the game. He just didn’t like how shipping was handled.

You Get An Atom, Everyone Gets An Atom

Still, Bethesda could have easily salvaged the entire situation and earned some brownie points by doing the following:

Easy as pie, right? Instead, they did something that would make you roll your eyes. First, they apologized for the CSR’s behavior:

“The Bethesda Store’s Support member is a temporary contract employee and not directly employed by Bethesda or Bethesda Game Studios. We apologize to the customer who took the time to reach out. The support response was incorrect and not in accordance with our conduct policy. Unfortunately, due to unavailability of materials, we had to switch to a nylon carrying case in the Fallout 76: Power Armor Edition. We hope this doesn’t prevent anyone from enjoying what we feel is one of our best collector’s editions.”

All good until you reach the end where Bethesda mentioned they’d offer 500 Atoms instead. Atoms are premium currency in Fallout 76, and 500 Atoms are worth $5. For that measly amount, you could buy a Vault 76 cap in the game.

Still, hats and in-game currency wouldn’t be enough to allay the disappointments of those who pre-ordered. Remember, people who pre-order comprise your most hardcore and loyal fanbase. That means you need to take these concerns seriously, especially since they’re the ones who are willing to drop $200 before they even know about the game’s quality.

Bethesda’s response to the situation now has 15,000 downvotes on Reddit. That’s just as much as their initial copy-pasta from a few days ago. These missteps in Nylongate are, indeed, a failure on Bethesda’s part. Sadly, a failure is essentially what Fallout 76 is in the eyes of many players.

Oh, and here’s the actual bag, by the way: 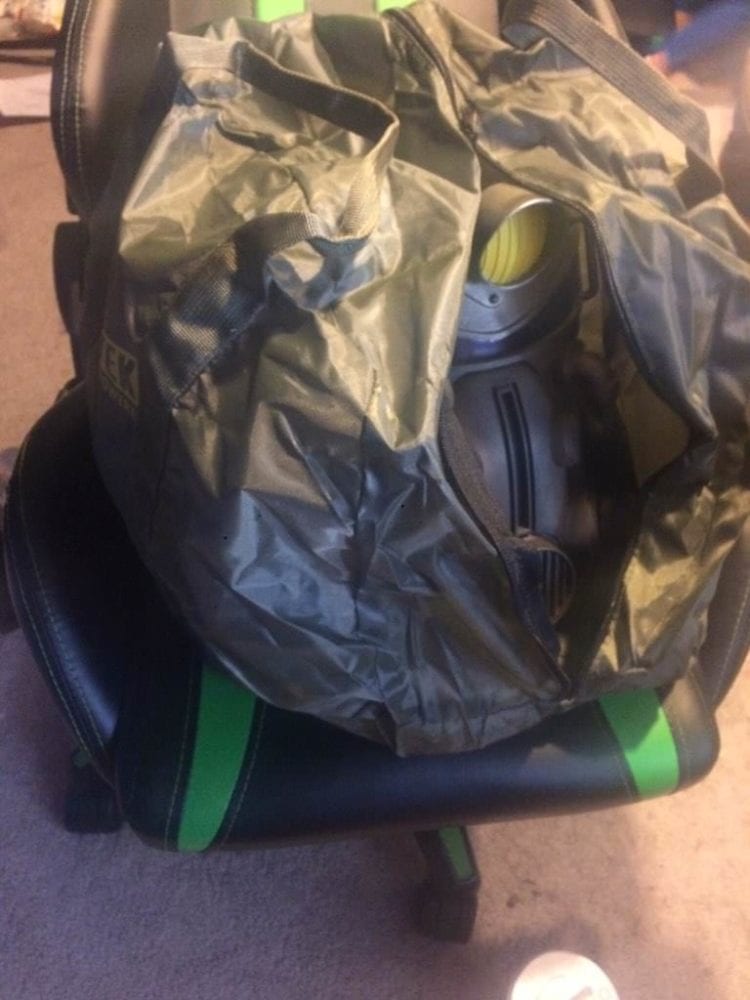