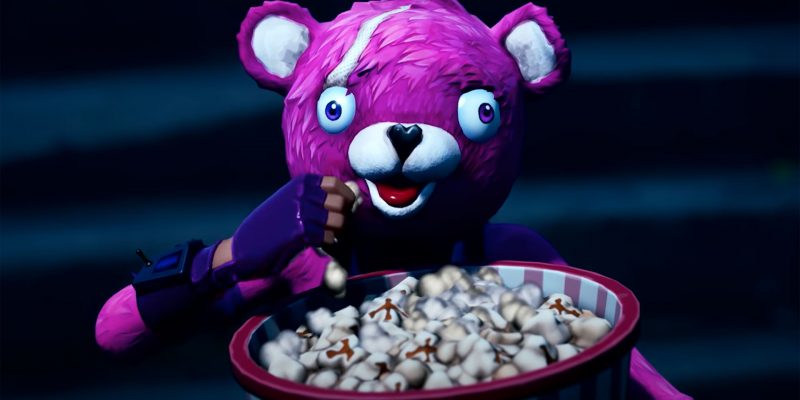 You’ve seen virtual Fortnite concerts. Now get ready for… virtual movie night. Epic Games is hosting a Fortnite film festival in just a few days. The event, cleverly titled “Short Nite,” will feature a series of short films in Fortnite‘s Party Royale mode. The pandemic is still affecting movie theaters around the globe, but thanks to this event, you can still visit the cinema with your pals.

The Fortnite film festival will begin on February 20 at 2:00 PM ET and run for 24 hours in Party Royale mode. The actual film series itself will run for about 30 minutes and repeat for the entire day, so there are plenty of showtimes available. Of course, a movie night isn’t complete without popcorn. Fortnite will make a Jumbo Popcorn emote available in the item shop the night before the film festival. A video of the emote shows a player sitting down with a massive red-and-white striped tub of popcorn, chomping away as they’re engrossed in a film.

Check out a trailer for the Fortnite film festival below. Animated film buffs may recognize a few of the featured shorts. One of them is 2012’s Rollin’ Safari, which imagines a life where safari animals are all round.

The Fortnite film festival will feature critically acclaimed shorts from all over the world. Some of the films have even received Academy Award nominations for Best Animated Short Film. No tickets are required for the event. Simply head to the Big Screen in Party Royale mode and wait for the event to begin, or pop in for a later showing. You can enable subtitles in your preferred language to watch films with dialogue. Grab your friends and enjoy Fortnite‘s feature presentation.

Virtual fun for everyone

This short film festival is just the latest form of virtual entertainment in Fortnite. During the height of COVID-19 lockdowns in April 2020, Travis Scott partnered with Fortnite to perform a virtual concert. Similar concert events have since followed, as well as a live viewing of the huge Galactus showdown in Fortnite Season 4. Party Royale mode has become a creative virtual hangout space for friends to take a break from battling.

Overclock your AMD Ryzen 5000 CPU to 5GHz with this software