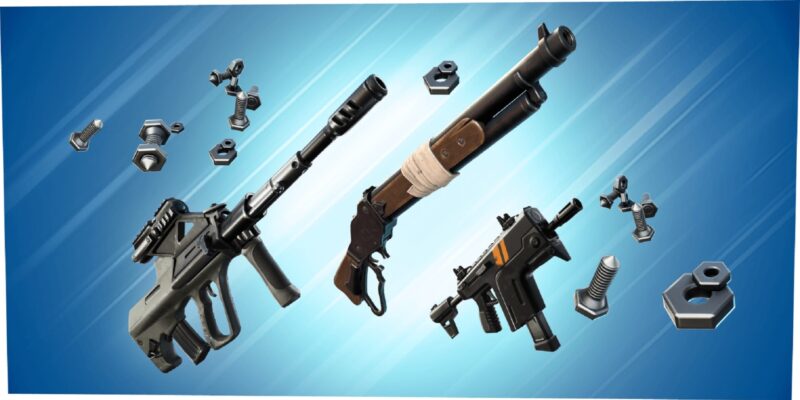 Fortnite Season 7 and the alien invasion is well underway. The season has already provided players with some extraterrestrial themed weekly challenges, new IO weapons, and much more. However, you may notice that a weapon shown off in the Season 7 battle pass trailer is still missing from the game. This is the weapon that allows you to pick up objects around the map and throw them. In the trailer, Rick Sanchez is shown picking up a taxi and throwing it at a gas station. Now, it appears that the release of the Grab-Itron in Fortnite may not be too far away.

The well-known leaker in the Fortnite community, HYPEX, shared a short video of some Grab-Itron gameplay. In the clip, the player shows off the weapon’s ability by picking up a couple of barriers. As you can see, the weapon is able to hold one of the objects for quite some time. Also, the barriers were able to be thrown at longer distances. HYPEX notes that the bigger the object is, the more damage it will deal upon impact. In addition, the damage dealt depends on the material of the object thrown.

Will the Grab-Itron make itself at home in the Fortnite meta?

At the time of writing, it is unknown when the Grab-Itron will be released into Fortnite. There is no doubt that players are looking forward to trying out this unique gravity-manipulating weapon. From the first initial look, the weapon may not fit into the current meta, but it will definitely be a fun addition to the battle royale. Perhaps it could be an interesting way to distract your opponents while you push them with your squad. With that being said, it could be powerful depending on how much damage it deals to structures and enemy players.

Remember that the bigger the object the more damage it deals + depends on object materials too!pic.twitter.com/67hjlwuyMy