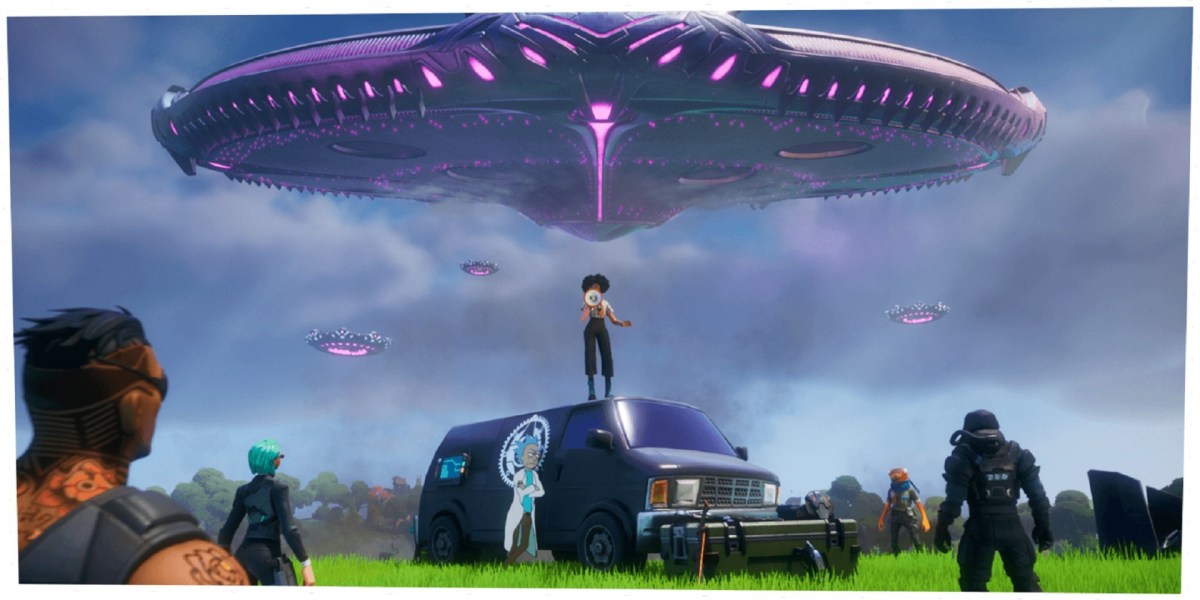 We’re now going from the Stone Age to the future in Fortnite Season 7: Invasion. There are aliens with UFOs, more super heroes, and even a Rick and Morty crossover. On top of that, there’s another long list of gameplay changes meant to spice things up for another couple months of play. This season is particularly interesting due to the mix of new content and classic weapons/mechanics. Thanks to the new content alongside the return of launch pads, snipers, and other previously popular weapons, what’s old is new again.

While this season didn’t feature as much narrative content to go along with the alien invasion, there is still a quick trailer to watch. However, once you jump into the game, you’ll quickly realize how confusing Fortnite Season 7: Invasion is upon landing for the first time. You see, all of the content in the trailer isn’t immediately obvious.

Epic’s patch notes are also a bit shaky right now at best. Perhaps this season is all about discovering the unknown. That doesn’t need to be a problem for you though. We’ve put together a list of guides on how to do everything from getting the new UFOs, to acquiring the best weapons, completing Quests, and finding the right NPC characters.

This list will also continue to grow throughout the season, so check back regularly for more features and guides for weekly challenges and secret content. Here’s the Battle Pass trailer below in case you’re wondering what the rewards look like this season.

All map changes and new locations – There are just a few changes to points of interest, but Epic added a lot of new sights to see in other places. Check out the new IO bases all over the map.

Where to find all of the NPC characters – There are 17 of them this season. They don’t offer all the perks they did previously, but you’ll want to visit them still. Some more than others.

All Bounty Board locations around the map – While not as important as previous seasons, you’ll need to pick up bounties at some point. Bounties are an easy source for earning gold bars still and interacting with a Bounty Board is the only way to get Bounties now.

Where to find Weapon Upgrade Benches – NPC characters no longer offer weapon upgrades. You’ll need to find of these stations to get yourself some better guns.

How to catch Living Loot Llamas – These piñata-looking loot crates are now living creatures that will spit items at you while they run away. Learn how Epic overhauled Llamas this season and what you need to do to get them.

Where to find Cosmic Chests and how to open them – These rare new chests offer enough rewards for the whole team. You never know what the reward will be, but it’s bound to be good. You can also receive additional Alien Artifacts from them to further customize the Kymera skin.

How to find UFOs and use them – Become the invaders with these fast new flying attack ships. You can even bring the whole squad along for the ride.

How to remove alien parasites – These creatures are everywhere now. If you happen to fall victim to one of these parasites, it’s good to know how to remove them. Or why you should let them feast upon you.

How to always win the alien mothership minigame – The next time you and your team get abducted, you’ll know exactly what to do to earn all of the gold loot you could possibly need.

Where to find the Zyg and Choppy Mythic Ray Gun – Ray Guns offer massive DPS potential, and none other is better than the Mythic variant. Here’s where to find the boss that carries it.

Aliens add new biome at Holly Hedges and Believer Beach gets trashed – Map changes are nothing new to each season. Check out the new zero gravity zone.

You can now drive Ferraris in Fortnite – A new partnership introduced the iconic Italian Stallion to Epic’s battle royale. These things are fast, and that’s an understatement.

New update adds preferred weapon slots – This new feature will reduce the time it takes for inventory management to ensure you have your weapons automatically arranged in the slots you want.

LeBron James available in the item shop – The basketball superstar is now a buyable skin in Fortnite. You can get several looks for him along with backbling, an awesome glider, and pickaxe. Some are sold separately if you don’t want to pay for the full bundle.

Grab-itron added and Slurpy Swamp gets abducted – The 13.7 midseason update added a new alien weapon that let’s you alter gravity and manipulate objects. Slurpy Swamp is also slowly getting sucked up into the mothership by a tractor beam.

Epic Games announces the Rift Tour, featuring Ariana Grande –  The next big concert series features another A-list artist. The Rift Tour takes place over several days and includes challenges to complete plus a chance to buy Ariana Grande skins at the in-game store.

Superman finally unlocked, multiple styles available – Find out how to unlock the Man of Steel and what cosmetic options you can flaunt.

Fortnite developer hints at the return of Kevin the Cube – Remember that giant glowing purple cube that kept moving around the map during Chapter 1? According to the chief creative officer of Fortnite, it’s coming back. 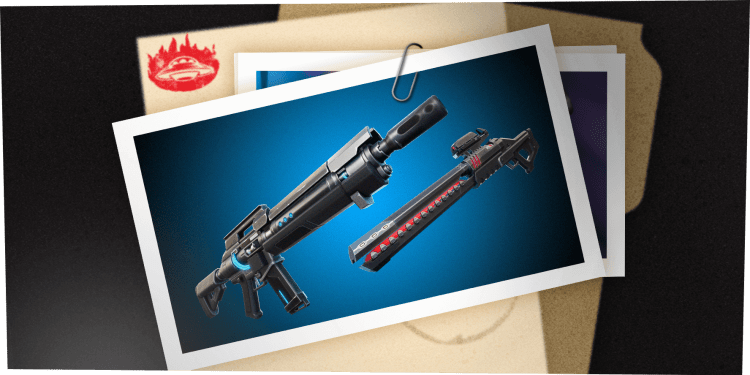 Epic teases alien shotguns for Season 7 – Remember this? Epic hinted at a lot of things for Season 7. The Pulsar 7000 shotgun was an obvious clue, but it’s not in the game at the moment. Check our weapons changes guide to learn more.

All new weapons, weapon changes, and crafting mechanics – Knowing what’s gone from the Primal season and what’s new is the key to victory. Be sure to learn what each of the new weapons do and how to get them.

Where to find all exotic weapons and the prices – Everyone loves weapons with special properties. There are a few to grab this season, but you’ll need to know who stocks them and how much gold you need.

How to get the Mythic Pulse Rifle – Only one NPC has a mythic weapon at the moment in this season. Here’s who you need to see for this high damage precision rifle.

Update adds Alien Nanites with multiple uses – From upgrading weapons to creating zero gravity biomes, these strange items have the potential to greatly influence a match.

Inflat-A-Bull item added that lets players bounce – You can now get inside of a giant cow… er, bull that bounces with each impact. It’s actually great for moving around the map if you can use it correctly.

Plasma Cannon added to decimate structures – This new IO weapon looks and behaves more like an alien weapon if anything. You can use to blast through enemy structures to disrupt those pesky turbo builders.

Grab-itron added and Slurpy Swamp gets abducted – The 13.7 midseason update added a new alien weapon that let’s you alter gravity and manipulate objects. Slurpy Swamp is also slowly getting sucked up into the mothership by a tractor beam.

Prop-ifier item added, allows you disguise on demand – Find out how this new item works so that you can choose a disguise to fool your enemies. We also cover how to find it. 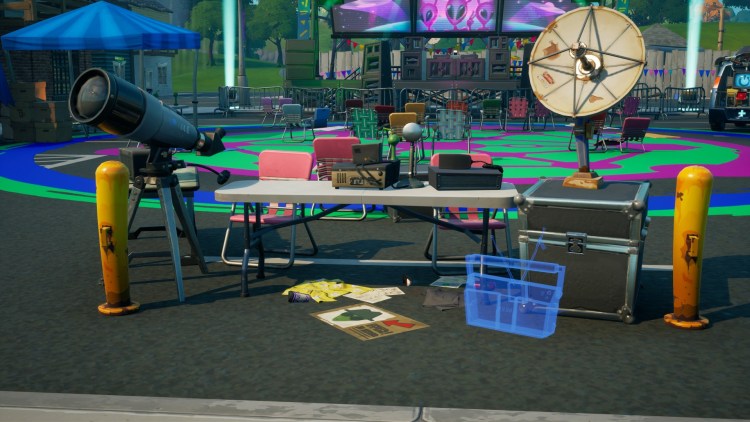 Where to find a payphone location – One Quest tasks you with visiting a payphone to answer the call. Learn where to find one of these to claim the 30,000 XP reward and how to use them to get more gold bars.

Where to place rubber ducks – This Week 1 Quest is simple enough. You just need to deploy some rubber duckies to the right spots to earn 30,000 XP.

How to get Superman and Rick Sanchez skins – These two are sure to draw the crowds. Learn what you need to do to become the Man of Steel and a mad scientist.

Where to find Mending Machines – You’ll need to find one of these healing-oriented vending machines to complete this challenge and earn the 30,000 XP reward. Here are the locations.

Where to find and interact with a Dead Drop – There’s a mysterious message you need to look into. Travel to the Dead Drop locations to learn more and get 45,000 XP.

Where to place boomboxes to get the party started – Become a hype person and the recipient of 30,000 XP for placing these boomboxes in the correct locations at Believer Beach.

How to search the farm for clues – One of the Legendary Quests requires you to track down clues at one of the farms on the map. You’ll want to complete this step to collect on the greater XP reward for the latter steps in this Quest arc.

Where to find the Doomsday Preppers guide – Progress the narrative and see how characters are dealing with the alien invasion while getting 30,000 XP along the way. 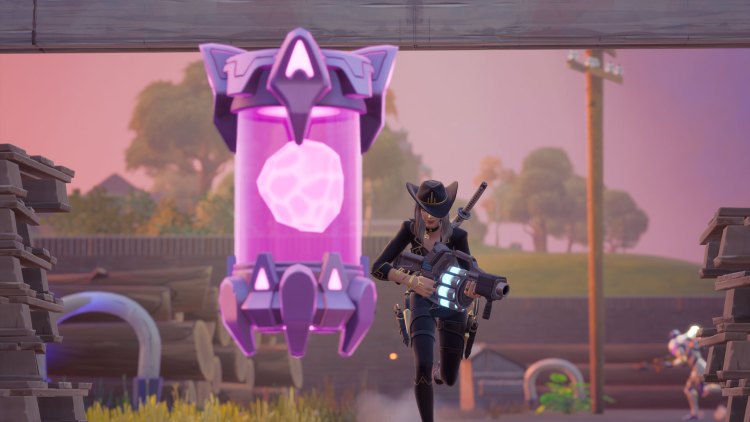 Where to find Alien Artifacts during Week 1 – If you want to give your Kymera alien skin a truly unique look, you’ll need to get as many of these Alien Artifacts to unlock the different styles.

Where to find Alien Artifacts during Week 2 – A new round of Alien Artifacts showed up for Week 2. If you want 20 more points for purchasing customizations for the Kymera skin, you’ll want to seek these out.

Where to find Alien Artifacts during Week 6 – Once again, you can collect five more of these to earn 20 more points. Find out where to look this week.

Where to find Alien Artifacts during Week 7 – Just like the previous weeks, you can find five more for Week 7. Here’s the fastest way to collect them all.

Where to find Alien Artifacts during Week 8 – Five more artifacts are up for grabs this week and you’ll be able to get them all in one game if you’re fast.

Where to find Alien Artifacts during Week 9 – This week should prove fairly easy as long as you follow this strategy.