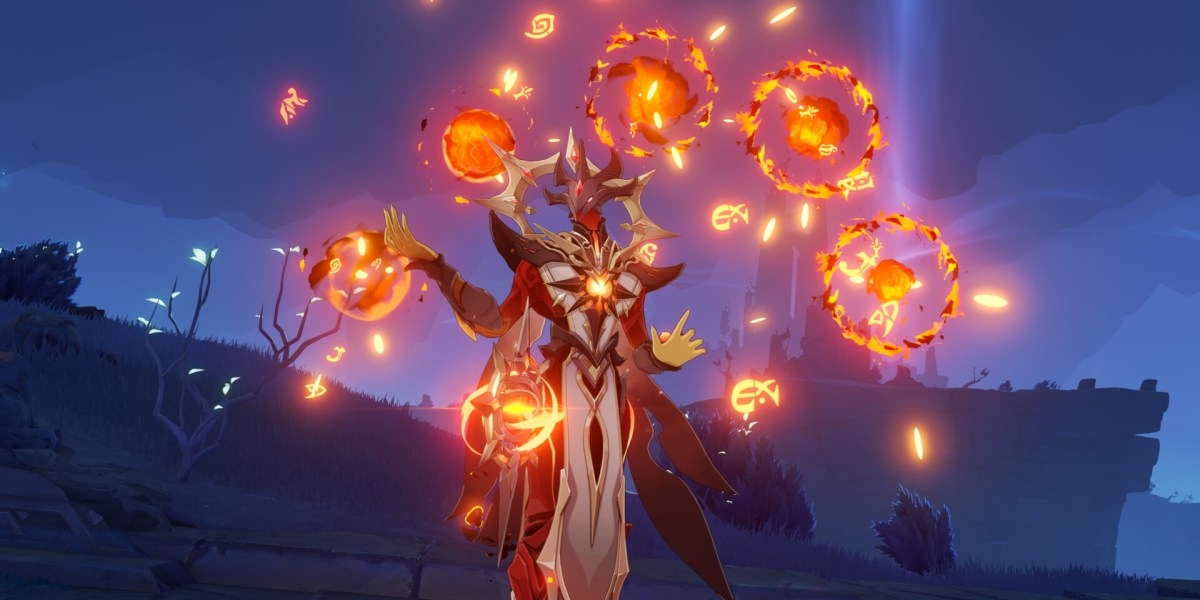 After acquiring the three fragments, return to Dainichi Mikoshi when it’s Evernight and talk to Aru. The shade will activate an elevator that you can ride all the way down below the shrine. There, you’ll face off against three Bathysmal Vishaps (these are just the same mobs you’ve seen before while exploring the zone).

Once you’ve eliminated them, Enjou makes his return. He finally reveals his true identity as a member of the Abyss Order. The Abyss Lector Fathomless Flames enemy in Genshin Impact is akin to its Electro counterpart in that it relies more on projectiles and ground explosions. Here are its abilities: Once its HP drops to 25%, the Abyss Lector Fathomless Flames will summon a couple of Abyss Mages (Pyro and Cryo). Likewise, it’ll cast more often, including a Meteor Strike, and it’ll be protected by a Pyro shield. You can use Hydro attacks to break this, but you should also be mindful of the Dark Furnace. This is a small crystalline object that floats near the lector (it looks like the objects in the La Signora encounter).

If you destroy the shield, the fight will end, too. The Abyssal Lector/Enjou will teleport away. You can return to Tsuyoko in Sangonomiya Shrine to give her the Bloodcoral Branch and finish the Enkanomiya main quest arc.

Note 1: Completing this arc unlocks the Bathysmal Vishap Herd battle in Dainichi Mikoshi. This is where you can farm the Dragonheir’s False Fin material for Shenhe.

Note 2: When you’re finished with the arc, a shade NPC named Erebos will appear in Enkanomiya – Serpent’s Heart. You’ll be able to do the Erebos’ Secret quest chain. By Leo Gillick30 mins ago
Guides

How to increase weapon proficiency in Fire Emblem Engage