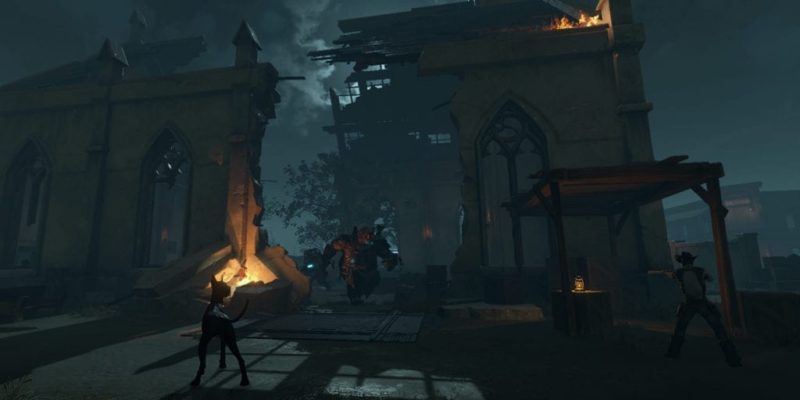 Get really into the game with today’s giveaway for a Steam key for Stay Silent VR.

Having played a few VR titles, the focus is usually immersing the player in the visual aspects of a gaming experience. After all, humans have evolved to rely primarily on sight as a means of gathering information. Wouldn’t it be cool if a game made you depend on more than just your vision to take out your enemies?

Well, Stay Silent does that. Come take a free beta key and check the title out for yourself!

It’s the late 1800s in the western frontier. You’re a sheriff tasked with investigating the strange activity in a local township. Unfortunately, aliens have invaded, and they’re using their advanced technology to stalk humanity! You must use your wits — and their own weapons against them — to work around their defenses and stop a full-scale invasion in this PvP shooter.

Western-Style FPS Action Meets High-Tech Alien Gear
Wield controllers to use up to ten types of western firearms and over a dozen interactive items in the game with real actions. Use your expert shooting skills combined with high-tech alien equipment such as laser blades to destroy your enemies hiding in the darkness.

Immersive Stealth Battles
You and your enemies both have stealth equipment – you cannot see each other, but the moon can reveal your shadows and your voice will expose your position. Act with caution and use your vision and hearing to find the enemy hiding in the darkness and seize victory.

Multiple Battle Modes
In addition to solo games, you can also invite friends to fight side-by-side with you against two enemies.

Those aliens think they’re so smart, but they can’t even figure out how to hide shadows. Typical alien arrogance.

You don’t have to win anything — just take a key from the widget below! We have a limited amount, so once they’re gone, they’re gone.

The beta period runs from April 11-17 and is available for HTC Vive and Oculus Rift users. You can check out Stay Silent‘s Steam page for more info.

Troy Baker Turned Down The Role Of Rhys For Borderlands 3, Pitchford Says