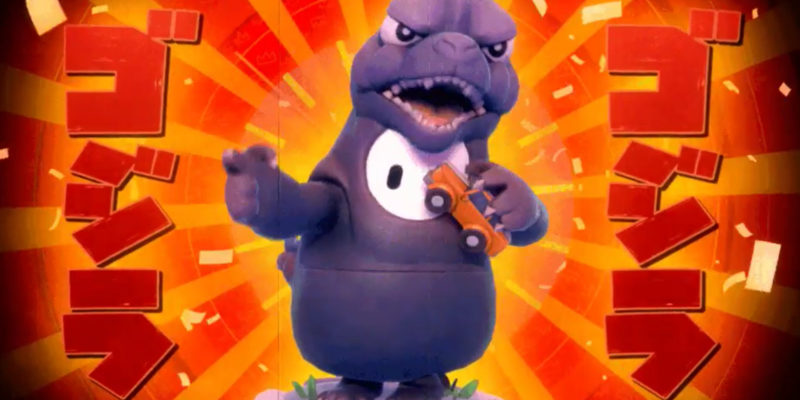 Mediatonic really knows how to get Fall Guys fans going. Earlier in October, the team brought the blue blur, Sonic The Hedgehog to the gameshow battle royale. Admittedly, it isn’t the finest Sonic has ever looked. Next up on November 3, Fall Guys will add another iconic costume in the rampaging form of Godzilla – complete with a car in hand. According to the Fall Guys Twitter account, this an official Godzilla costume.

The release of the Godzilla costume coincides with Godzilla Day. Which apparently is a thing. Who knew? As with all of the previous limited-time costumes, you can expect this one to set you back 10 Crowns – five for the top and five for the bottom.

You can get your first look at the ferocious monster in the tweet from Fall Guys below. It looks ferocious, but also like it knows how to party. I think it’s safe to say Godzilla’s transformation into a bean costume came out a lot better than the tubby Fall Guys Sonic.

Fall Guys is currently in the middle of Season 2, which has brought the medieval spirit to the battle royale. There are new stages to master, a new pass to make your way through, and plenty of knights and wizards running around. Godzilla will fit right in with the Fall Guys dragons and other medieval characters. Except for the “futuristic” motor vehicle it’s wielding.

If you’re worried about missing out on a Fall Guys Godzilla costume because wins (and Crowns) are hard to come by, you can check out our guides on the various stages. If you still can’t scrape enough Crowns together from wins after reading those, then focus on the Season 2 pass. Reaching level 26 will earn you a total of 11 Crowns. Enough for a Godzilla costume with one Crown to spare.

By Andrew Farrell1 hour ago
Previews