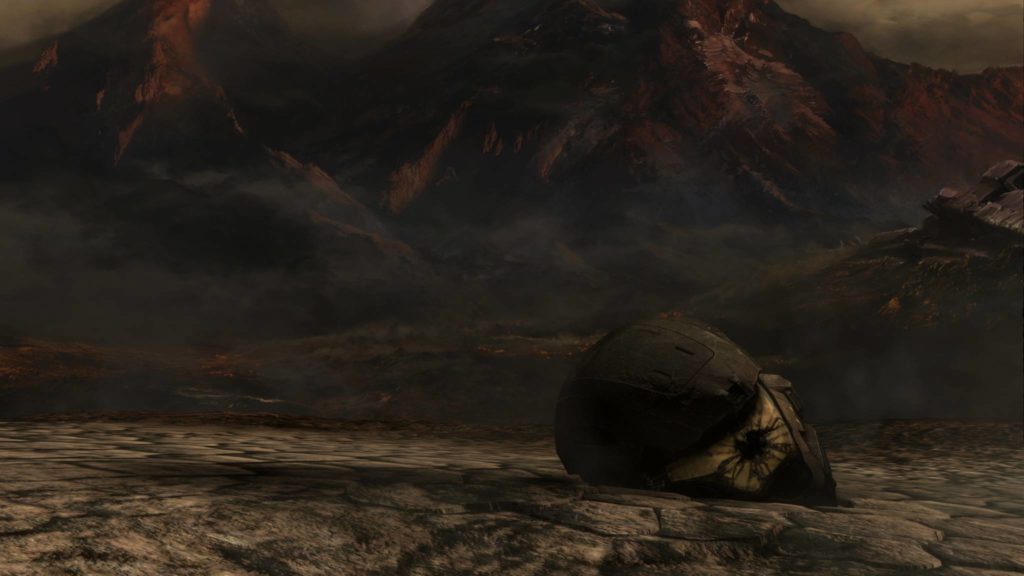 Halo: Reach is the first game released as part of Halo: The Master Chief Collection. It’s also the first time that it makes its way to PCs, touting 4K UHD support and unlimited framerates/no FPS cap. But, there are a few issues that mar Halo: Reach‘s recent PC launch, including the wonky audio. Let’s delve further with our technical review.

Note: Here’s what Halo: The Master Chief Collection‘s main menu looks like. Only Halo: Reach is available for now, but other games will be unlocked later on. You can also check out our official review of Halo: Reach. 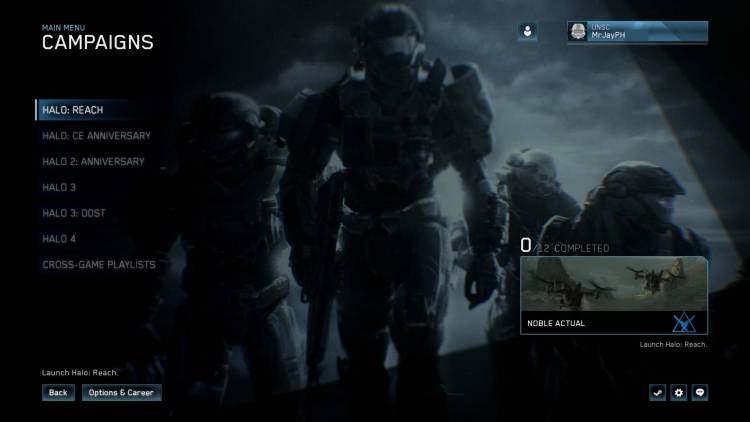 My rig’s specs are significantly better than what’s recommended, so running Halo: Reach shouldn’t be a problem. Normally, we’ll discuss the graphics options and comparisons already just like in other technical reviews. However, we’ll need to look into how signing in works first. 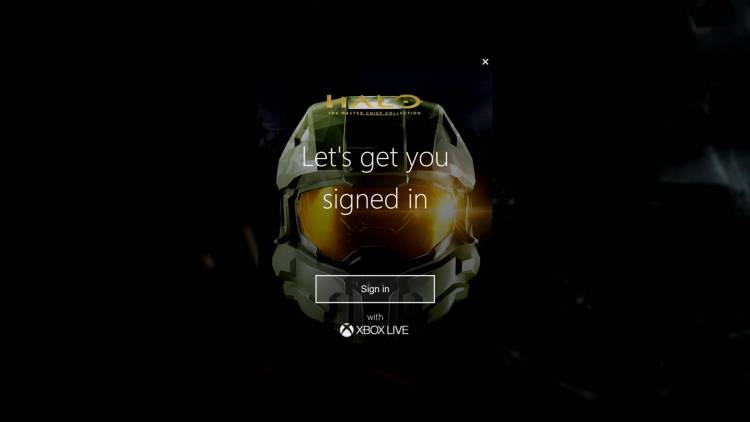 It’s worth noting that Halo: Reach — and likely all other games in Halo: The Master Chief Collection — will require you to sign in with a Microsoft account first even if you made your purchase via Steam. In my case, I haven’t used an Xbox Live account in a very long time. I was actually quite surprised that one of my emails was already in use (apparently I had created an account using that email ages ago).

I was assigned a random, generic gamertag, one which was completely different from anything resembling my Steam ID. I had to download the Xbox Companion app for Windows just so I could switch to the gamertag I preferred. Still, you won’t need an Xbox Live subscription just to play, so don’t worry about that.

If you check Halo: Reach‘s Career options, the only options related to your ID which you can change in-game are: 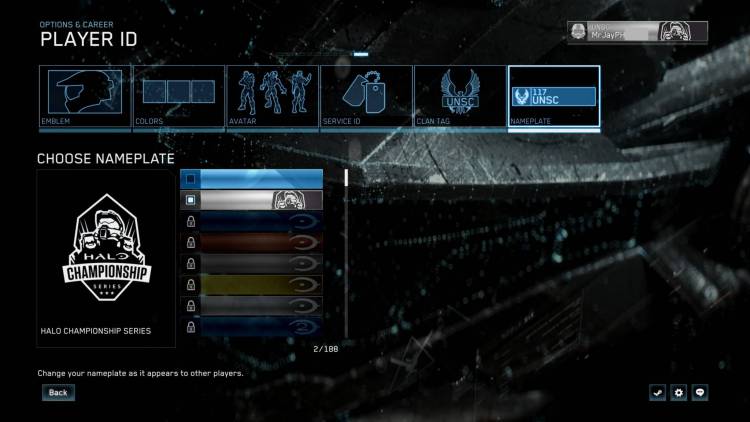 Moving on, let’s take a look at Halo: Reach‘s graphics settings for PC. You’ll see below that there are only a few options that you can change. These include resolution, v-sync, framerate cap, gamma/brightness, and the field of view (FOV) when you’re on-foot or in a vehicle. You can also change the HUD elements to be centered or on the edges of your screen if you have an ultrawide display. 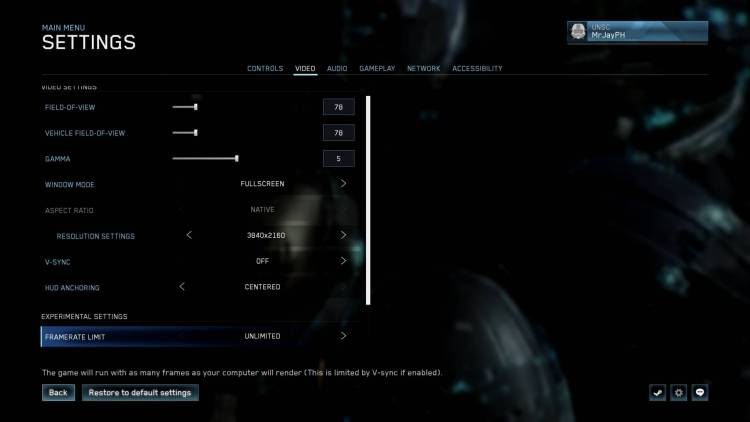 Not seen in the screenshot are your graphics quality settings. You don’t actually have detailed customization options in Halo: Reach. Instead, what you’ll have are three presets:

The omission of additional graphics/visual settings is quite a surprise indeed. After all, many PC players might be excited at the idea of being able to toggle or tweak different settings (ie. post-processing, texture detail, shadow quality, and more) to their liking.

I’ve selected three sets of images looking at various graphics presets. I’ve also added 1080p screenshots in case you want to see what Halo: Reach looks like if you downscale from 4K UHD. As usual, click on each image for a larger view. 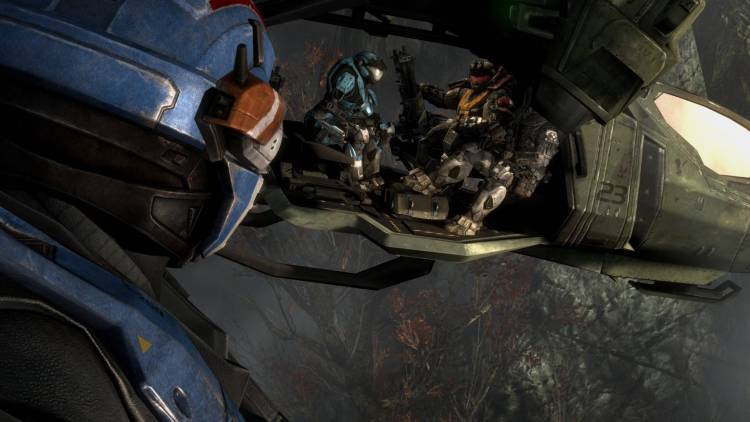 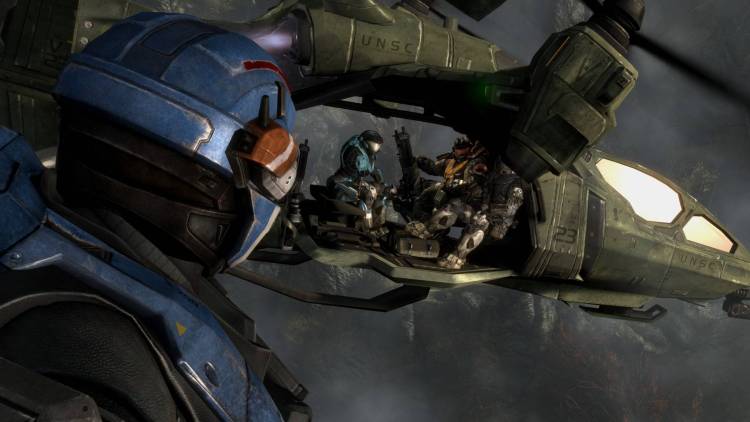 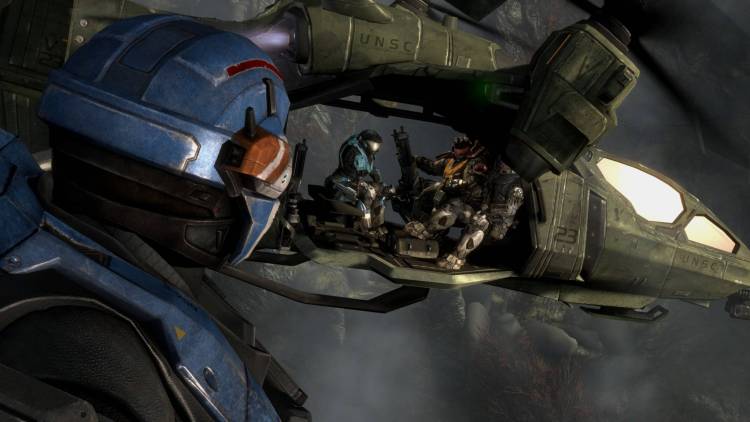 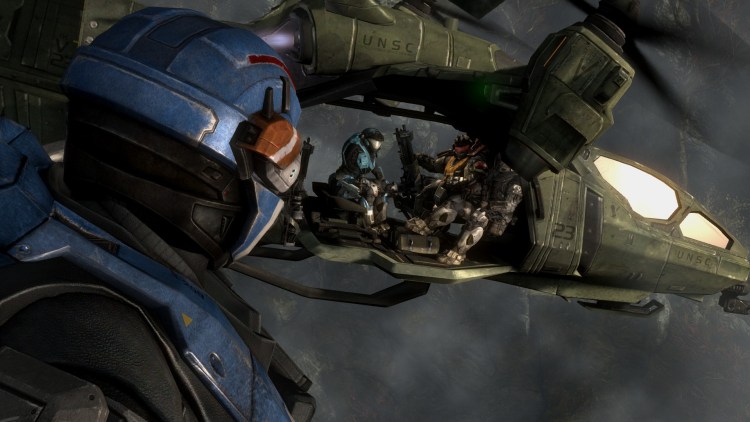 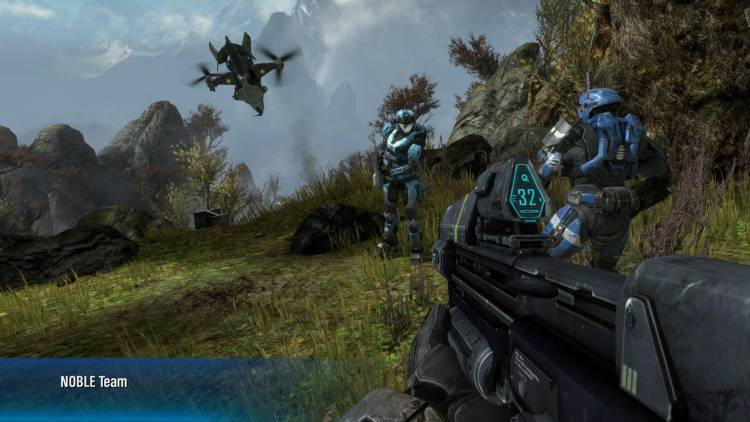 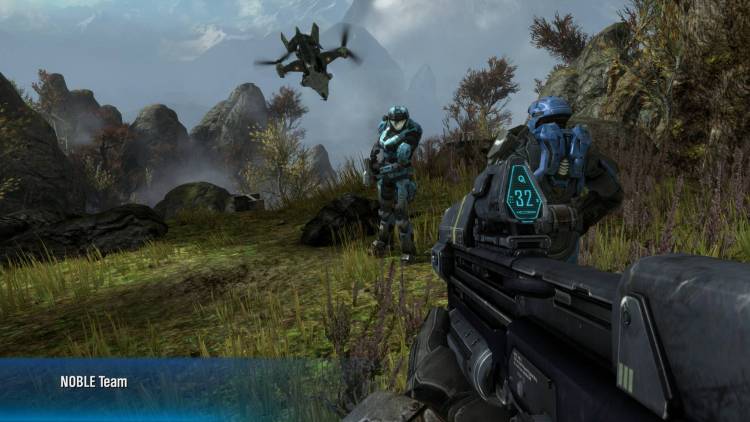 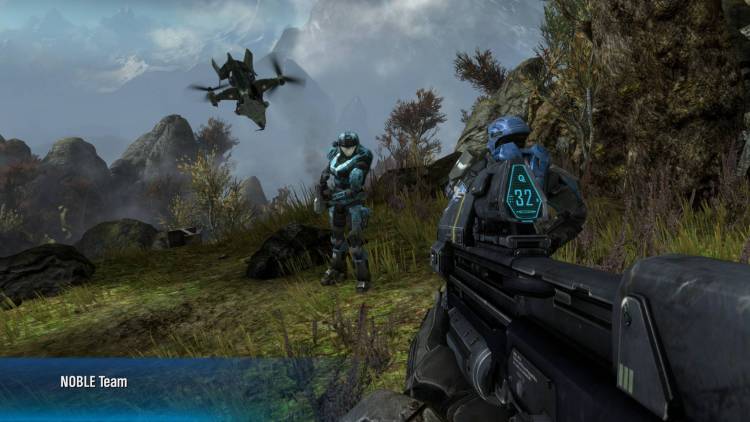 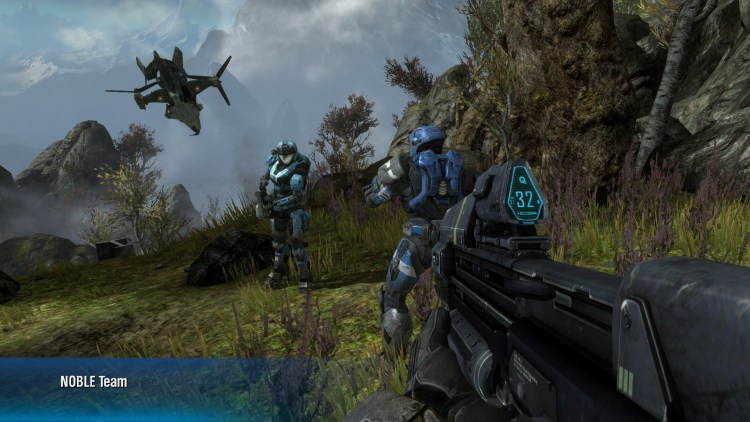 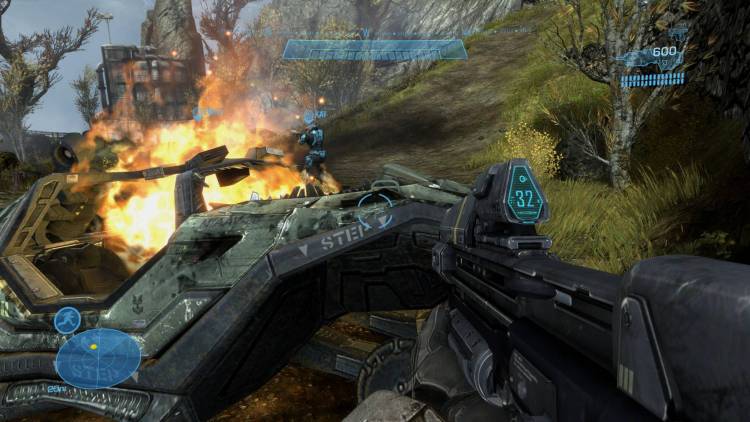 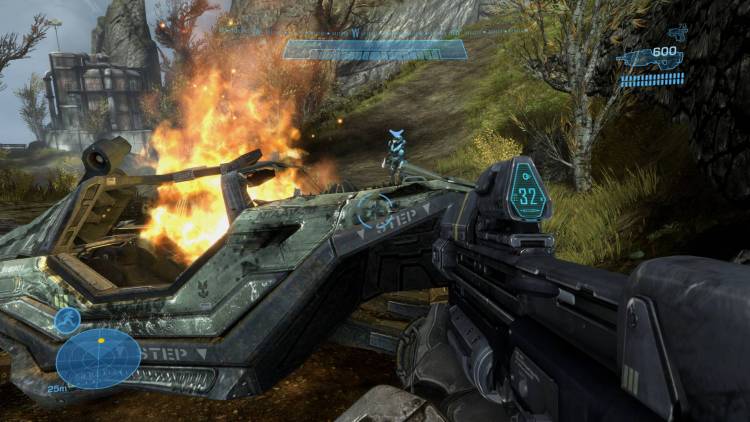 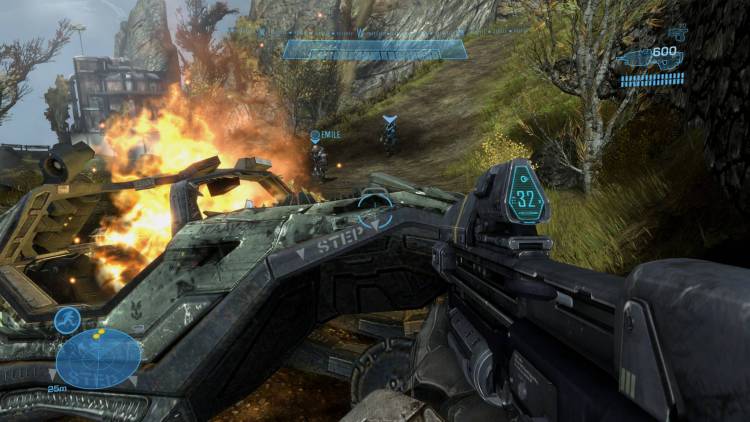 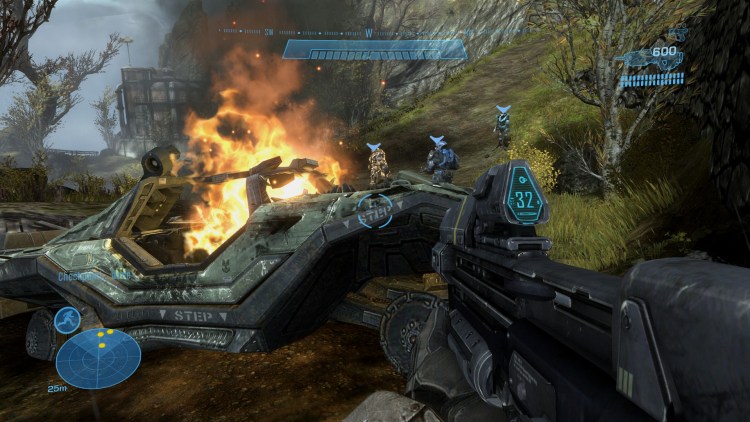 Halo: Reach, even when using the Enhanced preset in 4K UHD, looks slightly outdated. That doesn’t mean it looks terrible. Truth be told, a game that came out in 2010 would look like it’s not up to snuff compared to FPS titles in more recent years. You’ll notice jagged and sharper edges when lowering your graphics preset, with draw distance taking a hit, and 1080p resolution just doesn’t cut it anymore.

In terms of performance, this is where Halo: Reach excels with a couple of major caveats which I’ll get to later. Using 4K UHD resolution, Enhanced preset, unlimited framerates, and V-sync turned off, I was able to get over 120 FPS. Of course, if I lower the settings or downscale to 1080p, I’d see slight framerate bumps, but that’d be unnecessary. Getting 120+ FPS in shooters is more than enough. There are, of course, a few drops especially during hectic firefights. The good thing is that these framerate drops won’t be too egregious.

As for the major caveats, these would be screen tearing, animation, movement, and mouse controls. If I so much as use the unlimited framerates option (with V-sync disabled), I’d notice quite a bit of screen tearing going on. As for mouse controls, there’s something janky as well. The same can be said when it comes to movement and animations. I thought I was one of the few experiencing this until other Steam users posted about the problem. It’s as if animations and aiming aren’t smoothened out past 60 FPS, so anything above that would make the game look and feel weird.

Overall, while the game tells you that you’re getting 120-140 FPS or higher, something is still amiss. Other current-day FPS titles such as Destiny 2 don’t lead to the same issue, which is why this is perplexing to see in a remastered game from 2010. If you do want these issues resolved, it’s better to just enable V-sync and stick to the 60 FPS cap. This also means that you’re not experiencing one of Halo: Reach‘s touted new additions.

Here, you’ll see the control settings for a mouse and keyboard setup: 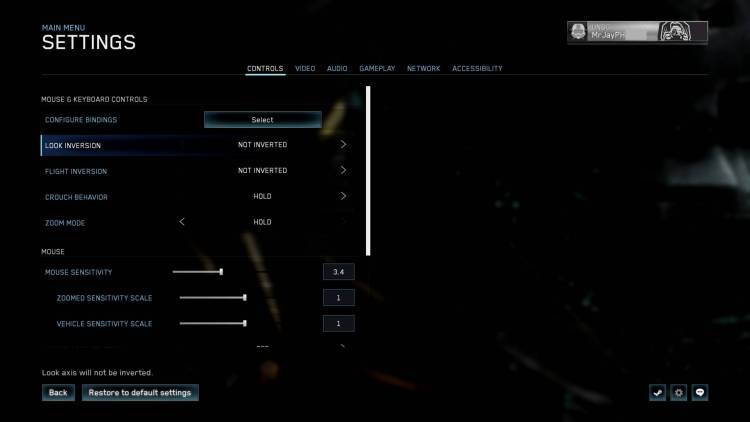 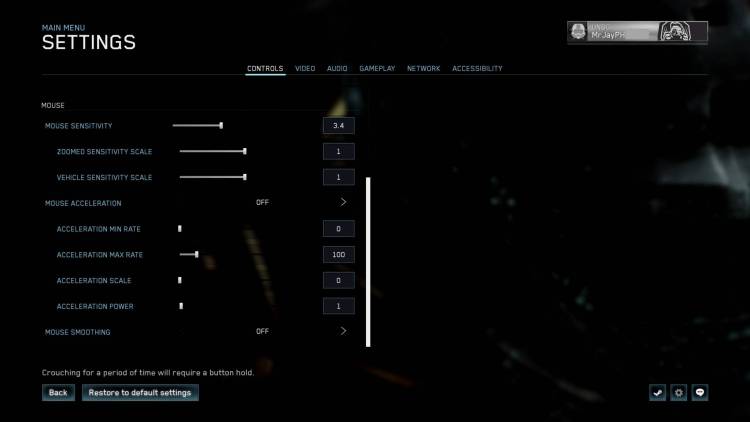 These are just some of the keybindings that you can change: 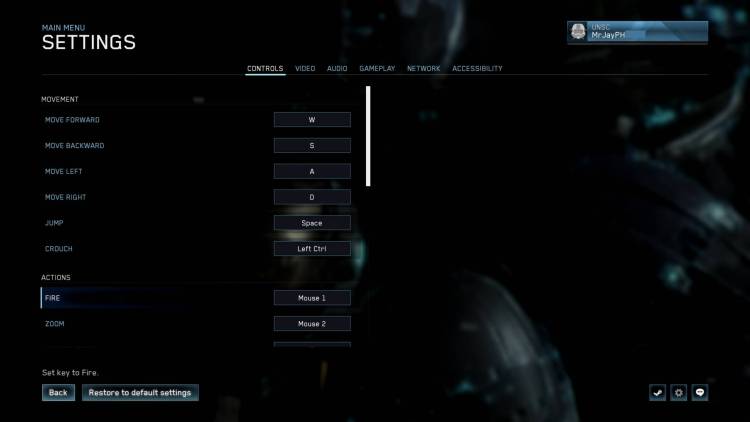 The funny thing here is that you won’t be able to change the keybindings for text chat (J) and push-to-talk (V). If you’ve gotten used to modern shooters that let you do that, then Halo: Reach would seem odd.

Here are the gamepad settings and the controller layouts: 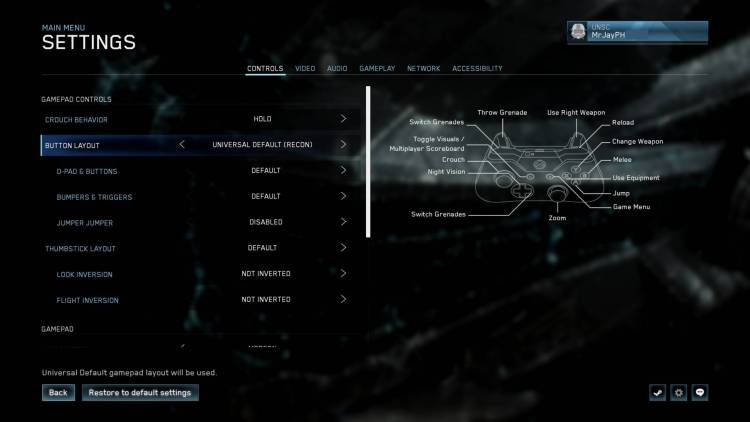 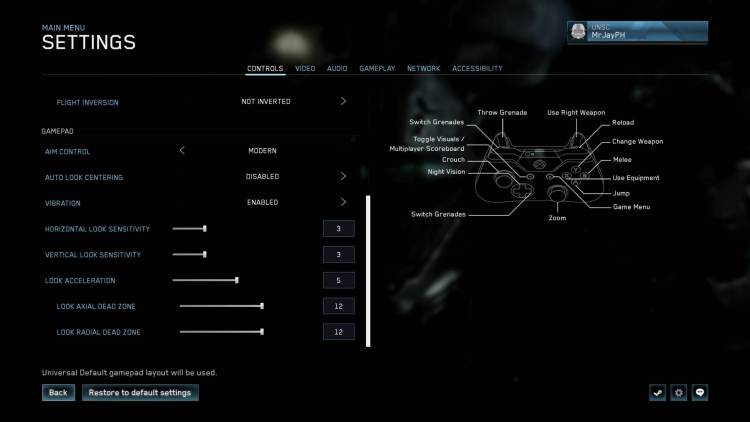 The controller presets will feel familiar to long-time Halo players. You’ve got options such as “Bumper Jumper,” “Zoom and Shoot,” “Recon,” and more. There’s also an additional option for aiming control. You can toggle that between “Classic, “which would make it feel as though you’re playing an old Halo game on the Xbox console, or “Modern,” where aiming would be more akin to current-day shooters.

I would advise using a gamepad for a first-person shooter if you’re playing on a PC. A mouse and keyboard setup is definitely more optimal. If you do want a layout that allows you to zoom in with the left trigger and fire with the right trigger, only the “Zoom and Shoot” preset lets you do that. Again, this is yet another oddity in Halo: Reach — to have but one preset that resembles today’s FPS games.

There aren’t that many settings for these three panels. Your gameplay options basically boil down to crosshair position and invite notifications. I guess checking Halo: Reach‘s credits also count. I’m surprised that there’s no means of further customizing or disabling your HUD layout herein. 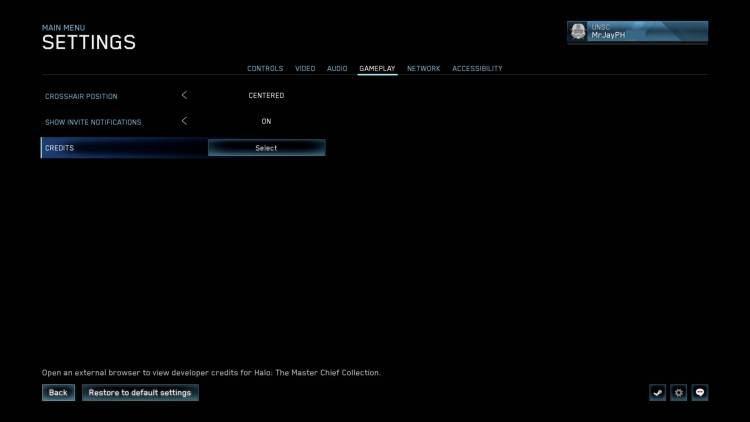 Halo Reach‘s network options provide a choice of picking Xbox Live or LAN. You probably aren’t doing LAN parties anytime soon and you’ll be playing online anyway, so just pick the former. Meanwhile, the relay setting masks your IP address from untrusted connections when turned on and unmasked when turned off.

On a personal note, it seems Halo: Reach relies on connection or region-based matchmaking. You’re unable to select a particular region you’d want to fall under. Since I’m from the Philippines, I ended up in the Southeast Asia queue. That won’t cause problems with latency, but it can take a while for some games to start if the player population is lacking. 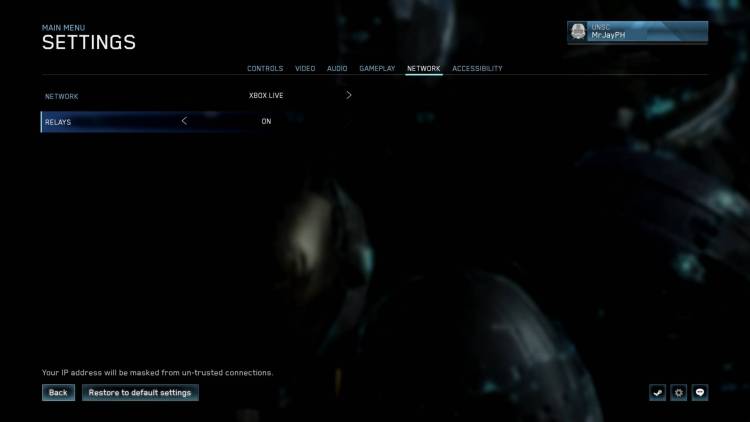 As for the accessibility settings, you can enable subtitles here as well as text-to-speech and speech-to-text. You can also change the game’s language from English to German, Spanish, Portuguese, Japanese, and several others. By the way, the subtitles only work for cutscenes. They don’t work for in-combat dialogue or squad banter. 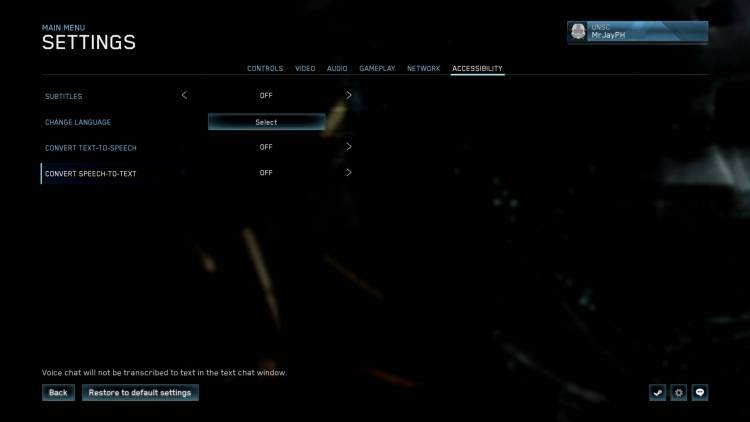 Audio settings or “In space, no one can hear this game”

Audio settings have to be discussed in detail since Halo: Reach (and the entire Halo franchise) predominantly hinges on delivering a multiplayer experience like no other. Knowing that communication is important, the odd choice here is that you’ve only got a smattering of options and not much else. In fact, the game is set to push-to-talk mode solely, and there doesn’t seem to be a way to disable that or change it to plain voice activity similar to Discord.

Another problem has to be addressed here, and that’s Halo: Reach currently has bugged audio. Even with the effects volume maxed out, guns will often feel muted or a lot quieter than all the other stuff going on. You don’t necessarily feel the impact or adrenaline rush of pulse-pounding gunfire and explosions because you’d hardly hear them over the soaring music or multiplayer commentary.

I’m hoping this gets fixed soon enough. The Halo franchise has been known for its soaring soundtracks and action-packed moments. Unfortunately, you’re not going to be fully immersed in the action if your Spartan soldiers and Covenant aliens sound like they’re all shooting BB guns at each other. 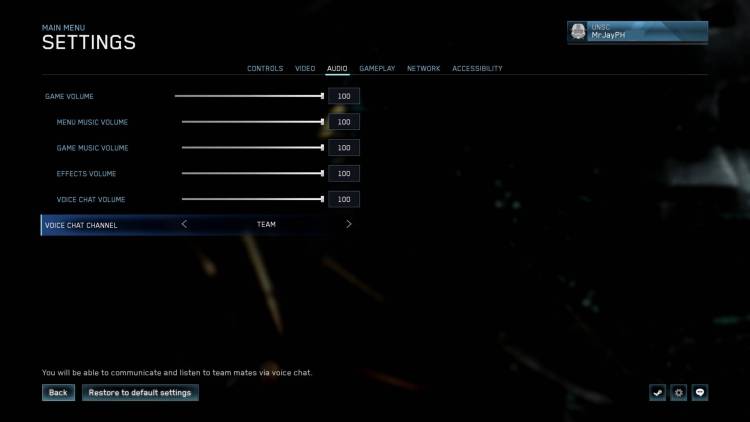 Halo: Reach isn’t quite reaching for the stars just yet

The use of graphics presets only, with no means of changing various options (motion blur, texture detail, post-processing, anti-aliasing, and others) will, no doubt, disappoint PC players. Likewise, the touted uncapped framerates can lead to screen tearing, very janky mouse scrolling, aiming, and movement animations. It’s much better to stick to a capped 60 FPS setting, but you’d be foregoing one of the remastered title’s features.

Perhaps the biggest flaw in Halo: Reach at the moment is the bugged audio. Gunfire, explosions, and other effects are too muted and hard to hear. It’s as though you’re running straight into the action, and yet it’s just a pantomime that’s playing before your eyes. Here’s to hoping that many of these problems do get fixed soon.

This isn’t just Halo: Reach‘s first foray into gaming PCs everywhere. As mentioned, it’s also the game that’d kickstart Halo: The Master Chief Collection, showing everyone what remastered versions of brilliant classics would be like. Sadly, from a technical standpoint alone, it seems Halo: Reach isn’t quite reaching for the stars just yet.

Halo: Reach is available via the Microsoft Windows Store and Steam. It’s also part of the Xbox Game Pass for PC. You can also check out our official review of how everything from the technical aspect, to the campaign and multiplayer, mesh together.