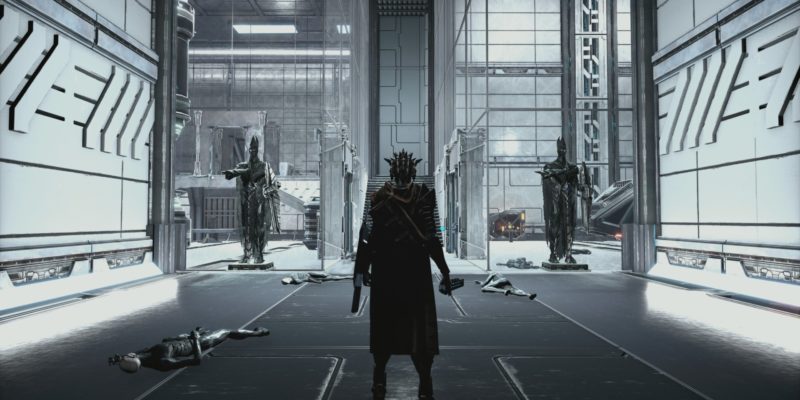 Hellpoint is a Souls-like game and, much like a number of titles in that subgenre, it’s also got a New Game+ mode. Getting there, however, is a doozy. As mentioned in our official review, it’s one of the most baffling designs because it requires the player to reach 100% data collected. Anyway, here’s our guide to help you out. Oh, and just to be clear, since we’re discussing finishing the game and starting a New Game+, there will be spoilers. 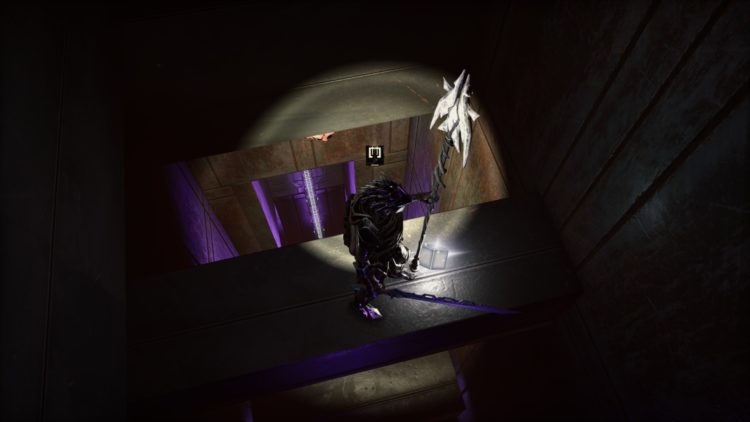 This was partially discussed in our Hellpoint Port Issoudun secrets guide, so feel free to read that as well. Basically, one of the areas (the Footbridge) leads you to a creepy spot with a terminal (the somewhat hidden spot that takes you there is seen above).

Once you reach the Port Issoudun terminal, you can input the code (72501). It’ll say that power has been rerouted to the High Ateliers zone. 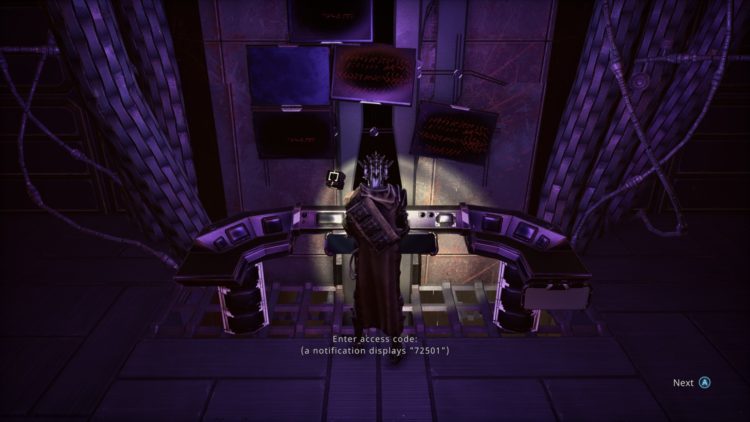 Anyway, a disembodied voice will tell you to return to the Embassy where you first met the Author. Go ahead and make your way back there (it’s where you fought the Banshee, Hellpoint‘s first mini-boss).

Head to the Embassy’s terminal next to the breach/save point. If you activate it, it’ll say that you’ve gathered 100% of the data. An elevator will then take you to the High Ateliers zone.

Note: Do remember that each of the game’s three main bosses will also net you 33% data collected if you want to rush things. 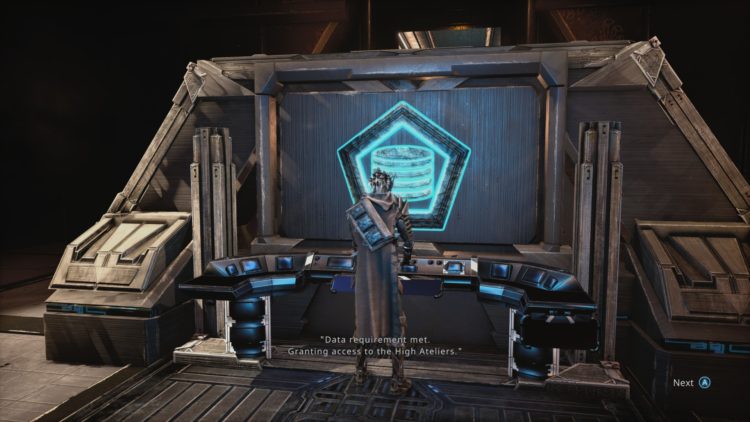 The High Ateliers zone looks like a futuristic laboratory. It’s also one of the smallest areas in Hellpoint.

Anyway, after saving your game, make your way inside the lab proper. There’s a locked door to your right (which we can open in a short while). 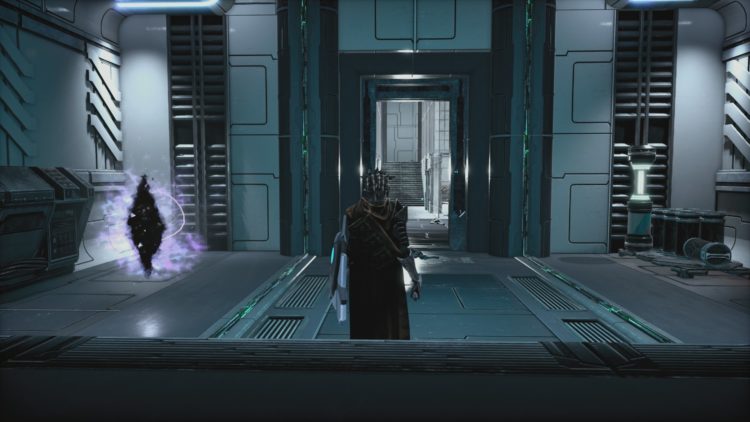 Go upstairs and fight your Ghost (it’ll spawn here in case you die). 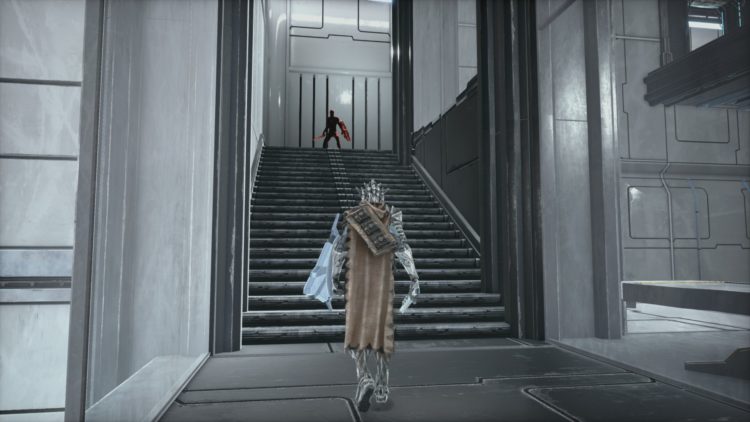 In the large chamber, you’ll find the High Ateliers key. This will open the nearby door as well as the lab room from earlier. Oh, and don’t forget to activate the panel since that connects the bridgeway to the boss. 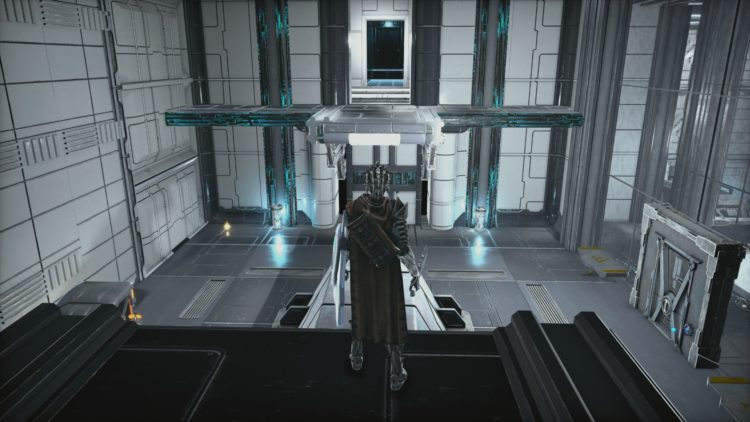 Unlock the small lab room from earlier and pick up the Artillery OTX. It’s a firearm that lobs explosives. 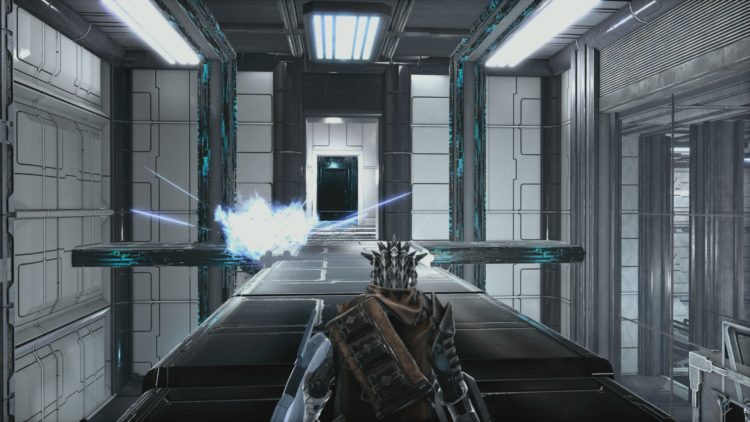 Head across the bridgeway and enter the secret boss’ chamber. Before I forget, you need to unequip some gear and make a running jump to reach the boss’ platform. Otherwise, you’ll probably just do the game’s stupid hop and fall down to your doom. 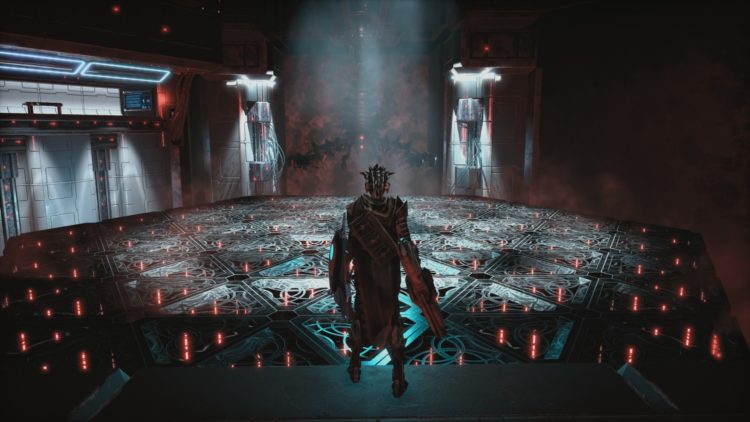 Talk to the Interface—Hellpoint‘s secret boss—and it’ll ask you to make a decision: give up all your collected data or fight back. I’m not sure what happens if you pick the former (it’ll probably loop you automatically for Hellpoint‘s New Game+ mode). In my case, I chose to fight back. 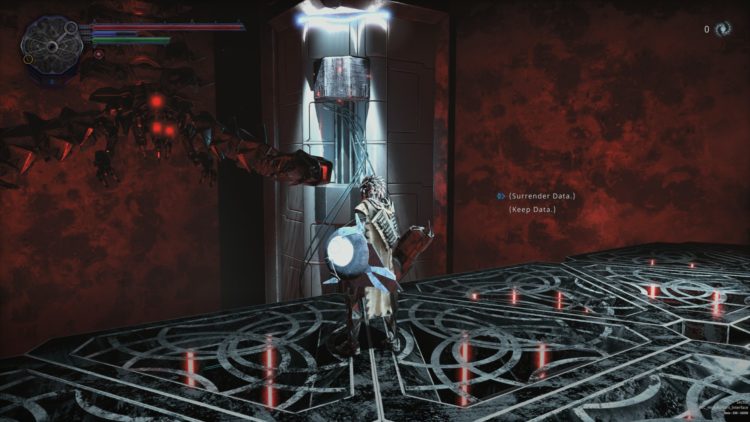 The Interface is a gigantic scorpion robot that fires missiles and lasers. Its projectiles can be blocked, but losing too much stamina will stagger you. It also has claws that it can use to swipe at you, and it can even dash across the room to bowl you over. 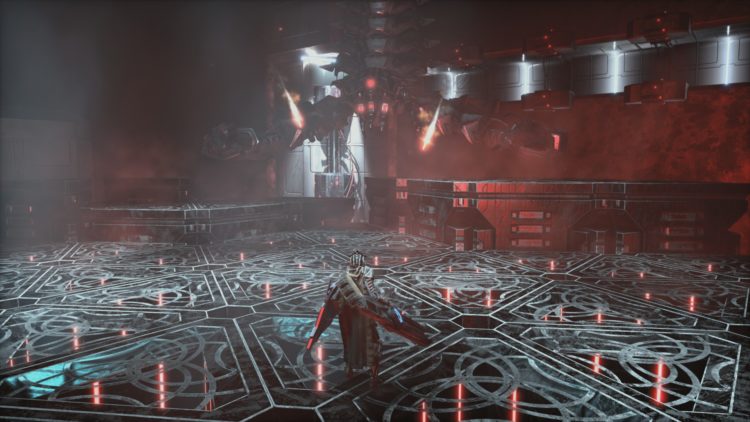 The goal here is to use your firearms (such as your newly acquired Artillery OTX) to make this thing go kaboom. Don’t forget that the platform’s panels will also slowly shift at intervals. There will be times when you’ll need to find a ledge to use for clambering up. 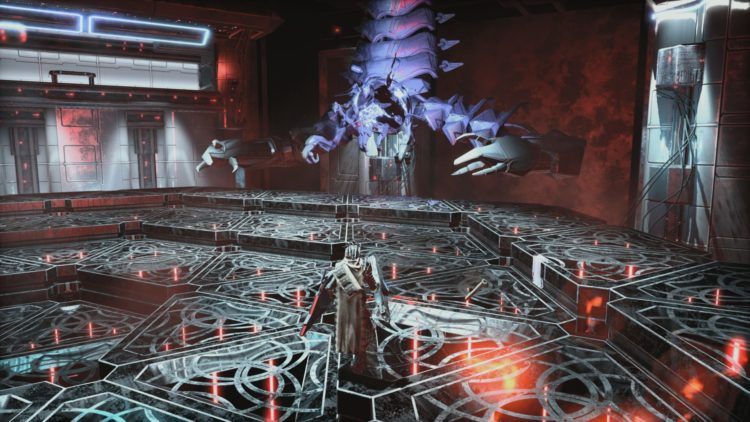 If you’re low on energy, you could get close to the boss to slash it a few times (preferably with fast melee weapons). Just remember to dodge roll to avoid its claws. Since you’ll be at the edge of the platform while meleeing, beware of the Interface’s missile attacks. Sometimes, it’ll fire a consecutive barrage of missiles that have a knock-back effect, pushing you off the platform entirely. 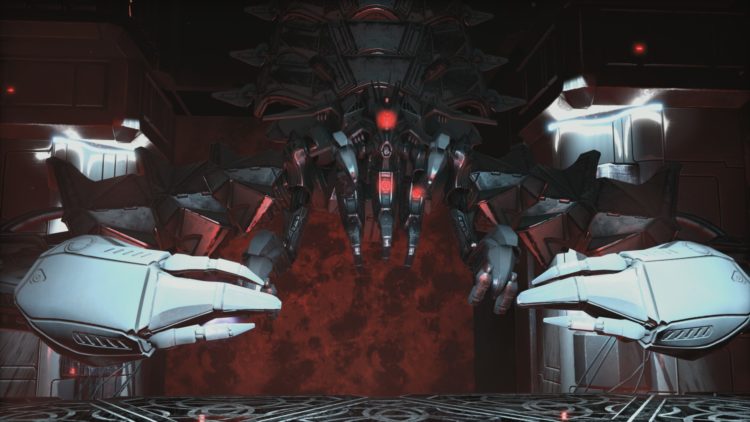 When the Interface is defeated, it’ll spawn a portal that your character automatically goes through. A “Thank you for playing” message and the game’s end credits will also appear. 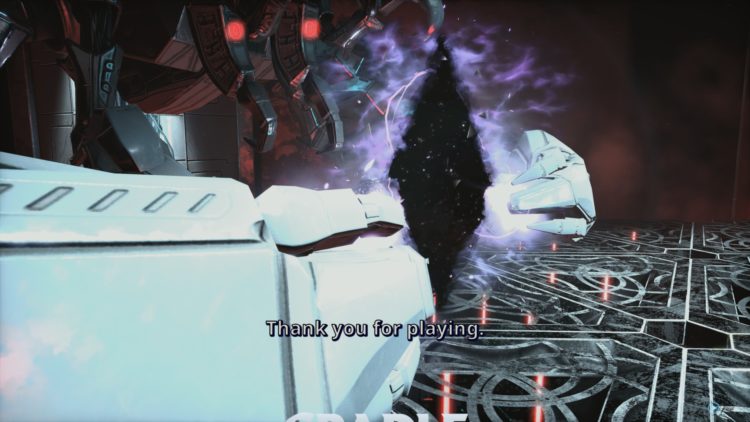 After skipping the end credits, Hellpoint‘s opening cutscene will play and you’ll find yourself back in the game’s first area. A mysterious figure will goad you into trying again. 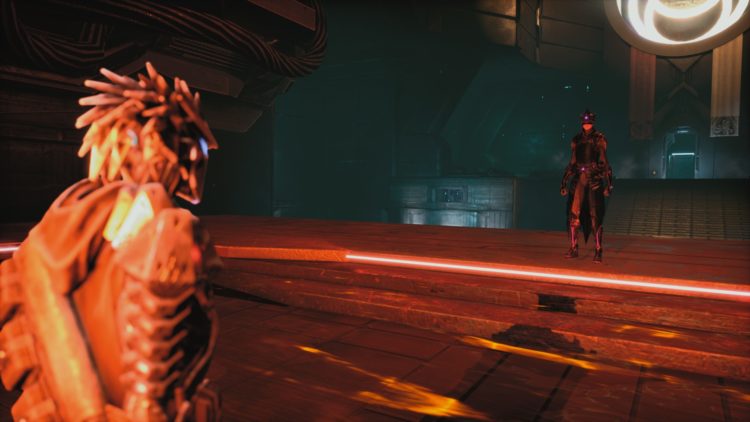 Since this is the New Game+ mode, you’ll have all the gear you’ve acquired in your previous playthrough. This will also include any item upgrades, stat boosts, and so on. You’ll also notice that all the loot has respawned (so you can go grab stuff once more).

So far, I haven’t really progressed further in Hellpoint‘s New Game+ mode. As cited in our official review, I was hardly impressed with the game and there were even some missing details or features that were never properly explained. Having another go at it, and probably trying to reach 100% completion again, did not interest me at all. Still, if you picked it up and you want to go back to adventuring on the Irid Novo, then you can go ahead and do just that. 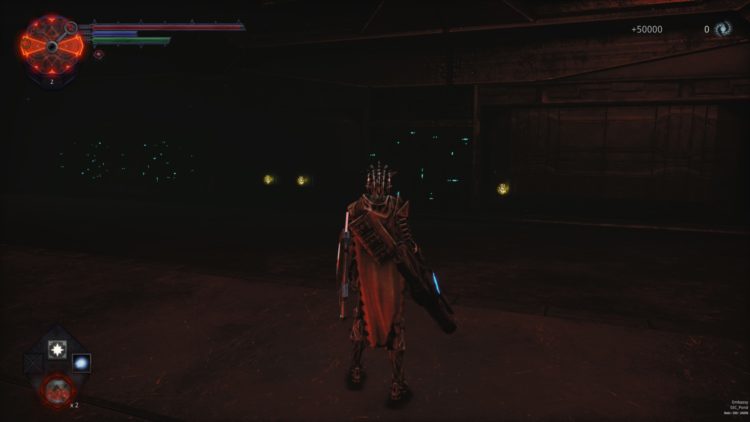 Update 1: I’ve just learned that the Interface isn’t actually Hellpoint‘s final boss. There’s actually another one that you need to beat to obtain the game’s “true ending.” However, that content seems to be bugged at the moment as it only leads you to an infinite loading screen. You can watch the video below from YouTuber Rubhen925 while taking note of the comments and description:

The true final boss is glitched and won’t appear and the devs are working on a patch atm sadly.

Kind of annoyed because I have access to the final area but it wont load. Got to wait till a patch comes out fixing it….

Thats the true ending path. But the game is broken. When trying to access that ending you get endless loading lol. Got to wait for a patch