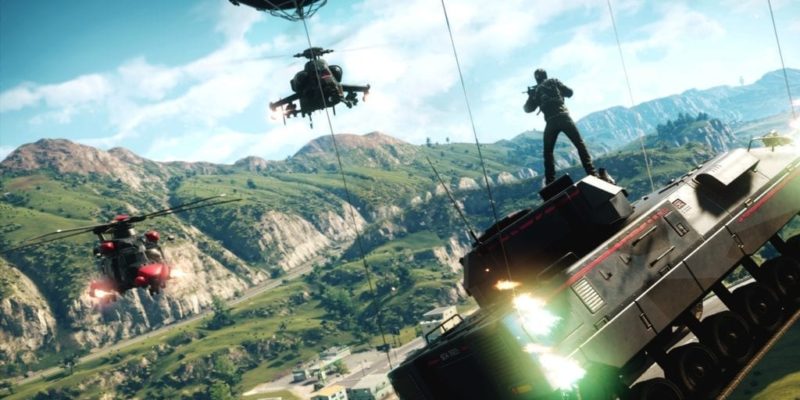 If Just Cause 4 itself didn’t give me too many surprises, its technical aspects on PC certainly did. I expected something that would utterly devour my computer and limp along at a low framerate, but instead, it winks at the camera and swoops along with a flourish. On the other hand, there are some aspects of it that don’t do nearly so well, and those hamper its PC technical credentials more than a little.

Let’s have an in-depth look, shall we? 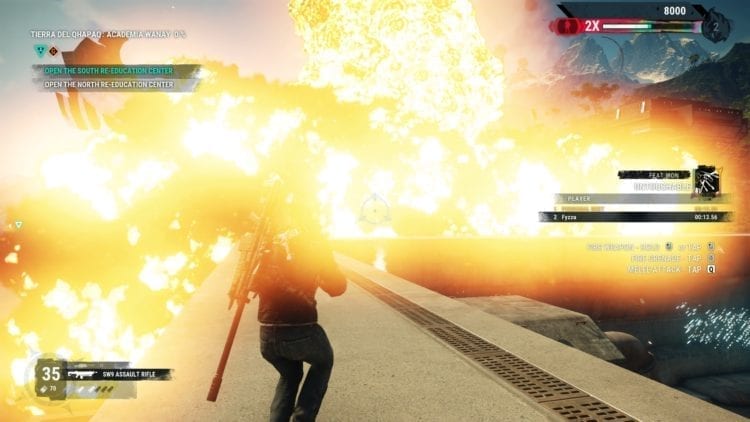 I always like to kick things off with a bang.

I’m not going to lie: those Just Cause 4 system specs terrified me. When the recommended specs include a GeForce 1070 and a processor that’s slightly in advance of my own, I fully expect things to move like a nailed-down sloth when I’m running things at 2560×1440. After all, most recommended specs are aimed at 1080p gaming, and it’s rare to see a high-end GeForce as a “recommended” card.

And yet, that’s not quite what happened. We’ll get onto specifics when we talk about comparisons, but Just Cause 4 ran better than plenty of other games with lower recommended specs.

As is tradition, we’ll start off by looking at the options. Graphics, first: 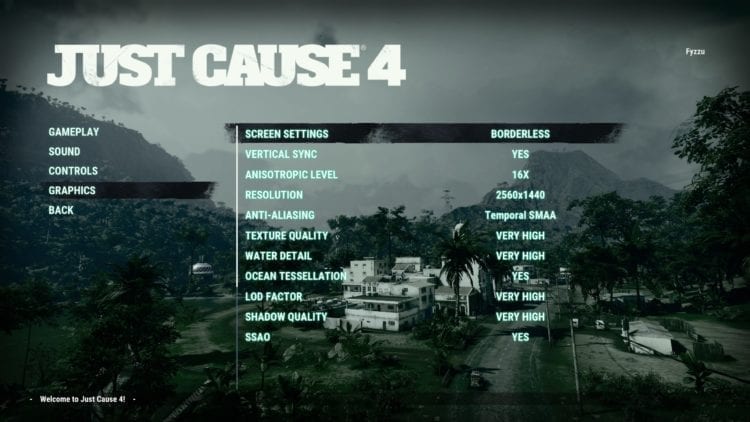 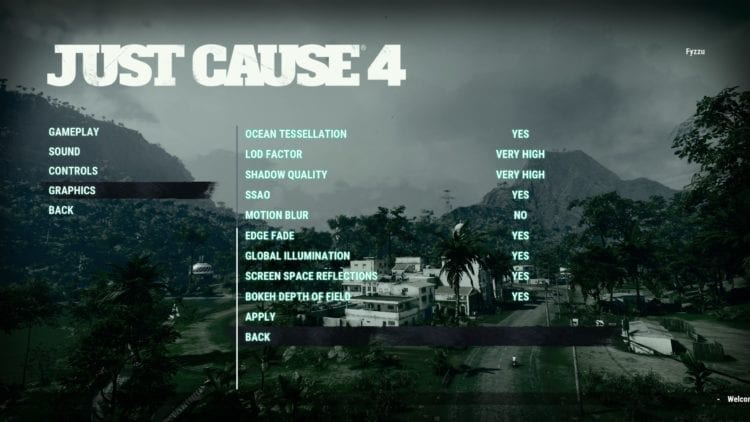 All in all, a pretty good set of options. Motion Blur is something that every game should allow you to disable because it is effectively the devil, and the rest of the scalability is pretty bloomin’ decent too.

The other options aren’t quite so spectacular, mostly being what you’d usually expect (mouse sensitivity, subtitles, various audio levels). But I do want to quickly highlight the controls: 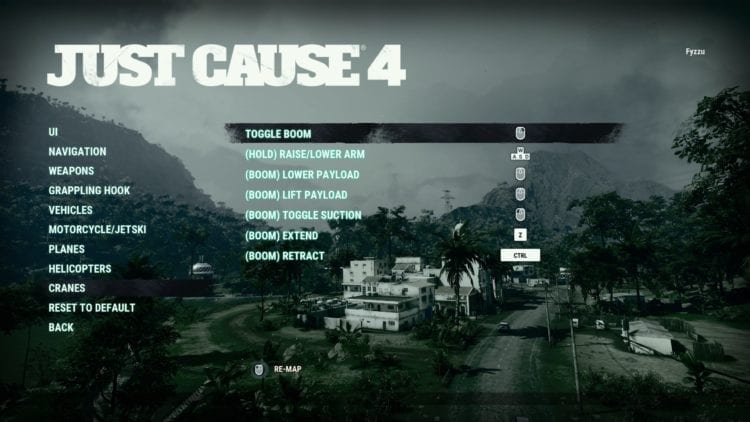 Yes, there is a specific section in the controls for cranes. I love this series.

“But Tim,” you cry, “even if it’s more scalable than a tiny hillock, how does it look?” Don’t worry, voice in my head! I have you covered due to the magic of comparison screenshots. 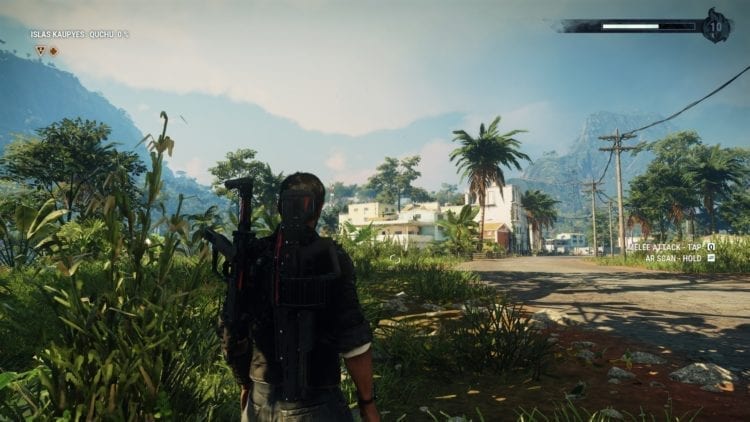 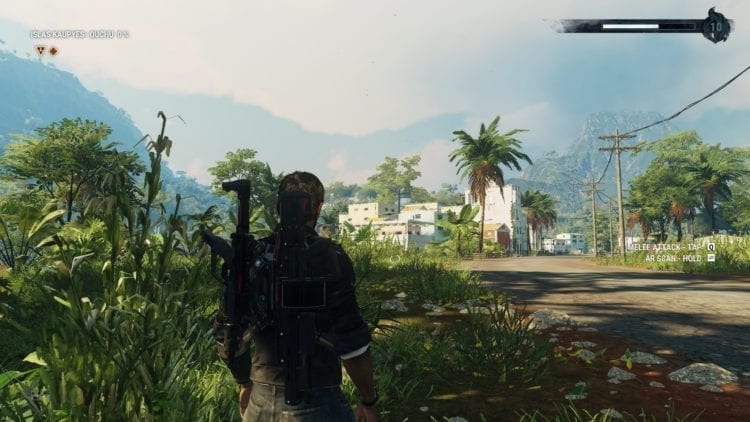 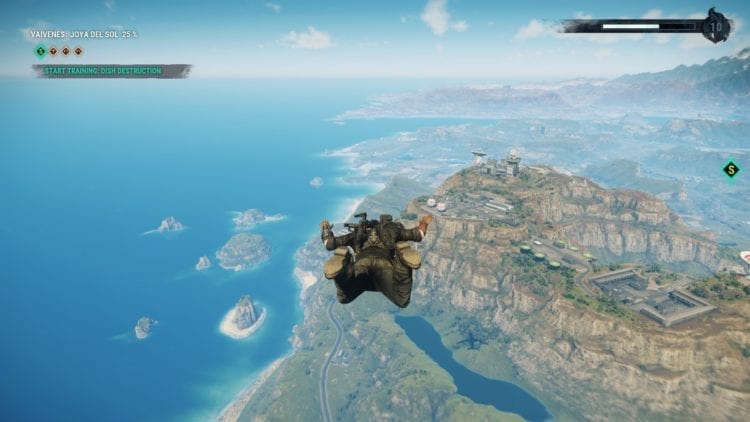 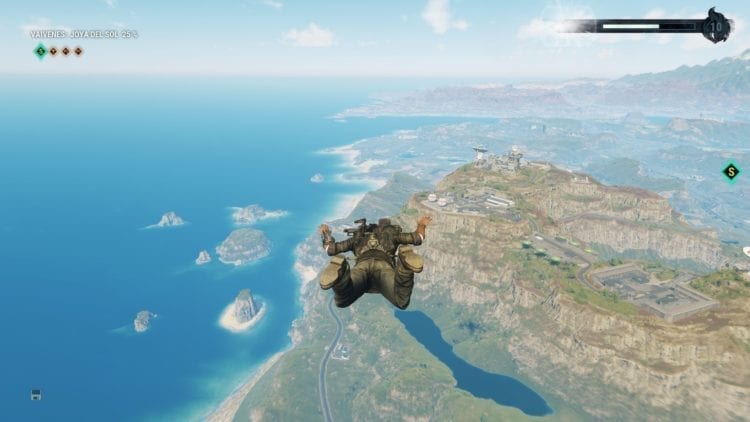 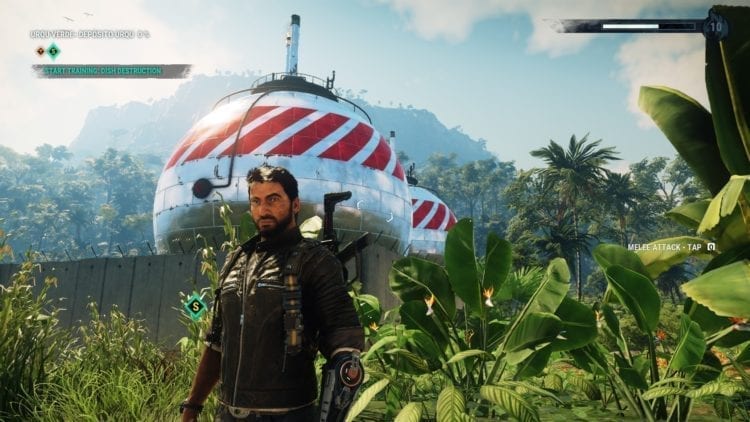 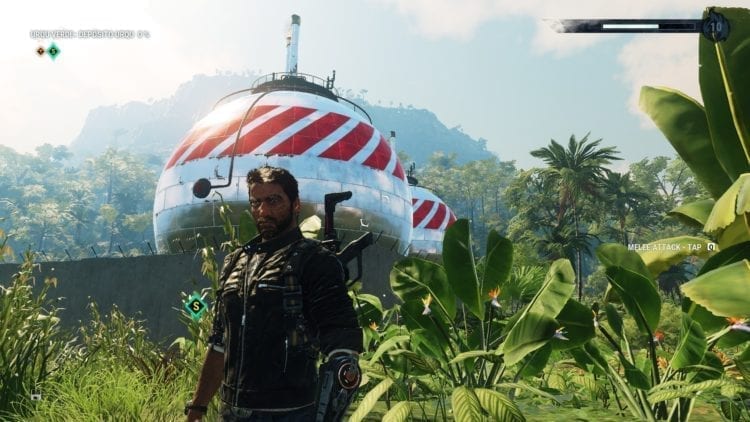 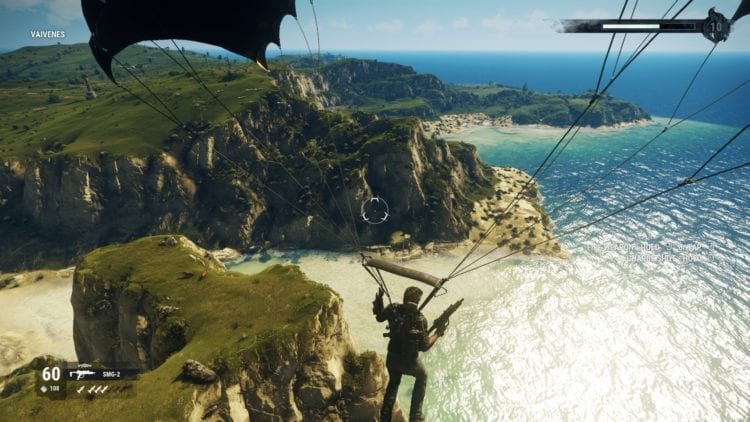 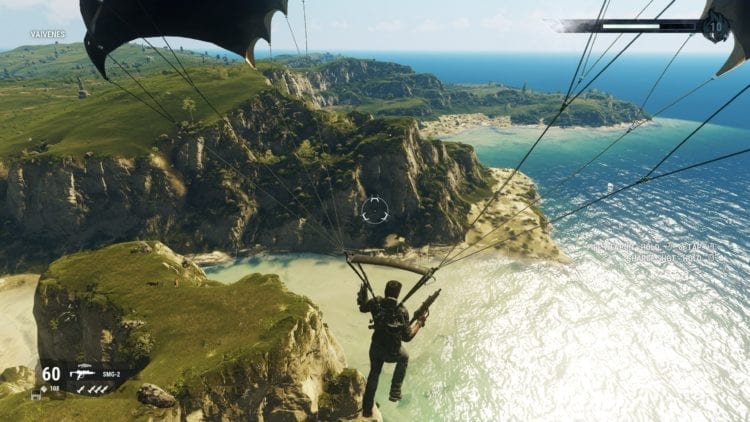 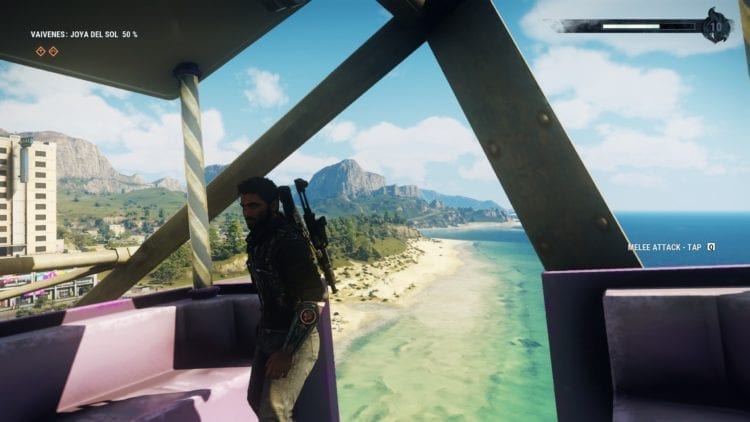 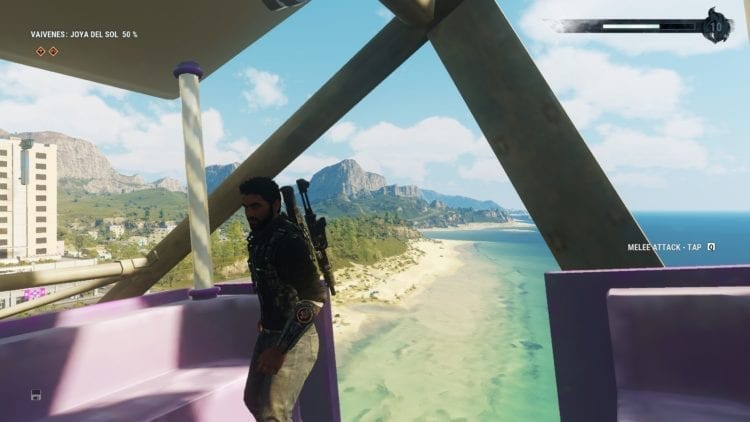 Differences are very, very noticeable, but Just Cause 4 looks pretty lovely either way. One thing I will say I barely noticed until right now was the vignetting caused by the Edge Fade option, so here’s a quick extra comparison shot between everything turned on and everything turned off, but with Edge Fade disabled for both. 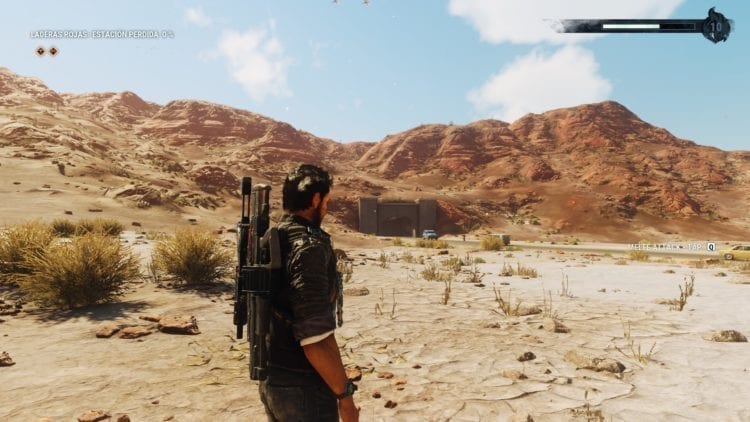 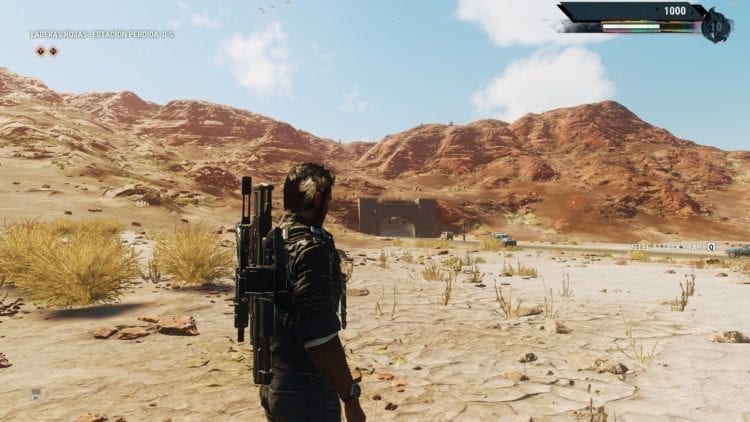 Despite it looking pretty lovely either way, there’s definitely an emphasis on making everything look nice at a distance rather than close up. Close-up textures aren’t great across the board, and while vistas tend to be spectacular, there are a few quirks when it comes to stuff that’s nearby. Character hair, in particular, is something that just looks very wrong throughout. Just look at that close-up of Rico’s face, especially in low detail.

You also can’t see some of the slightly odder visual effects in these screenshots. No matter the LOD Factor (which I’m assuming is the relevant option here), it’s very easy to see details changing at a distance as you wingsuit over the landscapes. Grass and other purely visual bits of the environment fade in and out as you get nearer, being replaced by higher-quality stuff, and it looks almost like a wave racing ahead of you, gradually changing the details. There’s also some really odd stuff that seems like frame interpolation: it mostly crops up in the in-game cutscenes, but it can make walking characters look almost like they’re vibrating. Vsync may fix this, but you can also see it in an in-game scene below. 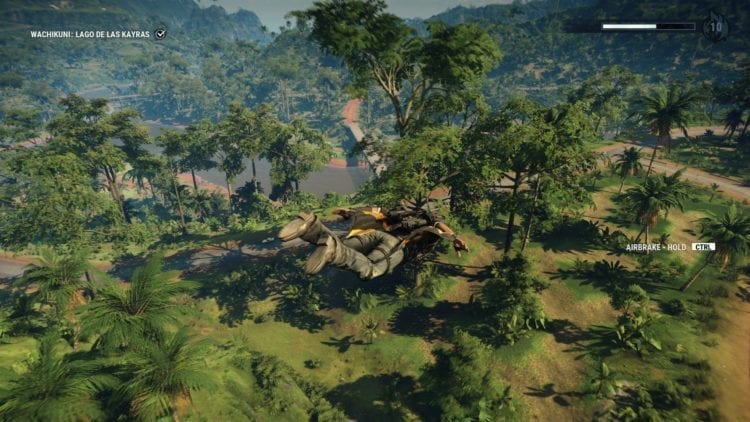 You can see the weird, almost interpolated look on the trees in the lower left.

But performance wise? Stunning, honestly. On the lowest settings, I’m sitting anywhere between 90 and 120FPS; on highest, between 60 and 90. The screens above where I’m wingsuiting over things were at 90 FPS on full graphical detail, and even up-close with dozens of enemies and explosions going on, I think the lowest I ever hit was about 50 FPS. And that was a second or two of mild stuttering, rather than a constant problem.

On the one hand, you can say that a 30 FPS drop is pretty huge. Personally, though, if something is running at over 60 FPS, I don’t tend to notice performance drops. 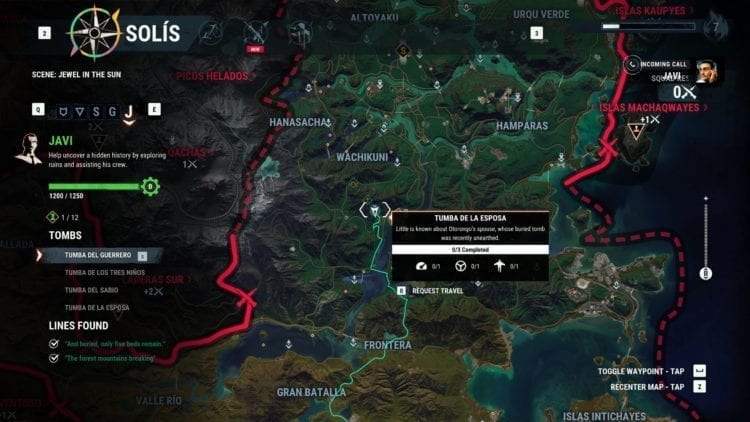 The map is the bane of my existence.

Just Cause 4 controls just fine on mouse and keyboard, except for one area: the general user interface. Surprisingly, despite a lot of the game’s tech clearly being built for PC, the menus and maps are definitely built for gamepads.

All of the keybinds for these are redefinable, but I still haven’t really found a comfortable way of setting things up. Clicking and dragging to move the map often results in an accidental click on one of the buttons at the top of the screen. Hitting 1 to open the map and associated menus feels bizarre, and the same goes for using 2 and 3 to move between tabs. Likewise, even the options menus above demand a weird hybrid of mouse and keyboard to control: you pretty much have to use the keyboard to scroll down through options, but the selected option always defaults to whatever the mouse cursor is on.

In gameplay, though, it’s all good. Some of the controls take some getting used to for newcomers to Just Cause – right-click is used for your grapple and tethers rather than for aiming, for instance – but these quirks are understandable considering the game’s focus. And, again, you can redefine them if you really want to. After 30 minutes or so, I didn’t feel the need to do so. 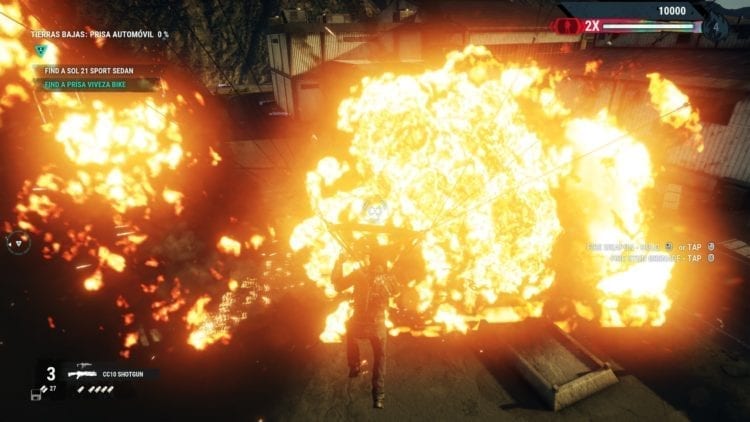 More explosions? More explosions. Worth noting that, while it’s very hard to grab comparison screenshots of these, they do look lovely on any setting.

Something that bears mentioning is that the code I’m working with is pre-final. Putting aside the fact that we’ll almost certainly see Nvidia drivers popping up to improve performance, there are a couple of specific things noted as being unfinished in the review build.

I’m going to mention them anyway, for two reasons. First: they may have an impact on the above visuals and some of the things I commented on. Second: they may have been fixed in one of the patches to the review build that popped up, or they may be a day-one patch thing.

For starters, there are apparently some issues with Anisotropic filtering and Bokeh depth of field, and that might impact performance or visual fidelity. Secondly – and more importantly – cutscenes in this version are apparently work-in-progress. I’m not sure what this specifically means, but I’m hoping it means that the video cutscenes are placeholders.

Right now, at least, the video cutscenes are recorded in-engine, but it looks kinda like they were recorded at 720p and then upscaled to fit my monitor. I’m hopeful that Avalanche Studios will replace them with proper in-game cutscenes, or that they’ll make higher-res versions available come launch. I’ll update this when launch happens and I have an idea whether this is intended or not. 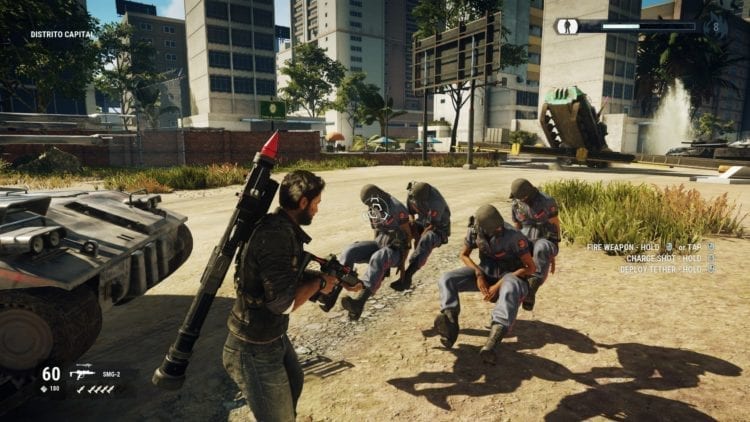 Bug of the year, if only because of how abusable this is with the physics system and tethering.

On a similar note, I want to bring up bugs, because I’ve hit a few. None are major or impactful on gameplay; indeed, considering the game’s incredibly silly take on everything, I’m actually quite charmed whenever one happens.

Sadly, suicidal AI pilots were fixed, but there are still a few bugs around. I’m pretty sure a tree spawned in the middle of a road at one point (or perhaps it got knocked there and was somehow standing straight up). Personal favorite goes to a destroyed enemy jeep despawning, but the four corpses inside remaining, in a seated position, perpetually fixed in place. The fun I had with those and air lifter balloons is the sort of thing you’d expect from Garry’s Mod. So no: nothing serious, and indeed, they tended to add to the anarchic fun. 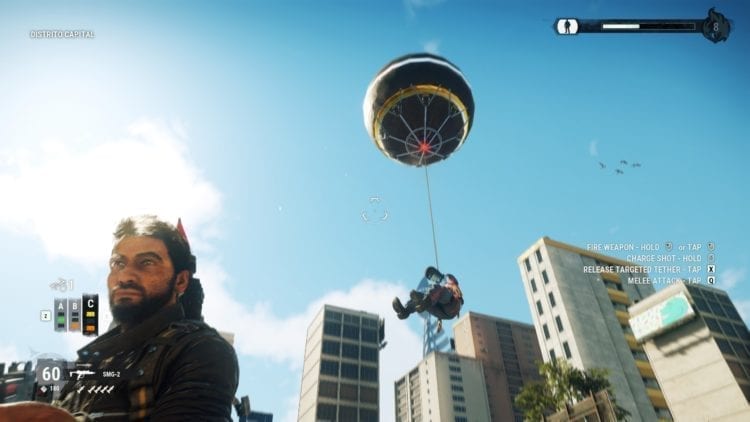 Technically speaking, the PC version of Just Cause 4 appears to be pretty spectacular. There are a few visual issues and a few UI blips, but it runs a lot better than I expected it to and is plenty scalable. It’s one of those weird occasions when the technical aspects of the port are really, really good, and it controls just fine, while it’s the more “minor” things like the menus that let it down.

For our full thoughts on Just Cause 4 as a game, click on through to our review.