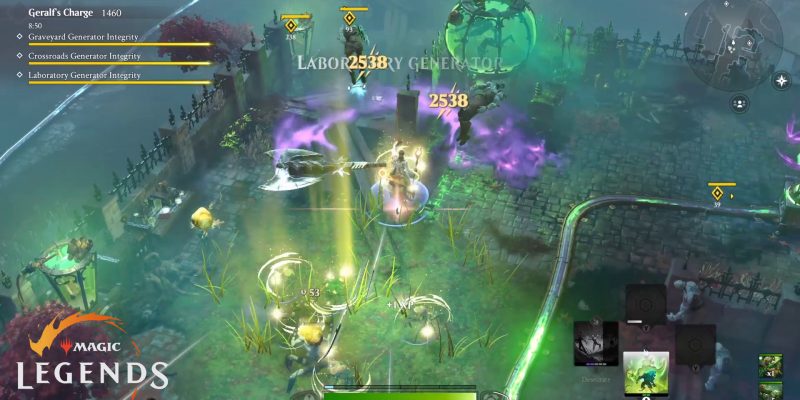 I’ve been struggling to work out exactly what Magic: Legends is. The game was originally pitched as an MMO, but more recently I’ve seen it described as an online action RPG. I’m a big fan of both genres; I’d just like to know what I’m getting into before I begin. So, I was very thankful for the invite to preview Magic: Legends ahead of its Open Beta release on March 23 and ask some of my burning questions.

To get the biggest question out of the way first, Magic: Legends is a hybrid between an MMO and an online action RPG. Hence the confusion. If you’re looking for a World of Warcraft or Final Fantasy XIV­-type experience, this isn’t going to be it. It’s a lot more like Diablo III, with elements of an open world where you can show off your cosmetics and encounter up to five other players.

I didn’t get to experience the more social side of Magic: Legends during the preview. It was just me being watched over by the game’s lead designer, Adam Hetenyi. Plus, we were far too busy summoning hordes of minions and tearing apart enemies with beautifully lethal-looking sorceries. I was told that you will be able to party with up to two other players and partake in 1v1 duels.

Charged with a mission

In the preview, I got to play two types of missions. The first was a linear quest through the lush jungles of Tazeem. The second was a point defense in the much darker zone of Gavony. I particularly enjoyed the dense jungle region in Tazeem. It was bright, teeming with life, and gave off the distinct sense that old powers were hidden beneath the immense canopy. 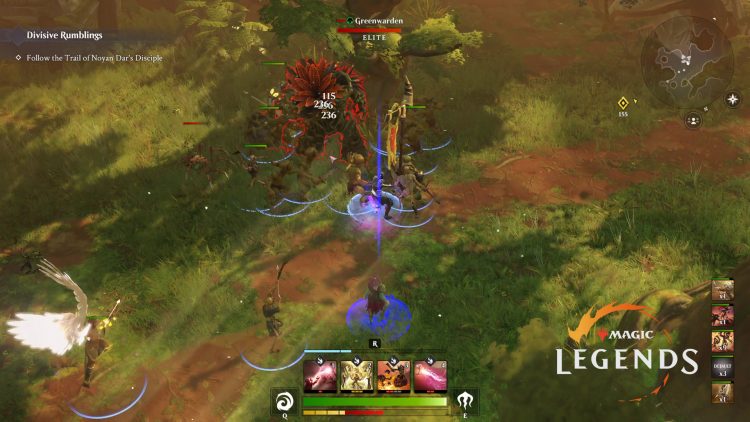 The jungles of Tazeem and the hordes of allies you can summon.

There was a vast difference between the two, with missions that offered a solid first taste of the variety of gameplay you’re in for with Magic: Legends. The linear story of the first mission in Tazeem was easy to follow. It helped draw me into the story playing out in the region and introduced me to some of the characters you’ll encounter.

On the other hand, the point control of the Gavony mission was chaotic. It was a little overwhelming for a brand-new Planeswalker trying to solo a quest that required me to defend three points. Don’t get me wrong, the chaos was fun. But it would have been a lot more manageable with a couple of friends. I missed some of the finer points of the narrative because I was too busy trying to prevent the three soul batteries from getting destroyed.

The power of the cards

In Magic: Legends, your power comes from your cards. There are other things for you to collect and empower, but your cards are literally the abilities you wield in combat. Without those, you’ve got nothing. I was given two decks to try out during the preview, each with a clearly distinct build and strategy. 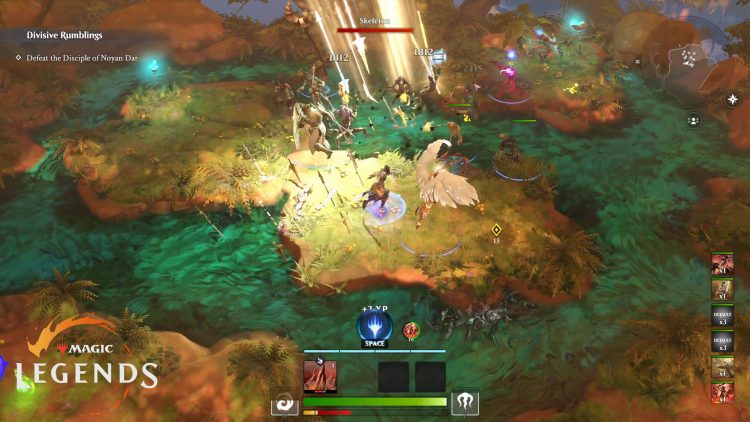 The first deck used Red and White mana, relying on summoning and buffing minions. My second was a Black and Green mana deck that had a couple of big creatures and a lot of ghastly looking attack sorceries. The two decks played very differently, of course. With the summoning-focused deck, I felt like I was unstoppable. All I had to do was keep my minions alive and they would rampage over almost everything. With the second deck, I was a lot more active, focusing where I cast my spells.

I enjoyed the second playstyle a lot more. Summoning minions seems a little overpowered. However, Hetenyi told me that some of the most impactful builds he has seen are heavily focused on damage-dealing sorceries. It’s up to you to define the style that’s fun for you.

The gameplay loop involves making quick decisions about which spells to cast (based on the cards you have in your hand), managing your mana, and moving around the battle to attack enemies and avoid their abilities. Your deck has 12 cards, but you only have access to four of them at a time. The world will supply you with unique mechanics on top of this loop to add extra challenges and keep gameplay fresh.

Each class in Magic: Legends brings a few unique skills to the battle. You can swap classes as easily as you can rebuild your deck, changing things up to suit your build and playstyle.

The class you choose will determine your auto-attack: melee or ranged. Each class also has two unique skills and an ultimate ability. In the Magic: Legends preview event, I was playing as the Necromancer while wielding the Red and White mana summoning deck. The Necromancer had a medium-ranged primary attack. Its secondary power creates an explosion and summons skeletons to your side. As you can imagine, this suited the minion-based deck design very well. I sat behind my minions and slapped enemies while my creatures swarmed over them.

I could choose which class I wanted to play for the second mission, and I opted for the Geomancer. I love raw elemental power, and this class has that in abundance. The Geomancer is a melee class, with the ability to leap at your foes and hit them earth and fire. The deck I was using with the Geomancer was more focused on damage-dealing sorceries. So, I ran (like a bit of a headless chicken) between the points I was securing, diving into the faces of my enemies and throwing out deadly magic. It was very satisfying. 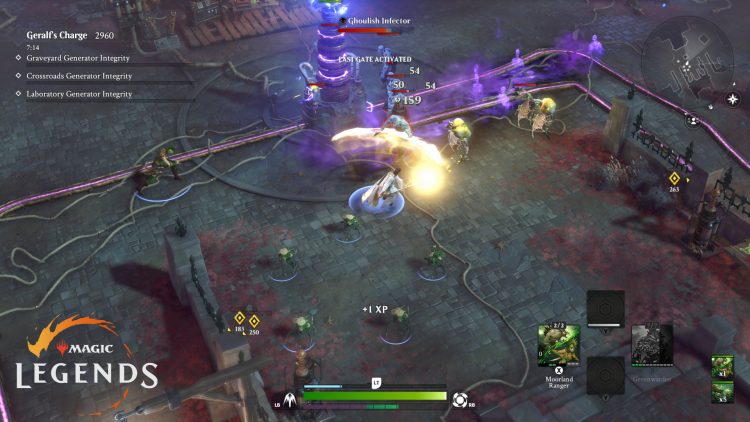 The Sanctifier class using the Green and Black mana deck from the Magic: Legends preview.

The class you choose definitely impacts the way you play — based on its primary attack and unique abilities. However, I don’t think it will be nearly as important as the deck you build. Still, it’s nice to be able to change class to suit your mood or support your deck.

Think before you act

Gameplay in Magic: Legends is twofold. Crafting your build is step one and will feel like you’re building a deck in Magic: The Gathering. You can imagine synergies and theorycraft different combinations. And I don’t just mean with your deck. A build consists of five elements: equipment, artifacts, your class, traits, and your deck. Once you’ve got something to test, you’ll move onto the action RPG element of Magic: Legends. That’s where you pilot the deck you’ve designed. In the words of Hetenyi, “it’s two different kinds of fun.”

As long as you’re not in the middle of a mission, you’ll be able to completely change your loadout. So, it’s easy to craft and test your builds. Magic: Legends is more focused on the exploration of decks and builds than the exploration of an open world. My one concern about the game right now is that the world will be too rigid. But, as I mentioned, I didn’t experience the social side of the game at all. 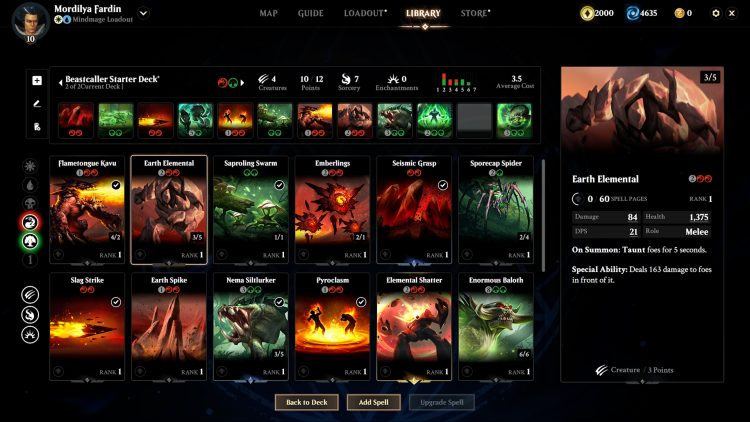 There are so many cards to choose from, as well as the other elements that make up your build. Variety is definitely on the cards.

Magic: Legends goes into open beta on March 23. According to Hetenyi, the beta will run until the full launch of the game. When the game does get a full release, all your progress will be carried over from the beta. Plus, there will be no save wipes. Hetenyi also assured me that Magic: Legends will be balanced regularly.

Magic: Legends will be free-to-play. Of course, this begs the question: how will it make money? The game will have a battle pass-type system, where players can purchase booster packs – much like in a trading card game. But none of these systems will allow you to pay to be more powerful than free-to-play players. You can pay for convenience and cosmetics, but not ultimate power. Hetenyi mentioned that any equipment, cards, and cosmetics that players buy with real-world money can be acquired by others through the Currency Exchange and Broker systems.

I’m a fan of action RPGs. I also enjoy the theorycrafting of trading card games. My short experience in the Magic: Legends preview gave me hope that Cryptic has done a solid job striking a balance between these two genres. I’m excited to see what other types of missions Magic: Legends has in store. And I can’t wait to try out new spells and push my builds to their limits.