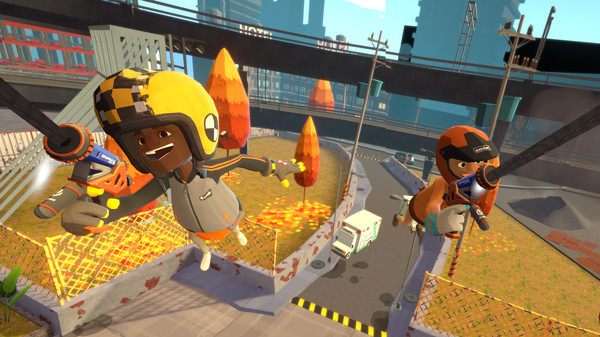 Get your fire extinguishers ready, because the multiplayer game Embr got an official release date, and it’s coming fairly soon. Developed by Muse Games (who previously developed Hamsterdam) and published by Curve Digital (who’s published games like Thomas Was Alone), Embr is a game about fighting the fiery flames with your friends.

Embr is a funky cooperative game with first-person shooter elements, where you dive into burning houses and become the hero of the hour. Extinguishing fires with your friends is one thing, but you’re also expected to rescue some colorful clients, who are often quite busy on the toilet or taking selfies in front of the flames. These are certainly no ordinary firefighters, where “everyone from the paperboy to Gram” can come rescue you from a fire. And you can become one of them.

You can play Embr with up to four people, and the difficulty increases based on that number of players. While you’re out fighting fires and saving lives (if chucking citizens out open windows counts as rescuing them), you’ll also make some money that you can spend on upgrades and new tools. There will be 25 unique levels on launch, filled with different traps and hazards you’ll have to navigate through. There are multiple ways to clear a level, so you can mess around to find the best way that works for you.

There’s great potential for replayability here, too. With tons of achievements, unlockables, and missions, there are tons of reasons to check back in with your friends. Not to mention, Embr will have cross-play support, so you can march through the fire and flames with your console friends as well.

Embr has a release date for September 23. You can access the Early Access period by purchasing the game now through Steam for $19.99 USD. Meanwhile, you can check out the newly released gameplay trailer below: