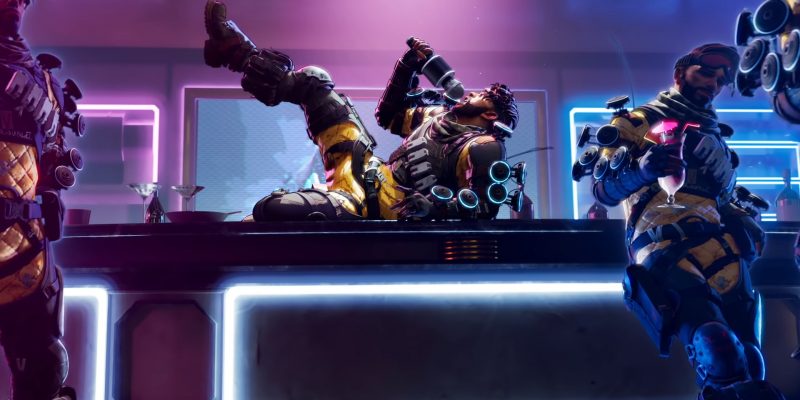 Respawn Entertainment has teased quite a few things coming in the next Apex Legends Legacy update. However, it seems like more and more Titanfall is being ushered into the first-person battle royale shooter. For starters, keen eyes noticed the tie between Titanfall pilot Viper being the father of Valkyrie, the newest Legend. Although Apex Legends exists within the Titanfall universe, it seemed as though both would live separate online lives. The latest teaser trailer muddies the waters with the tease of a new Apex Legends Arenas game mode and a familiar, not-so-friendly face.

The Apex Legends Legacy launch trailer opens with what we now know to be Ash.  She chimes in with, “You call yourself legends. Time for a new game.” We see an animated cinematic with Valkyrie hovering in and crackin’ Fuse with the newly revealed Bocek Bow. Also, is it just me or does she have some Pharah from Overwatch vibes? But the most interesting part isn’t the action nor the glimpse as to what Valkyrie will play like. Instead, the focus seems to be on a new game mode potentially being added on May 4 when the update rolls out.

What could Apex Legends Arenas be?

As the video animates out, we hear Ash comment: “Welcome to the legacy of the Apex Predators. Welcome, to the Arenas.” This also ties back to the Titanfall universe and the band of mercenaries called Apex Predators. Another interesting thing to note is the choice of the snow map mod that was retired after in lieu of the Kings Canyon and Olympus maps. And we know that too will see changes in the next update.

This leaves a lot to wonder as to what the update will bring. Not only do we have a former antagonist from the Titanfall franchise, but there is a tease of a new game mode. That doesn’t even account for the addition of Valkyrie and her family ties. The end result could be more lore to give the overall Apex Legends environment some sustenance and building it up as much more than a battle royale that exists in a universe. It could also be a way of continuing on the legacy of Titanfall in a new way with Apex Legends Arenas.

If that means slamming a bunch of Titans in an arena and have them duke it out, count me in. I guess we’ll all find out on April 26 with the next reveal trailer.