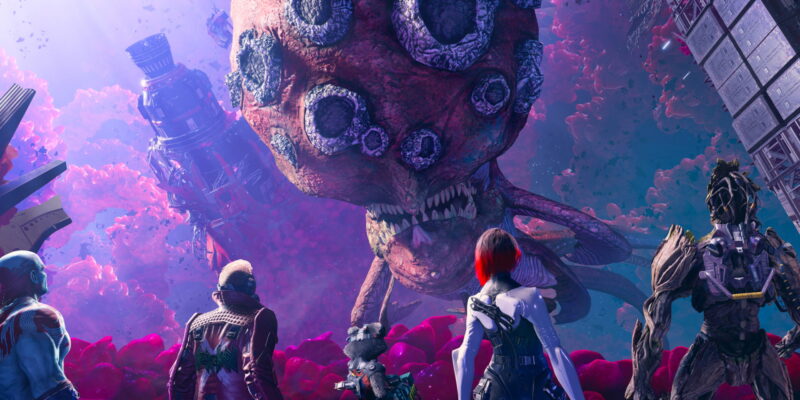 We are just about a month shy from the release of Marvel’s Guardians of the Galaxy, and that means new gameplay trailers. There’s no Spider-Man or Avengers member taking center stage here. Rather, the quirky, rag-tag group of galactic defenders known as the Guardians of the Galaxy are front and center, going on their own mainline adventure.

The team is led by none other than Star-Lord himself (portrayed by Chris Pratt in the feature films) as they barrel through space, one adventure at a time. However, with Star-dude in the driver’s seat, you might wonder, “What do Rocket Raccoon, Drax, Groot, and Gamora do?” To further chisel things out game mechanic-wise, these two new gameplay trailers show off what exactly the leadership mechanic looks like in the game and offers up some insight into how the combat will play out.

The commands Star-Lord is able to give are reminiscent of the Marvel Ultimate Alliance games. Meaning, players can command their squad to perform defensive, offensive, or joint attack moves. Each member of the Guardians of the Galaxy has their own expertise and traits. For example, Rocket being Rocket is a heavy-hitter when it comes to guns and big things that make boom. This might come in useful in situations where multiple enemies flood the screen and you’re just wanting to use Star-Lord’s jet boots to escape harm. Groot plays more like a defensive tank, providing cover, stunning enemies, and is even able to wrangle opponents together for a big strike. Another of Groot’s traits is the ability to revive your squad when they’re down.

On the other end of the spectrum, Drax the Destroyer is more of an offensive tank. Drax is described in the trailer as the “wrecking ball” of the crew and seems like he lives up to his name with the big damage he can cause. This might leave weakened enemies for the agile striker, Gamora, to deal damage to individual opponents. Lastly, Star-Lord seems the most balanced out of all the players. He can melee, fly, and issue first-class blaster shots to the face. However, his skill set will evolve throughout the game as there are four unlockable elements to support his abilities. Each character will have skills to unlock with the use of skill points.

Outside the punching, shooting, and blasting, there’s the space exploration aspect to Guardians of the Galaxy. It seems like your ship is more than just a hub to drop in while you’re not on a mission. There are unlockables to be found among other creatures to interact with. It seems that Square Enix is taking notes from its own playbook with Tomb Raider-style platforming puzzles.

To further deepen the experience, what you do and how you carry yourself in the depths of space will have consequences. Interactions with NPCs and your teammates will deliver dialogue choices and consequences for what’s said in those interactions. This can also impact the relationship between you and your fellow guardians in-game. Marvel’s Guardians of the Galaxy releases on October 26.