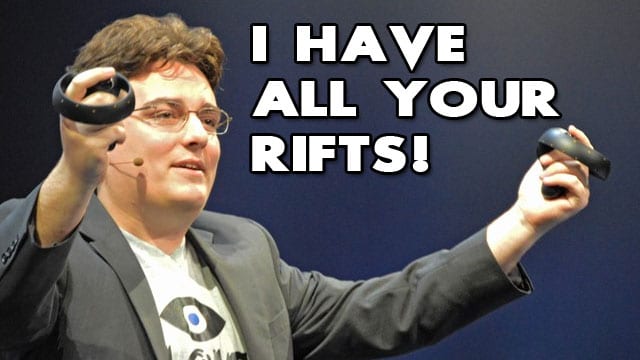 The end of March was a big deal for VR enthusiasts who jumped into the world of VR seconds after the Oculus Rift pre-orders page went live. The question many customers are asking is “where is my Rift?”

28 March has come and gone. It was only last week on launch day that Palmer Luckey posted on Twitter stating that the deliveries would be delayed. Five days later and the customers who were quick on the draw find themselves stuck in the dark not knowing when their pre-order units will arrive.

The Oculus Reddit channel has burst into life with customers complaining that there’s been zero communication from Oculus about the delays and that there appears to be no structure in place at Oculus to deal with queries or hand out information.

Today social media plays a big part in sharing information but it seems strange that Oculus are using channels such as Twitter and Reddit to pass on the little information they want to make public to customers who have just spent six hundred dollars plus on a piece of hardware.

The Rift headsets that have landed on customer’s doorsteps have been sent to Kickstarter backers who received a free headset to thank them for their early support which was a great gesture from Oculus. That doesn’t help the paying customers who are wondering where their orders are in the pre-order system. Some of these customers have become more frustrated and restless on Reddit today.

The only way customers know if their order is coming appears to be when their credit card is charged and there’s no real information on when delivery can be expected if a card hasn’t been charged. So when will that be? April? May? Customers are not quite sure.

Oculus founder Palmer Luckey has been popping on to Reddit periodically but has been unable to provide any real answers. The latest piece of correspondence tucked away in a Reddit thread reads:

“Not really. Don’t shunt blame to other people, this is my call. I am not going to wax poetic about this, since I have done so in the past, but bottom-line: I won’t give in-depth updates on any situation without knowing it is solid, true, and finalized. Until I can do so, the best I can do is remind people that I will get them information as quickly as I can.

“In the rare occasions when things still change, even when they change for reasons out of my control, I get crucified anyway. Sometimes that means updates have to wait until things get locked down, and sometimes that means waiting a little longer to give everyone good info.”

Palmer has been a little more careful with his choice of words since his comment that the headset would likely cost around $300. That bit him badly on the backside when the final price was announced.

The lack of communication is now causing some customers to second guess their decision on whether to buy a Rift or a Vive. If you pre-ordered a Rift today you probably wouldn’t see it until June or July. If you pre-order a Vive today you will receive it in May. I know this because I just ordered a Vive for PC Invasion this afternoon. And no, we have not ordered an Oculus Rift in case you were wondering. HTC could cock-up deliveries too but we won’t know that for a few more days at least.

To understand how big the backlog of orders actually is, pre-orders made in the first minute appear to have only started to be processed this evening.

It doesn’t look like there’s an abundance of Rifts out in the wild which is also borne out by the lack of comments in the Oculus support forums which you would think would be awash with troubleshooting questions.

It’s been a long wait for the Oculus Rift and it looks like Oculus were simply not prepared to deal with their customers. This lack of communication could cost them business.

Romance of the Three Kingdoms XIII on PC in July

By Kurt Perry12 hours ago
Features