Path of Exile has been on a roll. The release of the Betrayal expansion has led to acclaim from many of its ardent supporters. It’s led to an influx of newcomers to Wraeclast as well, even peaking at over 120,000 concurrent players. If you’ve enjoyed what Betrayal had to offer and your interactions with the Immortal Syndicate, then fear not because these will be part of the core content. Moving forward, however, Grinding Gear Games will have something more in store. Enter Path of Exile: Synthesis, the latest expansion to the ever-growing action RPG.

You can watch the trailer for Path of Exile: Synthesis below. If you’d like to read up on some additional questions from our preview/interview, you could head over here as well.

Memory, All Alone In The Moonlight

Path of Exile: Synthesis introduces you to a brand new NPC, Cavas. The mysterious and ghostly apparition has forgotten his past save for a few key details — note that his name is actually Latin for “hollow,” as his memory is but a husk you’ll need to unravel. Cavas tasks you with unlocking his past via the Memory Nexus.

This interconnected web functions much like the Atlas of Worlds in that each zone is a separate dungeon that you’ll need to explore. Unlocking more of Cavas’ memories lets you learn more about his story and his connection to Wraeclast. 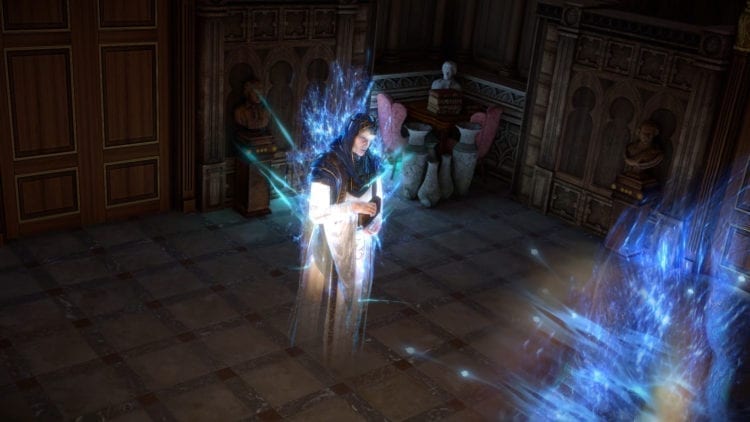 The ghostly Cavas needs your help to figure out who he is and where all the good fishing spots are.

Given that you’re accessing someone else’s memory, it will slowly fragment and decay. While you’re killing monsters and traversing the dungeon, a “wall of blue of death” slowly envelops you. You’ll need to fight your way to stabilize these areas. Some areas might have three or four of these stabilizers, and more of these means higher difficulty as well.

The dungeons in the Memory Nexus disappear over time if you keep re-running the same areas though you can repair them. Likewise, they all have their own modifiers, and you can even piece together new pathways to unlock faraway sections. You can even “amplify” a memory node to double the effect of mods. Naturally, additional modifiers mean extra difficulty, tougher bosses… and more loot! 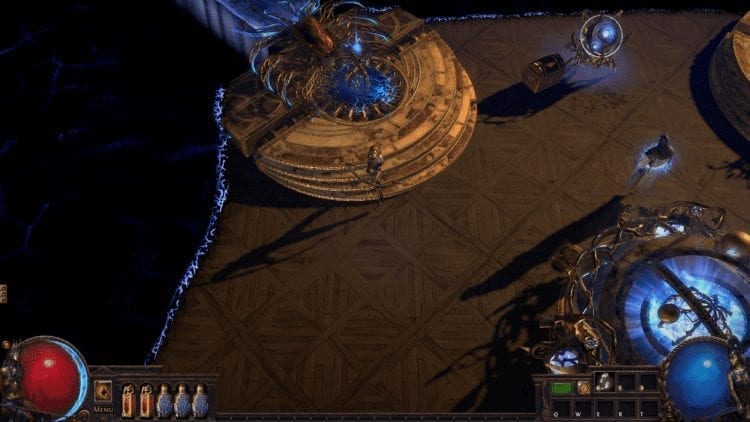 According to Grinding Gear Games’ head honcho Chris Wilson, the Memory Nexus gameplay would emphasize its high-risk, high-reward nature. “If you’re a super experienced player who can handle the tougher mods, then it’s better to chain a lot of these areas together to get more value for your time,” Wilson said.

As for newcomers or those looking to do casual runs, the Memory Nexus will also offer a considerable yet manageable challenge. You could opt for shorter runs until such time that you feel you’re ready. 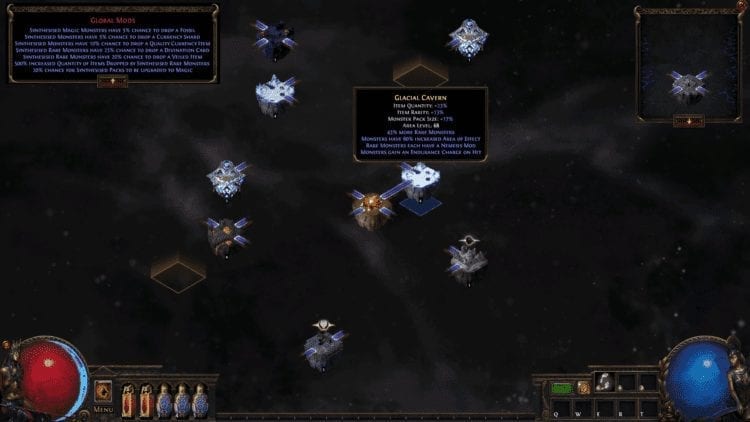 You can try to piece together a route that leads to a memory node and more rewards.

Another factor is the rewards from each memory node. If there’s a reward that’s close enough, you can just go for it quickly. Some rewards/memory node locations, though, will require longer pathways that you need to traverse.

Given that the memory dungeons require a lot of movement to get past the decaying wall, I also had to ask Wilson about loot drops. It’s possible to spot something shiny on the ground, distracting you long enough to lead to your doom, right? Wilson assured me that it wasn’t something to worry about:

In decaying memories, enemies don’t drop items as you kill them. That way you don’t get distracted from evading that wall of blue of death. Instead, once you get to a stability point, that’s when all the items drop.

Looks like stabilization points would also be a good spot to use the town portal if you need to stash or modify your items. In any case, take a look at a quick run through one of Cavas’ memories:

Finishing Cavas’ memories will reward you with “Fractured Items.” These are pieces of weapons or armor that have mods locked in place. You’ll need to collect Fractured Items of the same type, combining them to create something new.

This is where the “Synthesis” happens as these Fractured Items can yield results based on the implicit mods of the items you choose. Chris mentioned that there “will still be a degree of randomness involved,” but, more importantly, there’s also “determinism” knowing that you’ll have more control over the implicit mods that you can get. The new system lets you get the implicit mods you want before you even start using Chaos Orbs to change explicits.

Grinding Gear Games know that Path of Exile players enjoy the crafting aspect (and the joys and frustrations each roll can bring). If ever you do find a Fractured Item with great mods already in place, then that’s one helluva lucky moment. That’s because all you’ll need to do is re-roll the bad ones to come up with something extraordinary. 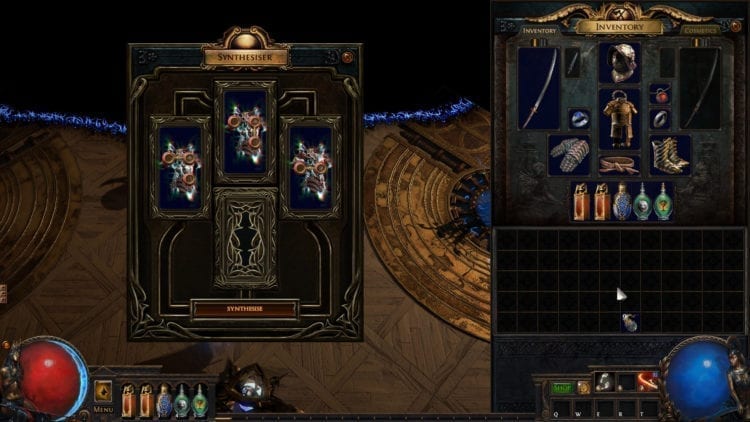 Three Fractured Items can be synthesized to create something entirely new, with different implicit mods, before you even start re-rolling explicits.

Speaking of Chaos Orbs, or rather Chaos in general, Path of Exile: Synthesis will introduce a number of new Chaos-based spells. One of these, which you can see in the video below, is the “Soulrend” spell. The spell causes Chaos damage-over-time to targets near it. You can mix and match support gems to your liking allowing it to fire multiple projectiles which is great for packs of mobs, or slow it down more so that it spends more time on a single target. Soul Rend is intended to be a sort of “one-stop shop” for those wishing to try the Chaos Spellcaster archetype. As Wilson noted:

We’d hear of players seeing a Chaos build on YouTube or Twitch, but it takes a while to master. Usually you’d have to cast a spell here, a spell there, and another on a group — acting like a combo of sorts. Soulrend would be a good introductory spell for the Chaos Spellcaster archetype before you move onto more complicated combos.

Apart from Soulrend, we were also treated to a short video (seen below) showcasing the “Divine Ire.” It’s a brand new Holy attack for the Holy Spellcaster archetype. Holy spells combine physical damage with elemental spells like fire or lightning — and a bit of wrathful smiting as well. Divine Ire charges faster depending on the number of enemies before unleashing a blast from the heavens. That means lining up your attack first then firing it to maximize damage. It’s also possible to charge it via the trash mobs around you then blasting a boss full on the face with your own “Holy Hadouken.”

The Soulrend and Divine Ire are just two out of six new skills coming to Path of Exile: Synthesis. There will also be a handful of support gems to complement your style of play.

The Chaos Spellcaster and Holy Spellcaster are new archetypes being added in Path of Exile: Synthesis. These spellcaster archetypes focus on “handcasting” their magic attacks. These additions work alongside a revamp of certain skills to make handcasting more viable for players. As to the design philosophy behind this, Chris Wilson noted:

Diversity is in character builds is the lifeblood of Path of Exile. We have around 40 skills and spells in the game, but players are only using a handful of powerful ones. Charts would tell them which ones are better and which ones aren’t. We’re doing a game-wide rebalance of spells to make every spell viable and interesting.

Wilson also mentioned that, more often than not, players would prioritize builds using totems, traps, or mines, even cast-on-damage effects. While the developers appreciate players going more in-depth with certain mechanics, they also want to incentivize the playstyle of casting spells manually.

It also helps that the skill revamp happens in Path of Exile: Synthesis with the Memory Nexus activity. Imagine having to go from one end of the map to the other, with hundreds of enemies along the way — you’ll no doubt want to just drop totems or debuffs and run past everyone. With the skill rebalancing, however, it would also make it more tempting to use abilities that require manual handcasting. Check out the video below to show some handcasted spells in dungeon runs:

Path of Exile: Synthesis will add 16 new unique items. One of these is The Eternity Shroud (seen below). The unique chest armor triggers the “Glimpse of Eternity” effect when hit. This causes a time bubble to appear around the player, slowing down enemies by up to 40 percent. It can change the dynamics of the game since you’d want to go around catching enemies inside a bubble to deter them.

Our design philosophy with new uniques moving forward. We want them to impact the way you play the game.

Moving forward, Grinding Gear Games have a lot in store for the rest of the year. Naturally, they’re still following their three-month release window for new expansions:

The big month, however, is November. That’s when the first-ever ExileCon takes place in New Zealand. Wilson noted that that’s when the team will announce Path of Exile’s “mega expansion.” I pried for a few more details whether this would be a paid expansion, or perhaps a subscription model. Wilson assured me that it will still be free-to-play. Not only that, he added:

The mega expansion will be our answer to Diablo 4. Whether [Diablo 4] gets made or [whenever Blizzard plans on releasing it], we’re still going to make this mega expansion and it will be awesome. Think of it as raising the quality of Path of Exile to 2019 quality, uniformly, across the board.”

That should do it for all the info you’ll need for Path of Exile: Synthesis. However, I was able to ask more in-depth questions regarding its mechanics, effects on community and trade, the Diablo: Immortal/Immortal Syndicate connection, and even Tencent. You can check out those additional notes here.

If you’d like to get in on the fun before Synthesis is even live, maybe take a trip down in Wraeclast to learn the mechanics, you can check out Path of Exile’s official website as well.

Tell Capcom What You Thought About The Resident Evil 2 Remake