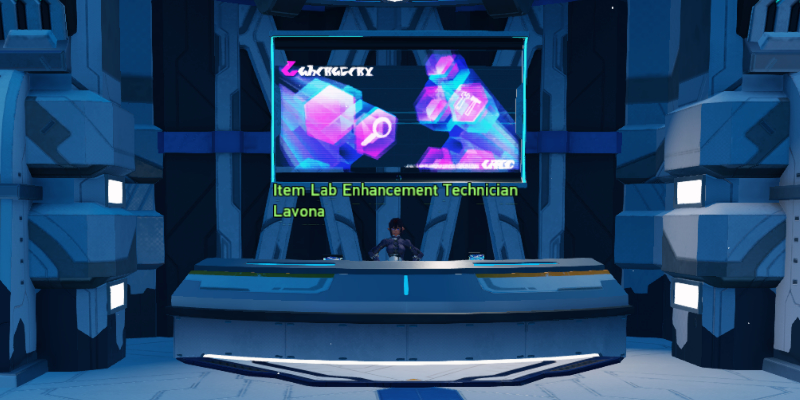 At least for now, the main grind players can work towards in Phantasy Star Online 2 New Genesis is improving their equipment. The first and arguably most important step to do that is getting all of your gear up to a +40 level enhancement. However, PSO2 New Genesis doesn’t explain how to enhance weapons and armor overly well. Without the right approach, it’s possible to waste hundreds of thousands of N-Meseta.

It’s important to understand that most equipment isn’t worth enhancing. Any gear that isn’t at least four-star is usually a waste to place resources into. Even a fully upgraded three-star weapon isn’t all that great once a four-star equivalent is obtained. Upgrading lower-tier weapons may be required to increase Battle Power for quests but should be avoided otherwise. Also, all enhancements require N-Grinders, so it’s a good idea to stock up on them in advance.

By MMORPG grinding standards, weapons in PSO2 New Genesis are relatively easy to level up. Taking a four-star weapon up to level 40 will cost less than 200,000 N-Meseta. Given the huge DPS improvement this provides, it is a must-do for all players.

The best way to enhance weapons in PSO2 New Genesis is to use Silver Primm Swords. Silver Primm Sword commonly drop from enemies found at Mt. Magnus, Vanford Laboratory Ruins, and Resol Forest. Although you can purchase them from the Personal Shop, it is more cost-effective to find your own by chaining PSE Burst at these three locations. 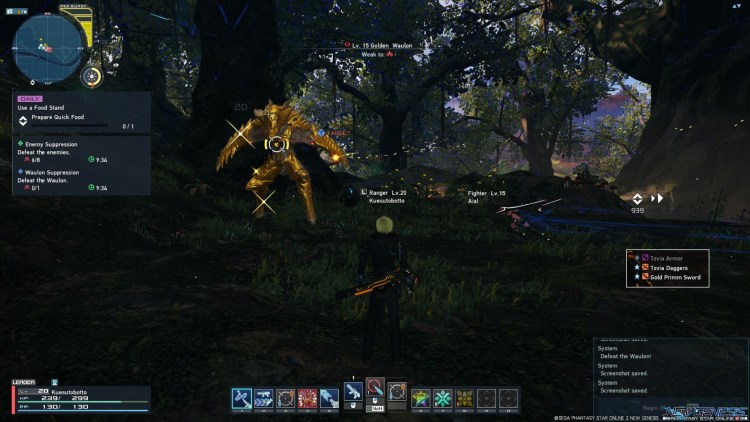 Both Golden and Silver enemies have an increased chance to drop Silver and Gold Primm Swords. Prioritize them over other targets when given the opportunity.

In PSO2 New Genesis, both Silver and Gold Primm Swords provide extra progression when used to enhance weapons. Nevertheless, it is a waste to use Gold Primm Swords as they are rarer and can be given to the Item Trader for “N-Augmentation Success Rate 10%+.”

After collecting a large amount of Silver Primm Swords, head to the Item Lab Enhancement Technician in Central City. There, you can upgrade weapons through enhancements, unlocking potential, equipping augments, and limit breaking. 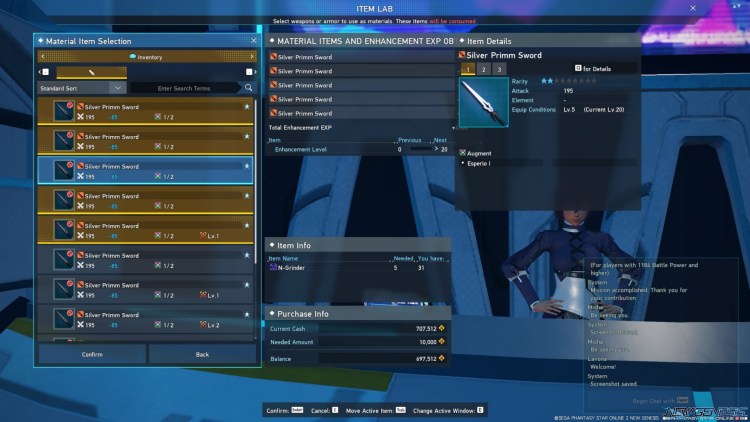 Every enhancement has a 10% chance of triggering a great success. If triggered, this vastly increases the levels gained from that enhancement. Therefore it’s cost-efficient to enhance one sword at a time rather than using several at once.

Unfortunately, the best method to enhance units up to +40 in PSO2 New Genesis is less practical. Unlike weapons, there are no silver or gold units, so standard armor drops have to be used instead. Although still doable, this means that taking a single unit up to +40 can cost over three times as much as doing the same with a weapon.

Given that every player has to level three different units, this can get expensive. For free-to-play players especially, this will take a while as gathering the required N-Meseta can be difficult. Regardless, there are still ways to minimize costs in the long run. 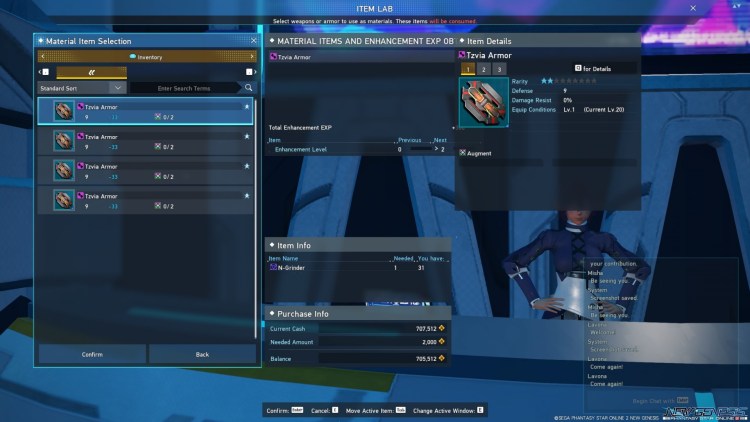 Instead of Silver Primm Swords the best option for units is to use Tzvia Armor. This is a two-star unit that is once again a common drop from Mt. Magnus, Vanford Laboratory Ruins, and Resol Forest. Players may find it worthwhile purchasing some from the Personal Shop as farming enough for all three units will take a long time.

The process is near identical to the Silver Primm Swords method. Take a Tzvia Armor and enhance it with a different, second Tzvia Armor. Repeat this process until the original Tzvia Armor obtains a +20 level enhancement. Then use the “Tzvia Armor+20” on your four-star unit of choice. 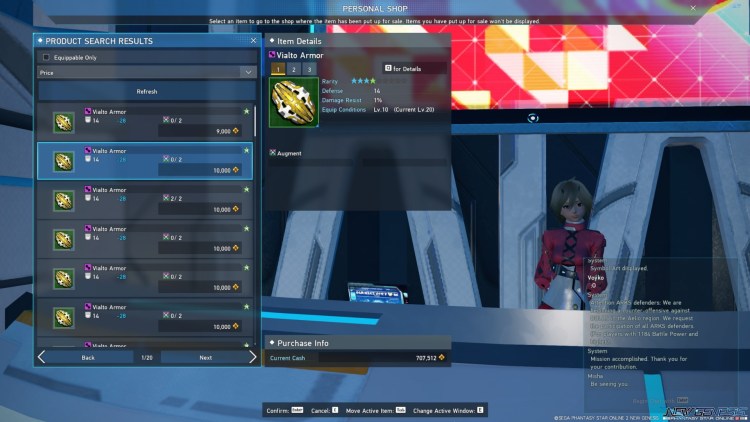 At 10,000 N-Meseta each, using four-star shields is an expensive but fast method of enhancing units.

An alternative method is to use higher-tier units to speed up the process. You can apply the same method to Tzvia Armor but with three-star units instead. This is faster but more expensive due to the increased rarity of three-star units.

The most expensive method to enhance a four-star unit in Phantasy Star Online 2 New Genesis is to use other four-star units on it. Equipment in New Genesis receives an enhancement progress boost if the item used is of the same tier. Purchasing enough four-star units to reach +40 isn’t going to be cheap but can be done in a fraction of the time of the Tzvia Armor method.