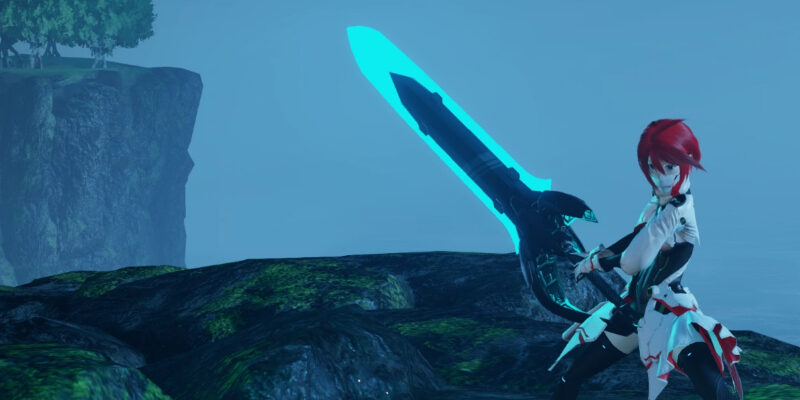 There are six classes in Phantasy Star Online 2 New Genesis, all with their own unique playstyles. Understanding how these classes interact and how to get the most of them is vital in becoming the best player possible. This guide focuses on the game’s tank class. In PSO2 New Genesis the go-to tank is Hunter, an especially durable melee class.

The sword is the best all-around weapon available to the Hunter class. It is a jack of all trades melee weapon that allows for unmatched transition between defense and offense. Its impressive up close DPS and its surprisingly strong utility make up for the lack of range. 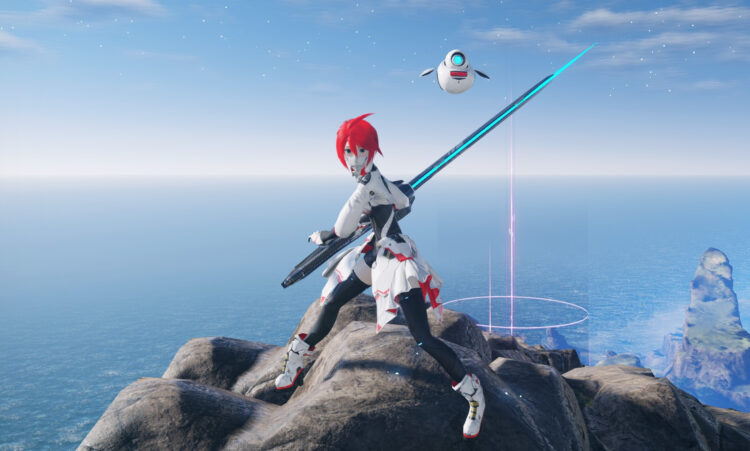 The sword’s weapon action is Guard. It is a timing-based ability that allows you to block and parry an enemy’s attack. After successfully blocking an attack, you will jump towards and hit the enemy with two hard-hitting swings. Although difficult to master, this is one of the best weapon actions in the game.

The partisan trades away the sword’s power in favor of superior mobility. It is a fast and light weapon that can deliver a series of blows in quick succession. Unfortunately, the partisan uses too much PP relative to its DPS. Furthermore, missing just one attack usually means that an entire combo will end up off target. For these reasons it isn’t the best choice for the Hunter class. It should only be used by players looking to try out something new. 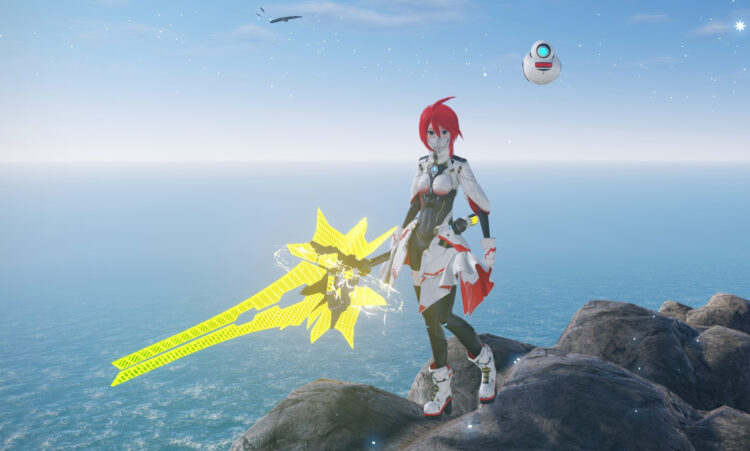 The partisan’s weapon action is a standard attack that deals moderate damage. It isn’t that great DPS-wise, but it can be used to animation cancel out of Photon Arts. This is useful if you get stuck in a lengthy animation and need to cancel it in order to dodge an incoming attack. After purchasing the Volkraptor skill, the weapon action can also be charged to unleash a wave of spears that stick to enemies and explode after a set period of time.

The wired lance isn’t a particularly great primary weapon, but it is the Hunter’s best secondary. When multi-weaponed onto a sword, it offers great area of effect damage potential and alleviates the sword’s biggest drawback. It has a substantial effective range and is an excellent choice for clearing out large waves of mobs quickly. 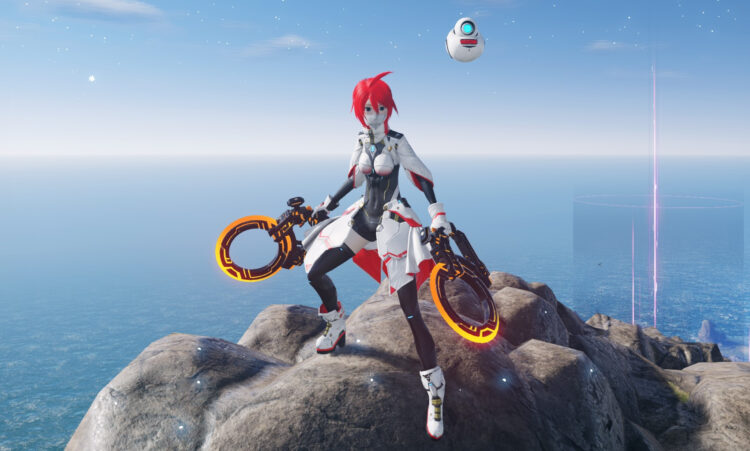 The Hunter has two main class skills: War Cry and Hunter Physique. War Cry is the primary aggro tool for the hunter class in PSO2 New Genesis. It doubles the aggro drawn per attack when active. The main use of War Cry is to have enemies face you, as this makes countering their attacks easier.

Meanwhile, Hunter Physique reduces damage taken whilst active by up to 70% depending on how many skill points are invested into it. It is best to either spend one point to get the 50% reduction or skip Volkraptor and put the remaining second point into Hunter Physique. Investing more than two points into this skill is not worthwhile. 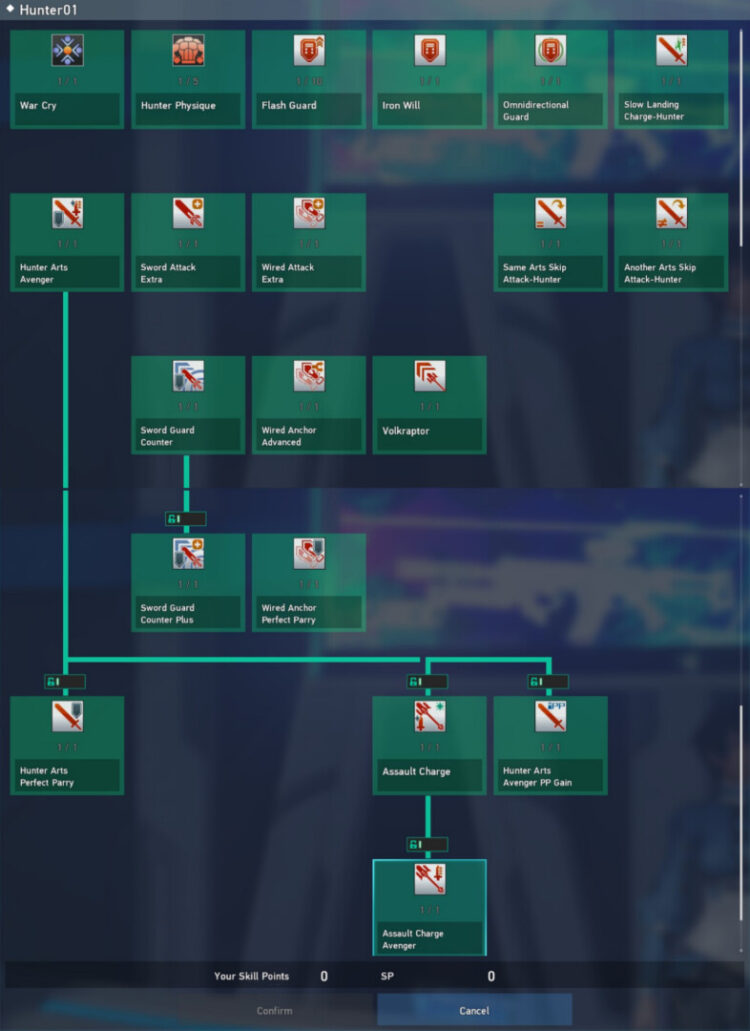 Putting one point into Flash Guard provides a flat 10% damage reduction with no drawbacks. Every point spent after this only provides a further 1% damage reduction and is therefore not worth investing in. To maximize the hunter’s tanking capabilities, unlocking Iron Will is a must. This skill makes it so that an otherwise incapacitating attack will instead knock your HP down to 1, providing an opportunity to heal up. This allows you to spend more time dealing out damage rather than lying on the floor waiting to be revived.

As there are enough skill points to do so, purchase all the remaining, unmentioned skills when possible. The order they are unlocked isn’t overly important but prioritizing quality of life skills like Omnidirectional Guard, Sword Attack Extra, and Sword Guard Counter can help. Consider looking through each skill individually to decide what suits your playstyle and weapon choice. The Hunter skill tree has a lot of skills specific to either the sword, partisan, or wired lance, so players may not find it optimal to copy our recommended skill tree.

The hunter class in PSO2 New Genesis has a large variety of decent photon arts. However, only three are required to achieve respectable DPS. For the sword, both Calibur Streak and Twisting Zapper are the best Photon Arts available. Twisting Zapper is a spiraling attack that is used as the sword’s primary engagement. Charging it up to deals extra damage, but this isn’t usually necessary. The main use of this Art is to close the gap on an enemy in order to use other more powerful Photon Arts.

The best DPS Photon Art available to Hunter is Calibur Streak. This Art unleashes three powerful slashes for the price of just one. It is very PP cost-efficient and can be used three to four times in succession to deal huge burst damage. This is a great choice for damaging downed enemies with exposed critical hit spots.

If using a multi-weapon sword/wired lance combo, the only wired lance Photon Art that matters is Vane Mixture. This is the best area of effect Photon Art for the Hunter class and is excellent for clearing out large groups quickly. Consider using this to farm PSE Burst zones and to clear out mobs quickly in Urgent Quests.

The above suggestions assume the use of a sword/wired lance multi-weapon. However, if only a wired lance is used then you’ll want to rotate Vane Mixture with Cutting Layer. The former is best against groups of enemies whilst the latter is the best single target Art on the wired lance. As for the partisan, either Cleaving Scythe or Fatal Tornado can be used when targeting multiple enemies at once. Thrusting Javelin is the go-to for any single target scenario including boss fights.

Unlike tanks in most MMORPGs, drawing aggro is not overly important in New Genesis. Of course, keeping bosses away from backline Rangers or Techters is useful but this is more of a secondary concern. Instead, a good Hunter player should focus on using their extra bulk to survive big hits and deal damage in scenarios where other classes can’t.

An example of this is the Varas boss fight. Varas has a special attack where it spins around and hits everyone in its radius, damaging and knocking over anyone in range. But if Hunter Physique is used beforehand you become immune to knockback and only take a fraction of the damage. This allows a Hunter to keep damaging the boss and hitting its critical spot when other melee classes have to back off for a few seconds. 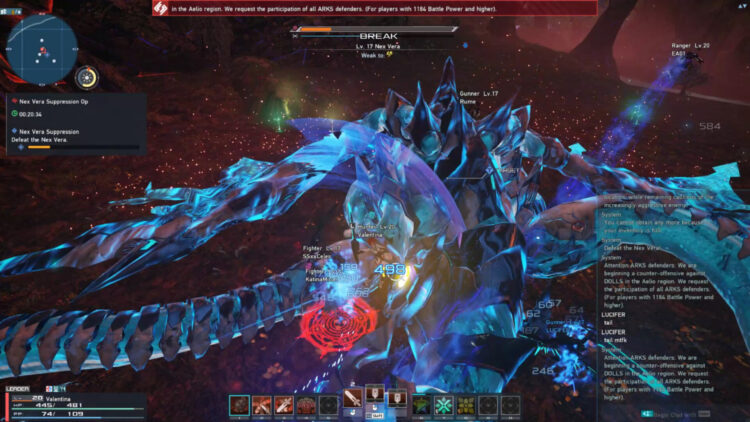 Learning how to counter effectively is a must for those looking to optimize DPS output. The timing can be a little tricky to learn, but it’s incredibly satisfying once you begin to chain parry attacks one after another. This is perhaps the biggest selling point of the sword over its competitors. Since the partisan doesn’t get access to a parry and deals less overall damage than the sword, using it is not recommended. It’s possible that a future update may buff the spears but for the time being it is one of the weakest weapons in the game.

As with all the classes in PSO2 New Genesis, Hunter benefits from the multi-weapon system. Personally, I’d recommend a sword/wired lance combo as the sword can parry and deals great single target damage whilst the wired lance can be used for mob farming. It can be worth having two separate enhanced weapons: a sword for just bosses that prioritizes potency and damage and a secondary multi-weapon that is used for PSE Bursts and mob farming.