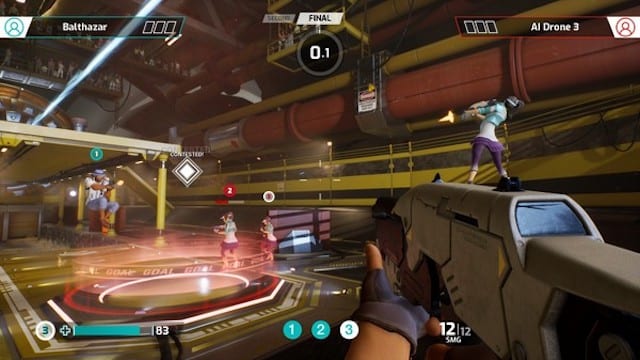 Looking for a twist on the typical first-person shooting experience? Then Nimble Giant Entertainment will have something for you to try later this week with Quantum League. The time-twisting multiplayer game will get an open beta test through Steam starting later this week on February 21. This beta will run through March 2, giving players more than enough, ahem, time with it.

Quantum League is dubbed as a “time paradox shooter,” one with a competitive frame of mind. Players will take on each other while trapped within a time loop. They’ll need to work alongside their past and future selves in order to take down the opposition with utmost efficiency.

It’s actually a hook that’s built into “the face of professional sports as we know it,” according to the game’s official description. With the sport practically taking over the world, you’ll fight to keep your place in it as a Quantum Athlete. But obviously, time will be on your side as you work with fellow versions of yourself to take down the competition.

Will you join the game in time?

You’ll need to be careful as you plot your next move over the course of the game. If you’re working with your past selves, you’ll need to watch your step and plan your next strategy. And that can also have an effect when it comes to your future self as well.

The open beta will serve as a chance for players to give Quantum League a try before it launches into Steam Early Access later this year. It never hurts to practice ahead and make yourself a more, ahem, timely player before the final release.

Those interested in signing up for the open beta can do so here. Hop in, and we’ll see you in action. Don’t forget to bring your watch.

Want to learn more about Quantum League in the meantime? The trailer below should give you a better idea of what’s to come.