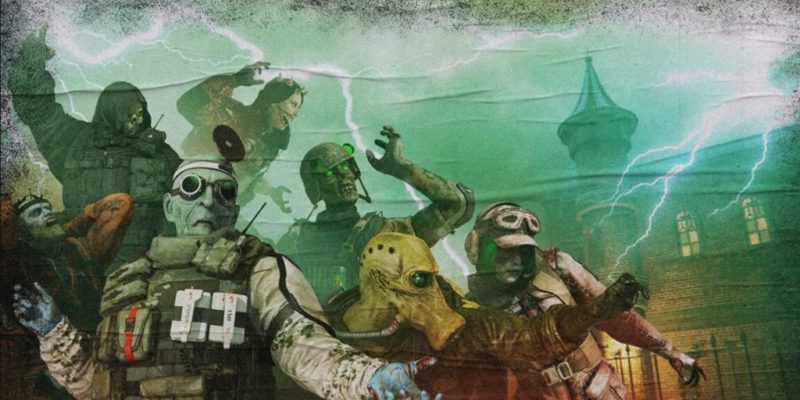 Rainbow Six Siege is no stranger to themed events. The recent cowboy and toy-themed events were both unexpected delights. This time horror is the name of the game. The Doktor’s Curse Halloween event starts today and runs for the next two weeks.

Some serious effort and goofy lore have been packed into Doktor’s Curse, as expected from the precedent set by the last two events. Everyone’s favorite spawn-peeker Doc has gone a little nutty. He’s set up shop in the soon-to-be-reworked Theme Park map and is using it as a base to perform all sorts of horrific experiments. He’s been making monsters out of his fellow operators. It’s up to a crew of exterminators to go and grab these ghoulies.

This new limited-time game mode is basically high stakes hide-and-seek. There are no guns and no melee. Both attackers and defenders will need to rely on their new modified kits to survive the night.

Smoke, Kapkan, Frost, Lesion, and Ela have all received serious makeovers for the defender team and retain their usual traps. Defenders will also have a special new ability called Nightstride. This will turn them invisible and increase their speed for a short time.

The attackers are made of exterminators carrying unique versions of Sledge’s hammer. To help track down their fiendish prey, each will also have access to a special gadget borrowed from Jackal, Lion, and Pulse. Jackal’s Eyenox Model III visor allows the tracking of an enemy via their footstep trails. Lion’s EE-ONE-D drone can locate anyone who happens to be moving when it scans. Pulse’s Cardiac Sensor can spot heartbeats through walls and floors.

The game mode is fast-paced with two-minute rounds. The frantic nature of it probably won’t hold you for too long, but winning 13 (spooky) rounds will get you a free cosmetic item.

The Doktor’s Curse event brings with it a smorgasbord of new horror-themed skins. Unfortunately, as is tradition, none of these can be purchased directly. They are only obtainable through random alpha pack loot boxes. Your first pack is free, and you can obtain a second by winning 13 rounds of the new Doktor’s Curse game mode, but after that, every pack needs to be purchased.

That wouldn’t be so bad, but the complete collection is absurdly expensive. Getting all 28 packs costs over $60 in the real-world money equivalent, Clancy Bucks. There is an option to purchase using Renown, the in-game earned currency. But that too is absurdly overpriced at over 300,000 points. (For perspective, I’ve earned a little over 80,000 renown this season playing regularly for about two months.)

It’s an insanely big ask for Ubisoft to want players to spend six months’ worth of grinding on Rainbow Six Siege skins that you can only get for two weeks, especially when you can’t even choose which skin you want. That’s the scariest part of this whole event.

If you want to get in on this spooky happening, it is live now. Hurry though. This event is only running from Oct. 23 to Nov. 6.