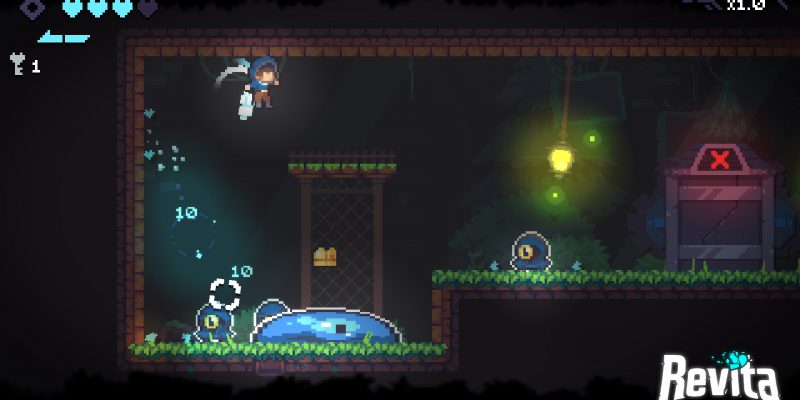 Revita is a 2D roguelike shoot ‘em up that released into Steam Early Access at the beginning of March, but the developers are keeping the progress going. BenStar, the solo developer of Revita, and publisher Dear Villagers (the same publisher as ScourgeBringer) have just released the first major Early Access update titled Beasts and Bees.

This update adds a bunch of additional content to the twin-stick shooter. It’s also just the first of several updates planned for release. With the Beasts and Bees update, Revita gets two new NPCs, a brand-new Celestial weapon, an unexplored branching path, 18 more relics, and frogs.

As with all updates, there is also a range of tweaks, bug fixes, and quality of life improvements. Many of the upgrades have been adjusted to create a more balanced experience. Plus, you can now skip dialogue, zoom out to get a better view of a level, bypass mashes and holds, and you can restart more quickly when you die. You can also now dash towards the mouse.

For those who enjoy a bit of hoarding, you’ll be pleased to know what Revita also now has more achievements and collectibles. If you’ve never heard of Revita or have been toying with the idea of picking it up, you can check out our initial impressions of the twin-stick shooter. The basic premise of the game has you playing as a young boy who needs to climb an ominous clock tower to retrieve his lost memory.

You climb through a series of procedurally generated rooms and fight challenging bosses along the way. To improve your chances of success, you can trade health for randomized upgrades. It’s a delicate balance between sacrifice and reward.

Revita is currently available for PC through Steam Early Access. Along with the Beasts and Bees update, BenStar also released an early access roadmap for Revita that gives players something to look forward to in the next update. There will be an entirely new area, some new gameplay mechanics, and more.