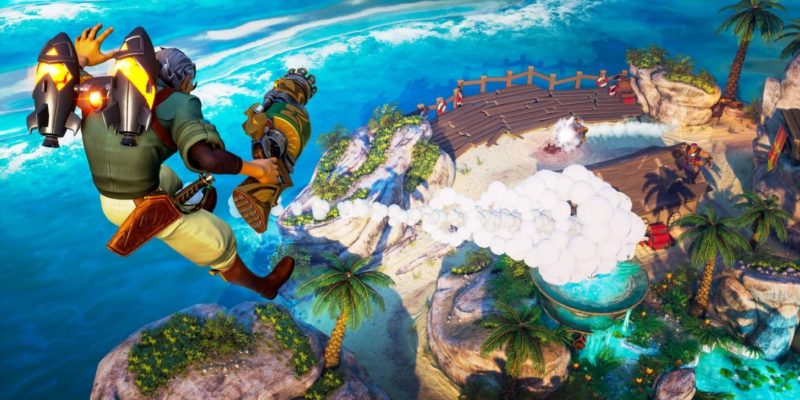 Rocket Arena is an upcoming arena shooter from Final Strike Games and Electronic Arts. The 3v3 rocket-fueled brawl sees a diverse roster of heroes battle in a wide variety of environments. In the latest trailer from the Rocket Arena team, viewers receive a tour of the 10 maps scattered around the world of Crater. All 10 of these arenas will be available when the shooter launches on July 14, and more are already under construction.

Players will battle on a floating airship, bubbles at the bottom of the ocean, and an Amazonian temple. You can also visit a snow-covered castle, dinosaur bone-littered wildlands, and a futuristic plaza in the amazingly named Boom City.

It’s almost magical how varied the different locations scattered around the world of Crater are. It’s like they’ve been constructed by a fairy tale writer. Which coincidentally, they have. Rocket Arena‘s world and lore were created by Len Uhley, a writer on some classic Disney shows in the 80s and 90s. Older gamers might remember some Uhley’s works, such as the wonderful TailSpin and DuckTales.

You can clearly see Uhley’s hand at work in the Rocket Arena World of Crater trailer. It gives off a distinct Disney impression.

You can check out the 10 maps scattered around the world of Crater in more detail on the Rocket Arena website. Once there, you can also check out the 10 heroes available at launch. They range from magically gifted, to tech-savvy, to a little too excited about rockets. A new hero will join Rocket Arena for free with every season.

Rocket Arena will launch with four modes. There’s the competitive Knockout mode, which requires you to blast your opponents out of the arena with rockets, abilities, and items. Rocketball mode is a lot like soccer, but with one key difference: rockets. Your team needs to take a ball and score in the opponent’s goal.

Mega Rocket is a zone capture mode that will have you capturing giant rockets that fall from the sky. Finally, Treasure Hunt mode requires that you score more points than your opponents by holding a treasure chest or picking up coins. Knockout, Rocketball, and Mega Rocket all have a ranked mode for the more competitive payers out there.

Rocket Arena is already available for pre-purchase. You can pick it up for PC via Steam or Origin.