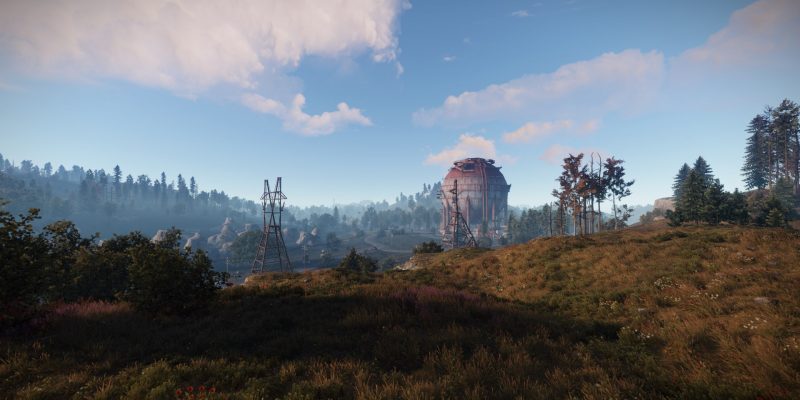 It’s been a while since I really dove into the open-world, online survival game Rust. It was one of the earlier examples of the genre, sending dudes in their underwear to do battle against radioactive bears for a chance at loot or blueprints. The game was later redesigned from the ground up, offering more world biomes, better equipment, and more crafting/building options. It also looked better, graphically. However, today Rust got a whole-new visual overhaul in its World Revamp update. Terrain, trees, and more have all been reworked. The developers at Facepunch Studios also threw in a new toy: a crane for turning vehicles into scrap.

Rust really looks like a whole different game after its World Revamp update. The game has entered into the modern era of graphics with reworked assets across its world. As mentioned, rocks, water, grass, décor, and monuments have all been vastly improved. The team didn’t just update the graphics, however. In the announcement post, Facepunch showed a before and after picture of the desert biome, which demonstrated clear improvements on cliffs and higher-density flora population.

Facepunch has also attempted to alleviate issues in some areas. The example it brought up was Bandit Town, “known for one if not the worst performance area.” Rust‘s World Revamp update aims to fix this with new hut models, while shaving down the number of trees and NPCs. As part of the World Revamp update, Facepunch also solved some lingering problems ranging from world generation to exploits.

Want more scrap? We know how you can get more scrap. In the revamped junkyard, Rust now has a magnet crane and a massive (honestly, scary looking) shredder to turn old cars into scrap. The trailer above shows the process. First, you drive your junker to the yard, and then jump into the crane’s operator cab to drop that trash into the shredder. It appears to be a fun way of getting scrap, so long as you don’t mind losing some wheels in the process.

There’s plenty more that comes with the World Revamp update for Rust. Check out the rest of the patch notes to learn about all the changes.