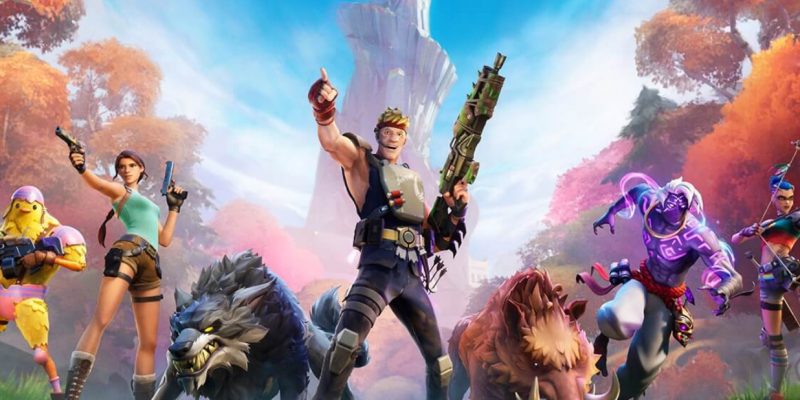 A new season of Fortnite means we’re fresh off another end season event with plenty of new changes to dig through. Speaking of digging, we have plenty of details to go through and a few bones to pick with Epic’s latest changes to Fortnite in Chapter 2, Season 6. All in all though, we’re pretty fired up for the Primal season.

Fortnite ended Chapter 2 Season 5 with another big event, this time called the Zero Point Crisis Finale. The Zero Point that levitated above the center of the map last season began to tear away at reality and caused a lot of trouble. During the event, you are tasked with closing several portals across the island to stop reality from tearing apart. This event also allows you to experience some of the new Season 6 changes in an introductory manor and also samples the Battle Pass skins, which are both firsts for Fortnite.

Aside from introducing a genius marketing strategy, Epic also progresses the narrative. One of The Nine (a mysterious group of powerful beings in the universe of Fortnite) shows up to save the day. He and Jonesy basically get lost in time, but manage to save the day. What’s leftover is an island altered by space and time. There are strange crystalline towers around the map where the rifts touched down, along with one massive tower in the center of the map. The Zero Point appears to be stable at the top of the tower, but it also wiped out advanced technology before it went dormant. That’s where the Primal theme comes in.

As is the case with all new seasons, there there are tons of changes to take note of. This is definitely another one of the larger departures from previous iterations of the game. And if you missed out on the previous season, you’re really about to be blown away. There are now more wild animals roaming the island, tons of new weapons, crafting mechanics, and new points of interest to name of few. You’ll also note that gold bars are still part of the game, and NPC vendors are back again with 46 to seek out this time. Most players should be familiar with the concept of Mythic weapons and items by now, and there are more of those too. There’s a lot to cover, so let’s get into it. 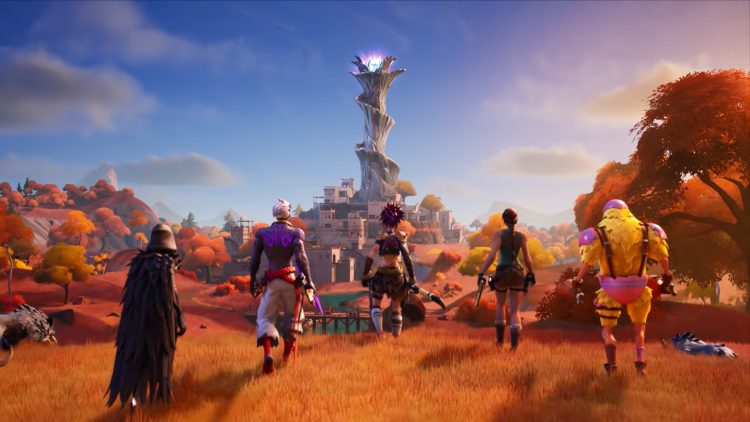 From the moment you load into the map, you’ll notice the game is running much smoother. Fortnite has been experiencing degrading performance over the past year at least, but Epic seems to have finally brought things back up to par with what you’ll remember. The first match will still feel a bit choppy, but you’re in for smooth sailing once the textures and assets are all loaded in. The in-game UI is different now too, which largely benefits controller players. It looks more modern and offers more functionality, though some may miss the classic look.

You’ll next notice that the map looks quite different now. There’s an autumn-like biome in place of the desert that extends from the center of the map to the various aforementioned crystalline towers around the map. There are also three new points of interest. The Spire, Colossal Crops, and Boney Burbs. You’ll see some familiar sites around these areas. The Spire is largely new though. 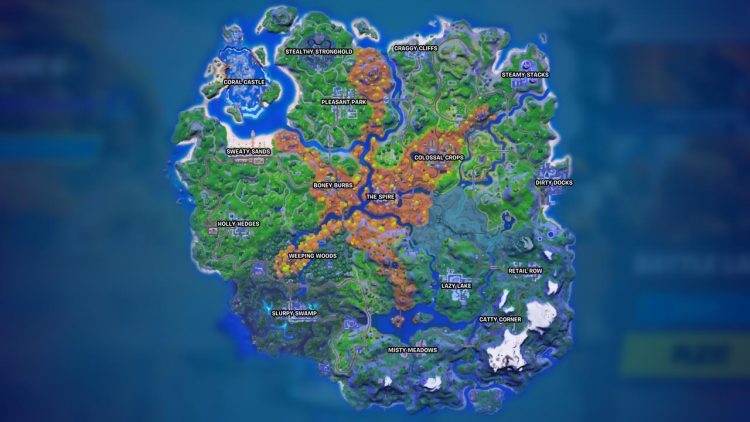 Weapons and items to evolve

You’ll want to understand all of the new weapons and the crafting system before you dive into too many games. At first glance, things will be quite confusing. Just know that makeshift weapons are basic, general purpose weapons. They aren’t great, but are common. Fortunately, you can craft new weapons with relative ease to match your playstyle.

Here is a general list of weapons and items in Fortnite Season 6:

As you can see there are many upgrade paths and Mechanical and Primal weapons go up to Legendary status. The specialized bow types are particularly unique, and you’ll need additional items to create them. If you prefer a more direct approach to getting better loot though, you can visit NPCs to upgrade or go and find hidden Doomsday weapon stashes. 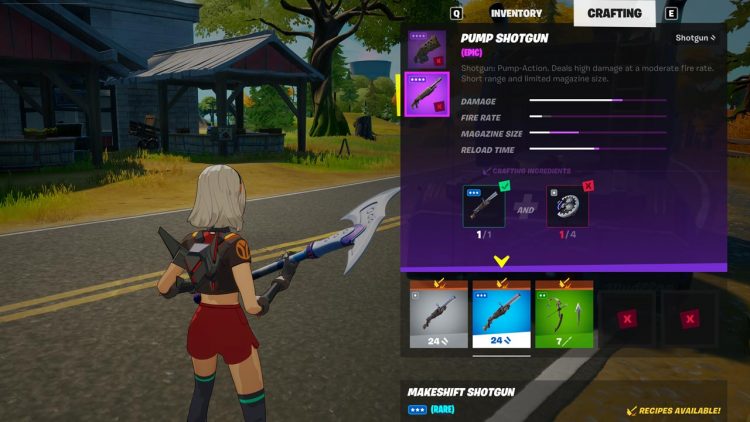 A brief look at the crafting menu.

As already mentioned, there are 46 NPCs in this season to find. They still offer Bounties with Gold Bar rewards, act as vendors, and offer challenges like dueling them for weapons. There’s not a whole lot in the way of exotics to buy right now, but more options will likely arrive as the season progresses.

To craft weapons, you’ll need either Mechanical Parts or Bones. We’ll cover this in greater detail in a crafting guide soon. As a general rule of thumb though, car-related objects around the map will offer Mechanical Parts. You’ll need to hunt animals for Bones.

You can also interact with the animals in various ways. Aside from the bones needed for crafting, animals will drop Meat. This is a health consumable, but it can also be used to lure other animals, which can be tamed if you so choose. You’ll also find Stinky Sacks if you shoot the frogs. Try out fishing as well. There are a few more options you can wrangle now. And don’t forget to catch a chicken. You can use them to glide over long distances. Your feathered friend might just save you from the Storm. 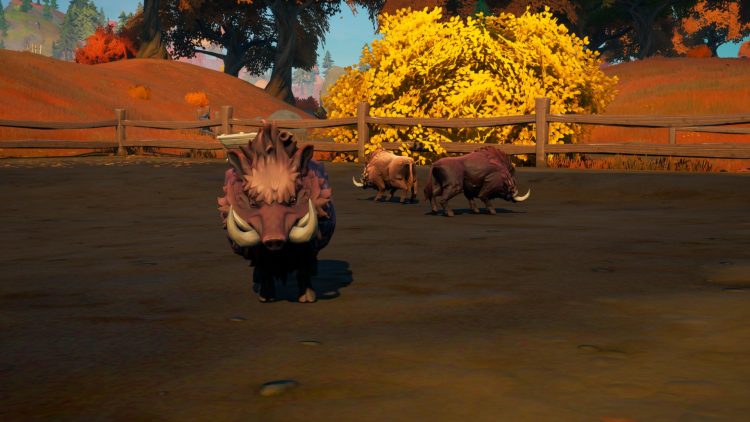 Aside from the main spire in the center of the map, there are smaller towers that offer a few unique sights to see and are generally worth visiting. You can either land directly on top of them for some easy starting loot, or approach on foot. Either way works, as there is a launch pad on the top to propel you towards the center of the map. This can be particularly useful for escaping the storm, as the launch also lets you redeploy your glider. You might want to snoop around the areas around the towers though, as Spire Guardians protect them and offer guaranteed Epic weapon drops plus an item that allows you to jump indefinitely (when held) like you’ve consumed Hop Rocks. These AI aren’t pushovers, so be prepared to face them.

You should know by now that this is just the beginning of Fortnite Season 6, as Epic loves to introduce changes throughout the seasons to keep things fresh. We already know that vehicle upgrades and new weapons are coming, but it appears dinosaurs will hatch soon as well. Check back for more guides, news, and walkthroughs as the game continues to evolve. Quite literally.

The Doom Slayer’s saga could continue, according to Doom Eternal director Hugo Martin