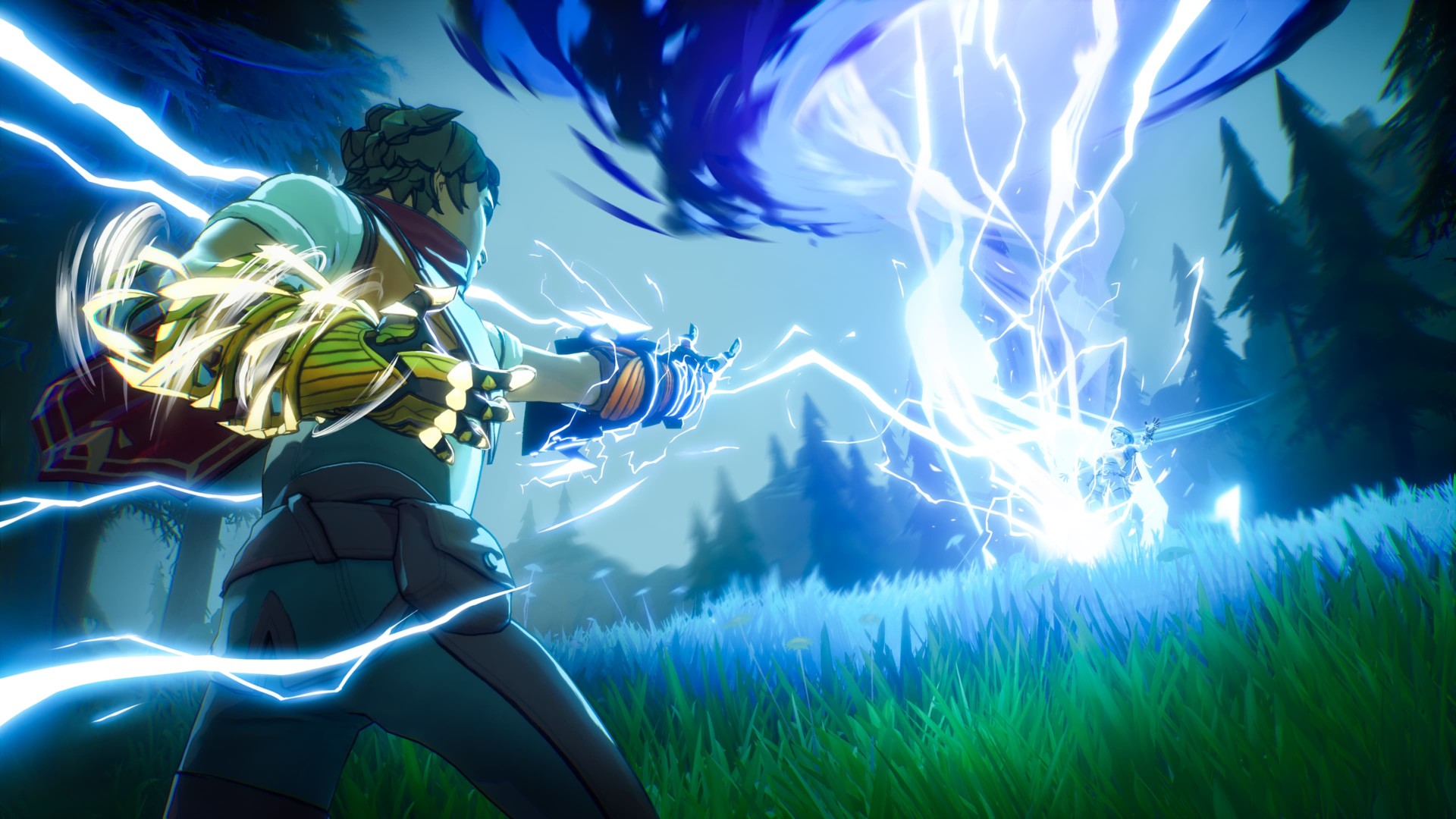 I have a Spellbreak guide talking about which class is the best in the game right now. Spoiler: it’s the Stoneshaper. However, all the classes are viable and, in the right hands, can be incredibly powerful. Picking which class to play is only part of being the best Vowbreaker. To truly reign supreme in Spellbreak, you need to know the best Gauntlet combinations to choose as your secondary for each class.

Choosing the best Runes and Talents will also go a long way to help you dominate the Hollow Lands. If you need help making some decisions, I’ve got guides that cover which Runes you should use and which Talents are the most powerful. I’ve also got a general Spellbreak tips and tricks guide that will help you land on your feet when you dive into this magical battle royale. 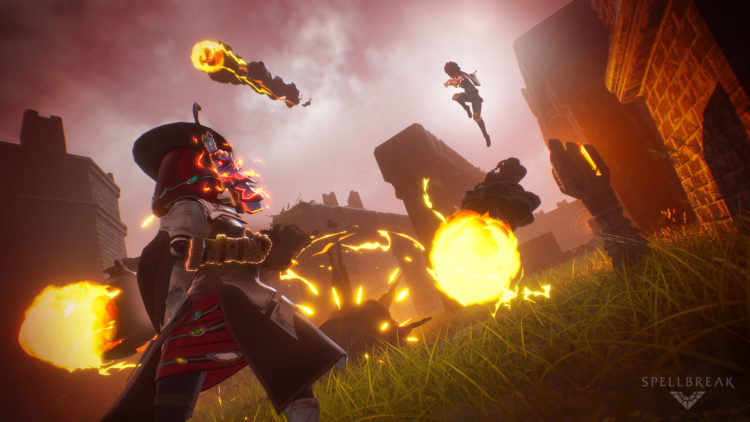 Let’s start with the powerful and user-friendly Stoneshaper. Your Stone Gauntlet excels at close range, ground-based combat. Boulderfall, your Sorcery, will allow you to deal damage a bit further away. However, it’s still going to be limited to opponents on the ground.

A Stoneshaper’s secondary Gauntlet needs to make up for its lack of range and aerial ability. That leaves you with two choices. The Frost Gauntlet is probably your best bet, providing you some potent long-range damage. Plus, its Sorcery, Flash Freeze, will allow you to block projectiles and briefly lock players onto the ground.

The Lightning Gauntlet is also a solid choice. Its primary spell is excellent for medium-range damage and it can hit aerial targets. Its Lightning Strike Sorcery also deals with flying pests very well and will prevent opponents from attacking you for a few seconds.

The enemy probably would have escaped if I didn’t have the Lightning Gauntlet.

The Toxicologist is up next because it falls into a similar category as the Stoneshaper. Its Toxic Gauntlet is devastating up close. However, it is terrible at long-range combat. The Toxicologist isn’t too bad in the air, you just need to get right next to your target.

There are multiple options with the Toxicologist. You can pick either the Frost or Lightning Gauntlet for the exact same reasons as the Stoneshaper. However, Lightning allows you to shock your toxic puddles and Toxic Cloud Sorcery to briefly prevent enemies attacking. Frost will cause your Toxic Cloud to freeze, which can be used as a defensive barrier. Personally, I love the Lightning Gauntlet.

However, Toxicologist has another excellent elemental combination: Dragon Fire. This is the green flame you see when fire and toxic combine. If you run the Fire Gauntlet as your secondary, you can ignite your Toxic Cloud for massive damage or spray your Flamewall with toxic to create Dragon Fire flames. If you’re confident you won’t blow yourself up, this is one of the best Spellbreak Gauntlet combinations.

Based on what you just read, you already know the best Gauntlets to pair with the Pyromancer’s Fire Gauntlet is the Toxic Gauntlet. If you like the fiery style of the Pyromancer, you’re going to love Dragon Fire even more.

You could also consider running the Stone Gauntlet with Pyromancer. Its Shockwave and Boulderfall can be ignited by fire to deal extra damage and your ground-based prowess will be immense. However, I enjoy being able to create my own Dragon Fire more.

You can see the Shockwaves picking up the fire and dealing extra damage.

With the Pyromancer, you just need to learn to master hitting flying targets with Fireballs, which move a lot slower than Ice Lance or Lightning Bolt. If you’re really struggling with aerial players, consider the Lightning Gauntlet. Don’t use the Frost Gauntlet, its abilities counteract the Fire Gauntlet’s abilities.

The Frost Gauntlet is a good partner for almost all the other Gauntlets. The two exceptions are Fire and Lightning. As I mentioned, Fire and Frost don’t combine, and your abilities will cancel each other out. As for the Lightning Gauntlet, it is good at the same distance as Frost, which will leave you vulnerable in close-quarters fights. It’s redundant using Lightning with Frost.

My personal choice to pair with Frost is Toxic. The close-quarters spray of the Toxic Gauntlet allows you to finish off enemies you snipe with Ice Lance. It also combines well with Frost’s Flash Freeze. You can get in close to an enemy, freeze them, and then hit them with a full Toxic shotgun. Plus, if an enemy gets close to you, which will happen often in Spellbreak, Toxic is one of the best Gauntlet combinations to deal with them.

I play a lot of Tempest and I find the thing the class lacks the most is burst damage. One big attack that can finish off an opponent. If you can hit your shots, the Frost Gauntlet can be a solid option with its Ice Lance. However, consistently nailing hits is tough and, if you’re missing a lot, you’re better off going with something else.

I think the Toxic Gauntlet is a better pairing for the Wind Gauntlet. When a Stoneshaper is constantly regenerating shields or a Toxicologist is trying to hit you point-blank, having your own Toxic Gauntlet as a counter is very strong. Its Sorcery, Toxic Cloud, also gives you another damage source, where the Ice Gauntlet’s Sorcery is more defensive. Plus, you can throw toxic into your Tornado for a little extra harass. The Fire Gauntlet is another solid option if you’re good at hitting targets with Fireball.

The Toxic Gauntlet is excellent at finishing enemies.

In the hand of a Conduit, the Lightning Gauntlet is a damage behemoth. It’s excellent at fighting at mid-range and can be used to pick off escaping targets, too. Whichever secondary Gauntlet you choose to run with Conduit will not be your main source of damage. With that in mind, the Conduit could benefit from a short-range burst damage attack.

Again, you’re looking at Toxic or Stone. My preference is Toxic, because you can shoot Lightning Bolts into Toxic Cloud to shock opponents and prevent them from attacking. Also, Toxic is better against opponents who are good at avoiding Stone’s primary attack. 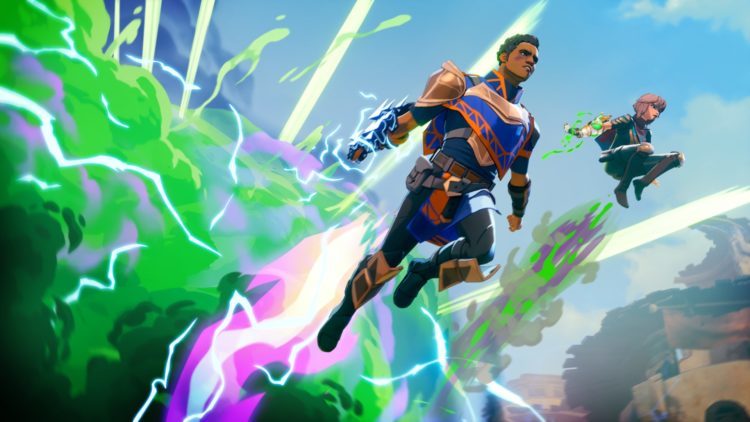 You probably noticed Toxic Gauntlet coming up a lot throughout this guide. It’s one the most powerful Gauntlets in Spellbreak and you can never go wrong using it as one of your Gauntlet combinations. It’s only a poor partner for Stone.

I prefer Toxic as a close-range, burst option over Stone because it can hit enemies on the ground or in the air, and better players are always in the air. Its only weakness is a lack of range, but you can solve that with good movement and your class’s primary Gauntlet.